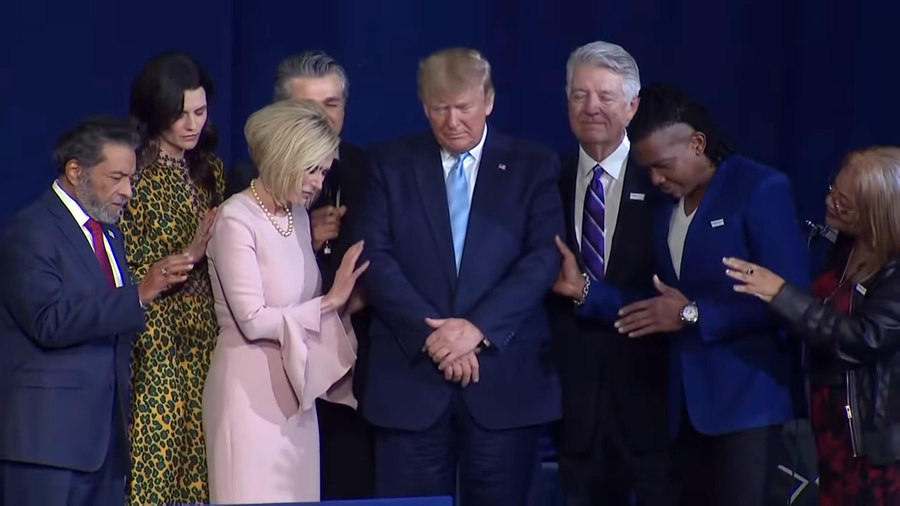 In this screengrab from video, pastors pray over President Donald Trump before he speaks at the "Evangelicals for Trump" coalition event in Miami, Fla., on Jan. 3, 2020.

By Christopher Corbett Published on January 27, 2020 •

Mark Galli is a self-professed “public theologian.” He is also the recently-retired editor of Christianity Today magazine. His swan song at CT was a December editorial that mangled the U.S. Constitution as he called for the removal of U.S. President Donald Trump. Now, in a Los Angeles Times opinion piece, Galli continues his attack by mangling the Bible.

In CT, Galli mangled the Constitution when he said that the impeachment case against Trump was “unambiguous.” He said Trump’s actions regarding the Ukraine were a “violation of the Constitution.” The obvious problems in Galli’s screed? An abundance of legal experts say Trump’s actions were not violating the Constitution. His duty as president, they say, includes trying to clear up possible wrong-doing by previous U.S. officials, including former Vice President Joe Biden.

At one recent Trump rally, held by a group called Evangelicals for Trump, the opening prayer included these words: “We declare that no weapon formed against him will be able to prosper and every demonic altar erected against him will be torn down” and that “he will rise high, and he is seated in the heavenly places.” In the Christian community, we call that idolatry.

Do we? Let’s slow down and take a look.

First, the prayer says, “We declare that no weapon formed against him will be able to prosper.” This is drawn from Isaiah 54:17, where God, through the prophet Isaiah, says, “No weapon formed against you will prosper.” The primary application is to national Israel. The Lord pledges that despite Israel’s sins, He will ultimately restore them. Their sins brought temporal judgement in the form of defeat by adversaries. But God says that one day He will restore them and set them over their enemies.

Christians have commonly applied this promise to themselves. It shows the character of God toward all the redeemed. He forgives their sins and rescues them from eternal death. He will one day exalt believers over a restored world (2 Timothy 2:12, Revelation 20:5-6). Therefore, He can protect them — whether now or in eternity — according to His purposes.

It is routine and accepted for believers to invoke this scripture for someone they believe is saved. Doing so is not “idolatry.”

Galli thinks that evangelicals for Trump risk the Christian witness in America. But isn’t greater damage done when a “public theologian” like Galli mangles the Bible to slur fellow believers?

Second, the prayer says, “every demonic altar erected against him will be torn down.” It is drawn from the biblical descriptions of spiritual warfare. God’s Word plainly states that demonic powers are involved in the conflict of nations. Ephesians 6:12 famously states, “For we do not wrestle against flesh and blood, but against principalities, against powers, against the rulers of the darkness of this age, against spiritual hosts of wickedness in the heavenly places.”

Further, Daniel 10:13-21 reveals a struggle between good and fallen angels involving national world powers. In 2 Corinthians 10:4 the Apostle Paul states, “For the weapons of our warfare are not carnal but mighty in God for pulling down strongholds.” Many theologians believe “strongholds” to refer to demonic power bases.

Yes, one can argue nuances about these interpretations. But one cannot deny that they are within acceptable Christian belief. This certainly isn’t “idolatry.”

Third, the prayer says that Trump “will rise high, and he is seated in the heavenly places.” Galli cries, Idolatry! But not so fast. Paula White, who gave the prayer, believes Trump is a saved man. And so she applies Ephesians 2:6, which says for all believers, God “raised us up together, and made us sit together in the heavenly places in Christ Jesus.” The verse connects back to Ephesians 1:19-21, where Christ — in whom believers “sit” — is pictured at the Father’s right hand.

So Paula White is not saying that Trump is some pagan demi-god seated above other mortals in heaven. She is saying that God sees him, like all Christians, as being “in Christ.” And Christ is seated on His throne.

Other Prayers for Trump

Why is Galli unaware of such accepted uses of scripture in the Christian community? Why, in fact, does Galli not comment on the other prayers for Trump at the “Evangelicals for Trump” rally? Various leaders gave prayers that included:

Why doesn’t Galli think these prayers are worth comment?

As a personal disclaimer, I’m not a Pentecostal. I have sharp disagreement with much of the theology of the leader of the prayer gathering, Paula White. I believe many Christian leaders have gone overboard in fawning praise for Trump, and this can risk our Christian witness.

But on balance, the Trump presidency has been excellent. It has given welcome protection for religious freedom for Christians. It has advanced biblical values in numerous ways. It is a firewall against a worldview that is zealously anti-God.

But Mark Galli seems allergic to scriptural balance. Last week Trump made plans to stand in frigid temperatures as the first U.S. president to attend the March for Life. As Trump made these plans, Galli sat at his keyboard — to attack, attack, attack.

Galli thinks that evangelicals for Trump risk the Christian witness in America. But isn’t greater damage done when a “public theologian” like Galli mangles the Bible to slur fellow believers?

Christopher Corbett is a writer and communications strategist working with an array of non-profit policy organizations and ministries. He holds a degree in political science from the University of Chicago.