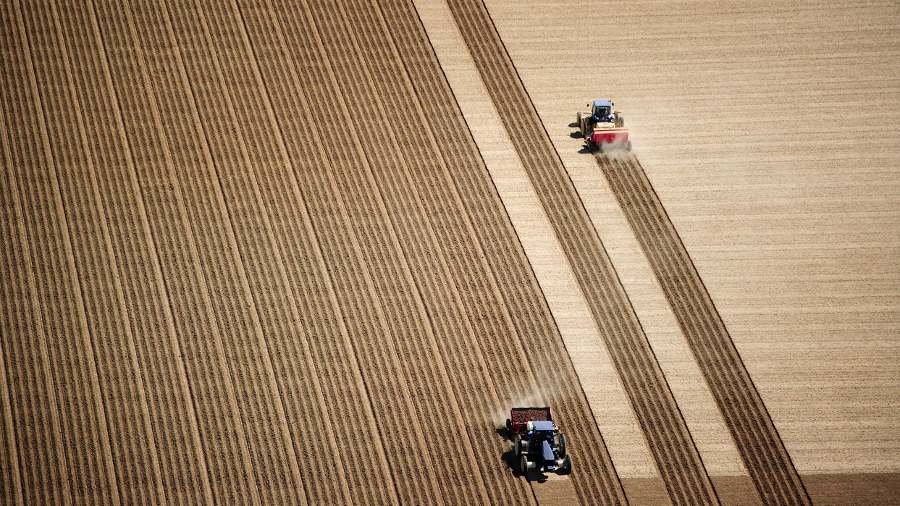 Satan’s next manufactured crisis in order to bring about government control and dependence in our lives could lie in the growing food crisis. The latest panic of no baby formula on the shelves is real. It came about with the combination of two actions: the control over the supply by the FDA by not recertifying the Abbott Laboratories (the largest manufacturer of baby formula), and a large portion of the supplies of baby formula in our nation being sent elsewhere by our own government — Ukraine and the border. These two actions have created a shortened supply of baby formula in our nation — a problem created at the hand of our own government. The baby formula shortage elicits fear like few other items in our food supply.

Creating dependence on the government for our food supply has been happening since government food programs began. BUT THERE IS MORE. Today we are seeing an exponential increase in controlling, altering and shifting our world’s food supplies. We need to pray into these “connected dots” as watchmen and intercessors. Read on to learn the scale of this move.

Earlier this year, we at Intercessors for America asked the question: “What is the danger of Bill Gates buying up massive amounts of farmland?” The Guardian reported, “The principal danger of private farmland owners like Bill Gates is not their professed support of sustainable agriculture often found in philanthropic work — it’s the monopolistic role they play in determining our food systems and land use patterns.” As we noted, “He’s not alone in the pursuit of farmland monopoly. China is also in the hunt and buying up land.”

They own the soil where the potatoes in McDonald’s french fries grow, the carrots from the world’s largest producer, and the onions that Americans sauté every night for dinner. But they’re far better known for their work in tech and in trying to save the climate.

Bill and Melinda Gates, who recently announced they’re getting divorced and are dividing their assets, are deeply invested in American agriculture. The billionaire couple, in less than a decade, have accumulated more than 269,000 acres of farmland across 18 states, more than the entire acreage of New York City. The farmland was purchased through a constellation of companies that all link back to the couple’s investment group, Cascade Investments, based in Kirkland, Washington.

In less than a decade, China’s stake in American farmland has grown exponentially. Records from the Agricultural Foreign Investment Disclosure Act show that Chinese acquisitions “rose from less than 10 annually” before 2008 to “12 to 25 each year during 2008-13.” In 2007, China bought six farms, all in California. The next year, they had bought 30 outside California, in Arizona, Texas and Missouri.

Even Amazon’s Jeff Bezos is entering into the farmland gobble, as well as other global magnates.

Archbishop Vigano directly states that destroying the agriculture in Ukraine was purposeful. (Ukraine is the food supply to Europe much like the heartland in our nation is for our country.) He stated in an address covered by Headline Prayer:

On the other hand, without the pretext of a war, how would they have been able to justify the soaring price of gas and fuels, forcing the process of an “ecological” transition imposed from on high in order to control the impoverished masses? How could they have made the peoples of the Western world swallow the establishment of the tyranny of the New World Order, when the pandemic farce was unraveling and bringing to light crimes against humanity committed by Big Pharma?

And while the EU and heads of government blame Russia for the impending disaster, the Western elites demonstrate that they even want to destroy agriculture, in order to apply the horrors of the Holodomor on a global scale (here). On the other hand, in many nations (including Italy) the privatization of waterways is being theorized — and water is an inalienable public good — for the advantage of multinationals and with the aim of controlling and limiting agriculture activities. The pro-NATO government of Kiev did not behave much differently: for eight years the Crimea was deprived of water from the Dnieper River in order to prevent the irrigation of the fields and starve the people. Today, in light of the sanctions being imposed on Russia and the huge reduction of grain supplies, we can understand Bill Gates’ enormous investments in agriculture (here), following the same ruthless profit-making logic already experienced with the vaccine campaign.

Enter in the suspicious fires and attacks on American food processing facilities as outlined in a story, 25 Mysterious Fires at Food Processing Plants by Israel 365 News:

President Joe Biden warned of food shortages in a press conference in Belgium following the G7 and NATO leaders meetings. We’ve seen prices rising on fuel, food, and more. According to the Consumer Price Index, food prices have risen nearly 10% in the past year. Fuel costs, incidentally, are up 30%.

The CEO of Goya, Bob Unanue, recently warned of a impending global food crisis, as he shared from his perspective the rising costs and geopolitical challenges. From his position in the food industry, he would have a better vantage point than most to see what is happening.

Shorting our Own Supplies of Baby Formula

Shelves empty of baby formula create panic for those families dependent on formula for their children. Interestingly, however, even thought the administration knew there was a problem in the food chain with baby formula back in February, pallets of baby formula have been sent from the U.S. to both the southern U.S. border and to Ukraine. Further creating a crisis at home?

Any one of these items could be concerning on its own, but adding all of these incidents over the rising globalist wrest for power and control (see story on WHO treaty) and it would be hard NOT to see a purposeful shorting of our world’s food supply.

We haven’t even discussed the other long-term flagged issues with Monsanto, GMOs, and other moves to drastically manipulate the world’s food. There has also been a movement to push for “analog” meat such as the BEYOND products, all while pushing to reduce the production of animal meats because of — you guessed it — the impact on the environment and the damage they claim animals contribute to greenhouse gasses. It comes back to the green agenda and the global control that it elicits. One of the companies producing non-animal food supplies is called “Soylent” reminiscent of the Charlton Heston dystopian movie you may remember called Soylent Green. It is unclear whether the company’s founders knew that Soylent Green in the movie was actually food cubes made out of people. But I digress.

The dots are screaming to be connected for this watchman, and intercessors: this situation needs prayer. We know that the Enemy of our souls desires for us to be dependent on our government instead of being dependent on God. Controlling the food helps control the people. We saw during the COVID situation how fear gave power to government entities to overreach on freedoms, privacy, and control. A food shortage would create a similar dynamic.

We are not powerless! We have hope! Being aware of the plans of the Enemy helps us to pray with insight. We encourage you to pray about this issue.

[IFA has created a prayer guide to help focus your prayer about this global issue. Click here to download and get to praying!]

Dave Kubal is CEO/President of Intercessors for America, a massive grassroots organization uniting over 300,000 citizens to pray, and then take action, on the issues confronting America. Equipping Christians to engage and speak truth into the important cultural debates of our day, Kubal is a nationally-recognized faith leader serving as a faith advisory member to former President Trump, and on the National Day of Prayer Task Force. With over 35 years of national ministry experience, Kubal is a seminary-trained ordained pastor and former Vice President with Fellowship of Christian Athletes.

What is There Really to the Ukrainian Biolab Story?