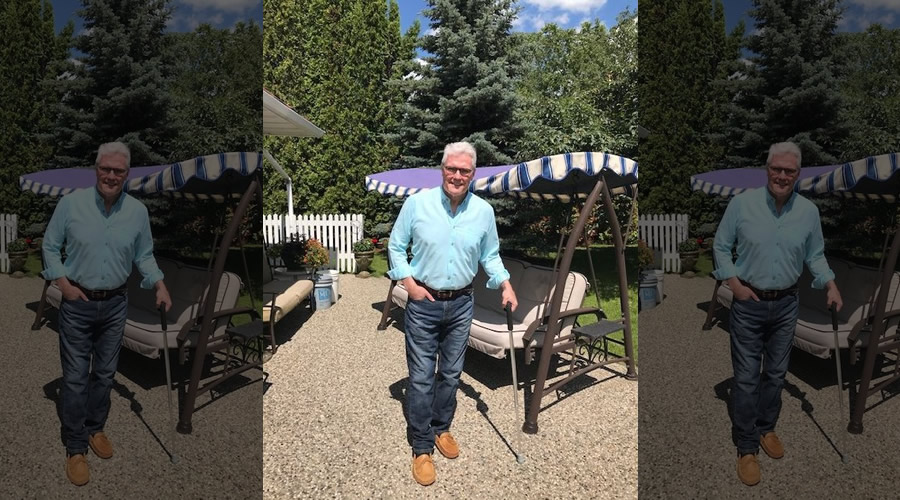 “I don’t know how people can live through MS — severe MS — without God. He’s pivotal to [my] story. Absolutely central. It was He who made sense out of that which did not make sense.”

He was diagnosed with multiple sclerosis in 1984, Mark Pickup told The Stream. Over time, the husband and father of young children lost the use of his legs and his right arm. He began to lose the use of his left arm too. Just a few years ago, he was on the verge of quadriplegia.

But then the miracle occurred.

The Diagnosis and Uncertainty

At first, Mark’s doctor thought Mark had a pinched nerve. The pro-life leader woke up one morning in the early 1980s to numbness from the waist down. His doctor sent him for physiotherapy. It went away, but then two years later came back. He then lost the use of his right arm. The doctor sent Mark for a brain scan, checking for a tumor. After much testing, his doctor told Mark he had aggressive MS.

It hurt his family. His daughter, 7, and son, 5, didn’t understand what was happening. They just knew that their dad was struggling with something terrible.

He was in a wheelchair full-time by 2003. “I couldn’t dress myself. I couldn’t tie my shoes. I couldn’t cut my meat from my meal. I had a hoist above my bed to help me get up in the morning and we thought about putting a hoist in the bathroom to help get me into the tub.”

Fervent Prayers and a Miracle

During one cold Canadian winter, Mark couldn’t get up the hill to his church. He asked the priest for something the church normally does not do. “I asked if I could have the Blessed Sacrament in my home in my room. Normally they don’t allow that. But he knew my situation and that I couldn’t get out. … I spent the winter months going before the Lord and saying ‘If it is possible, could I at least gain back my arm maybe? And if you can see your way clear, Lord, could I even walk a little bit? Even with a couple of canes?’ I left it at that but that was pretty much my prayer throughout the winter.”

One night he woke up. There was a presence in the room. “It was Him. Although it wasn’t audible, the message was clear. ‘Touch your little finger with your thumb.’ I hadn’t been able to do that in eons. My right hand was useless. And sure enough, I did touch it. ‘Touch it again. Do it again.’” Mark didn’t mention it to his wife, LaRee. He wasn’t sure how long it would last.

Then, in 2013, Mark heard God again. “I was sitting at the table one morning, having my morning coffee, looking out the window. My mother-in-law had died a number of weeks earlier. Her walker was in the corner in the kitchen. Again, that communication — not verbal — an understanding more than anything else. ‘Get up and walk with the walker.’ Of course, my response is I hadn’t walked in years. I’m just gonna fall. And again, ‘Get up and [walk] with the walker.’

He tried, and walked about 5 steps. “Pandemonium happens at that point and I’m calling LaRee to get up and look at my new athletic prowess. She got up and was stunned.” Before long, he was walking down the hallway with the walker.

He even showed his doctor. As she watched him get out of his wheelchair, he heard her exclaim, “No, no way! No, that’s impossible, it can’t be.” She sent him to a neurologist. The neurologist asked Mark to what he attributed his improvement. “How would I know?” asked Mark. “You’re the doctor!” While an MRI of his brain showed the effects of the disease, there had been no new activity since the previous MRI.

Mark wasn’t exactly happy. He said he felt swindled. “My most active years and productive years were spent fighting the disease.” He’d missed out on doing a lot of things with his children, like skiing. “It robbed me of 36 years of my best years and what was left? I’m an old man.” He asked himself, “Was this trial really necessary?”

Perhaps God allowed his disease to go into remission to remind that “we must not lose hope in even seemingly hopeless circumstances. That we must never give up on life because we do not know what’s around the corner. We do not know what tomorrow will bring, even supposed miracles, as rare as they may be.”

Faith and love played a huge role in Mark’s ongoing improvement. “Had I not had the love of my family and the love of God, I don’t know how I would have made it through this.” Mark wrote on his blog:

There are questions for which there are no answers, only understanding. There are questions that focus only on the meaning of life and eternity. The understanding they bring usually involves tears before joy, then perhaps both, or at least consolation. This is something those who have not yet suffered are unlikely to comprehend.

C.S. Lewis once said, ‘Can a mortal ask questions that God finds unanswerable? Quite easily, I should think. All nonsense questions are unanswerable. How many hours are in a mile? Is yellow round or square? Probably half of the questions we ask, half of our great theological or metaphysical problems are like that.’ Now he wrote that in a wonderful little book called A Grief Observed.

In the early days of 1980 when Mark first encountered Christ, he prayed that Jesus would make him more like Him and less like himself. That’s all that mattered. He questions if that’s all that matters now. “I must believe that that is what God has been doing — making me more like Christ,” he says.

It is a huge task for someone as vile and base as me. Major spiritual surgery has been required. I cannot ask ‘Make me more like Christ’ and then question the major overhaul when it starts to occur. If a purifying fire is required, who am I to complain about the heat? I must trust that there is a purpose in the suffering.

The divine love of God is behind the biggest questions of “why.” “It’s a mystery. I don’t understand and I’m not entirely sure that we’re supposed to understand this side of the grave.”