Lysistrata 2018? Sleazy Men Will Be All Too Happy to Oblige

Liberal gals may feel they're setting high standards for potential male companions. But sadly, they're playing right into the hands of a system that hurts women. 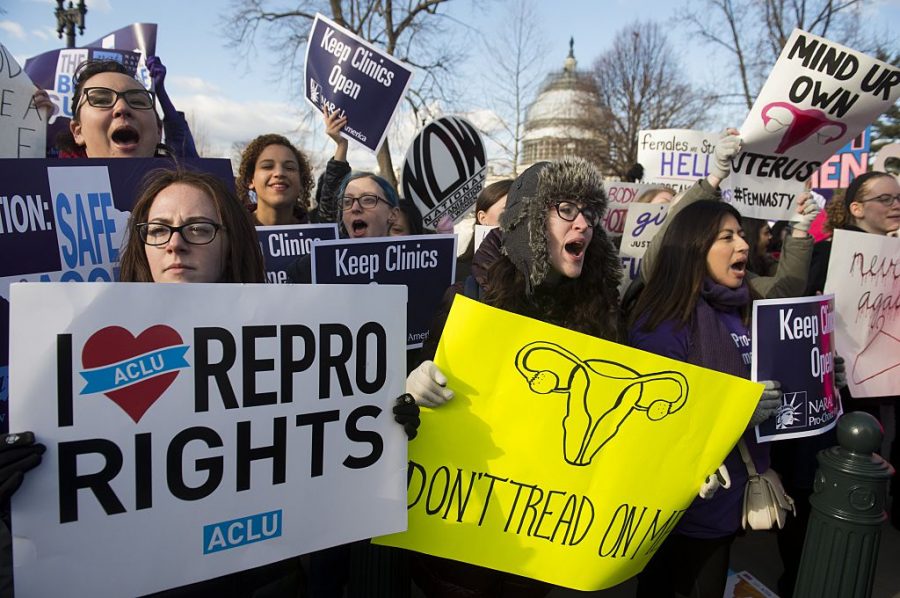 Supporters of abortion, as well as pro-life activists, rally outside the Supreme Court in Washington, DC, March 2, 2016, as the Court hears oral arguments in the case of Whole Woman's Health v. Hellerstedt.

President Donald Trump is set to announce his Supreme Court nominee on Monday, and people on the left are in a tizzy over the fact that the nominee will be conservative, raising the possibility that Roe v. Wade could soon be overturned.

One of the more puzzling reactions is the #Lysistrata2018 movement to oppose a pro-life justice. As Yahoo News reported, the movement is “named after Aristophanes’s ancient Greek comedy Lysistrata, in which women refuse to sleep with their warring husbands until they agree to a truce.”

Spearheaded by author and Harper’s Bazaar editor Jennifer Wright, it calls on women to refuse dates and sex with men who are not pro-choice. Here’s the tweet that started it all:

Liberal gals may feel they’re setting high standards for potential male companions. But sadly, they’re playing right into the hands of a system that hurts women.

An Abundance of Sleazy Guys

Pro-choicers frame the pro-life debate as conservative men forcing women to stay pregnant. That’s hardly the case. For instance, they should consider the millions of women who are vocal leaders in the pro-life movement.

Why would a man like Hugh Hefner, who built his empire on the male objectification of women, champion birth control and abortion? Because it made it easier for men like himself and his customers to enjoy consequence-free sex.

There are plenty of men out there who will be happy to play along with #Lysistrata2018. They don’t love the women they date, or plan to commit to them. They just want a hot body so they can feel good for a night or two. And then, they’re on to the next conquest.

This is a fact. Just ask any adult (and almost any teen) female. Ask women like Wright and those joining the #Lysistrata2018 movement. Ask any decent man who knows his own sex. There’s no shortage of sleazy guys.

Such men know that, thanks to abortion, they’ll never have to take responsibility for their life-creating act. (After all, that’s what sex is.) So what if the contraception fails or isn’t used? If the girl gets pregnant, she can get an abortion. That’s the assumption.

“I am all in for this plan,” one woman tweeted in response to Wright’s tweet, according to Yahoo News. “I am SO tired of men making decisions for women.”

So am I. I’m tired of men pressuring their girlfriends, mistresses and one-night-stands to have abortions. And this happens more than the “empowered” women on the left would like to think.

As I shared in a recent article, I’m expecting my first baby soon. When I discovered I was pregnant, I joined an online forum of other pregnant moms from around the nation who are due the same month as me. In those early weeks, I was shocked at an extremely common post in the forum.

Despite leftist claims, the world of abortion is not one of empowerment for women. It’s a world in which men are rewarded for using women.

It usually went something like this: I just found out I’m pregnant. My boyfriend says he’ll break up with me if I don’t abort. I really want to keep the baby, but I’m afraid of losing him. What do I do?

Thankfully, many women would respond that the boyfriend was the one who needed to go — not the baby. And many times, there were comments from women who’d been in the same position. I aborted a previous pregnancy because of pressure from the father. I wish I hadn’t. Don’t do it.

In one particularly heartbreaking post, a woman shared how the baby’s father repeatedly pressured her to abort against her will. It escalated when he threatened to push her down the stairs to kill the unborn child. I pray she got out of that abusive relationship. And I pray for other women in similar situations — because I know she isn’t alone.

The Reality of Abortion

This is the reality abortion creates. It breeds selfish men who think they’re absolved of their responsibilities when it comes to creating another human being. If the woman refuses to abort, often, such men walk away. The result? Children suffer. No amount of financial support from biological fathers can replace their presence.

It’s not all men’s fault. There are stories of men who were heartbroken when their girlfriends aborted. And many women, like Wright, have been brainwashed to believe abortion is necessary for women’s freedom.

But despite “pro-choice” claims, the world of abortion is not one of empowerment for women. It’s a world in which men are rewarded for using women. It’s a world where both men and women are discouraged from making responsible decisions. Where women are trained not to expect men they date to treat them with true respect or commitment. Where women are left to pick up the pieces after men fulfill their lustful desires.

It’s a world where bad men win — at least in the short run — and women and children lose.

Wright and her comrades may think they’re sticking it to the patriarchy with their #Lysistrata2018 movement. The sad truth is, all too many men will be more than happy to participate.

Of Course It’s About Abortion!

Overturning Roe v. Wade is a Major Step. But Changing Hearts Is the Endgame