The Stream's Jay Richards faced off with the editor of Jacobin to answer the question: ‘Is It Time To Try Socialism?’ Richards tells The Stream why he cares about this question. 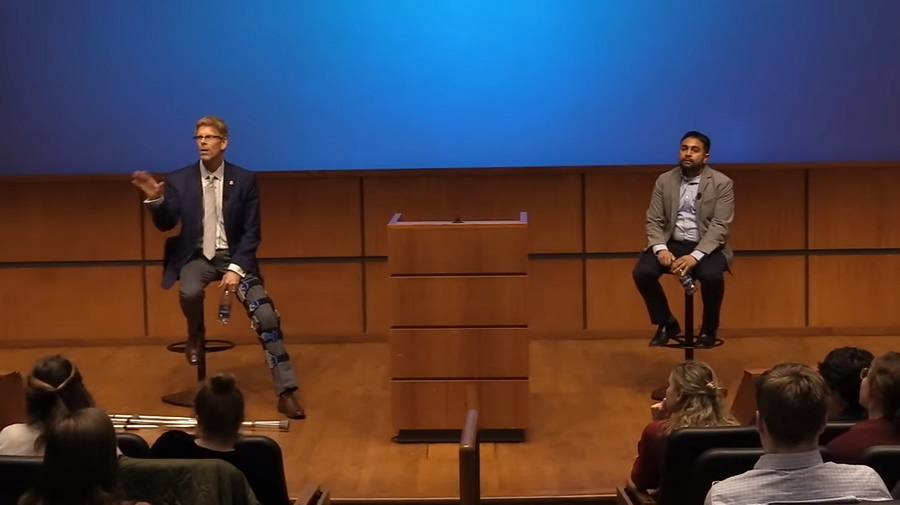 Update: 8:30 p.m. EST The debate concluded. Jay Richards argued that just because socialism seems to work in a small country like Norway, which has vast resources and a small homogeneous population, doesn’t mean it will work in large countries. There it has failed. Stream publisher James Robison called Jay’s explanation fabulous. “I pray everybody will watch and listen to Jay’s comments.”

The theme of the debate was, “Is It Time to Try Socialism?” Two editors, one a free-marketer and the other a socialist, weighed in on a question dealing with the future of freedom in America. Jay debated Bhaskar Sunkara, editor and publisher of pro-socialist Jacobin. The Stream, of course, is pro-free enterprise.

The debate took place at the University of Notre Dame.

You can watch the full debate right here:

Before the debate, Dr. Richards answered a few questions for The Stream on why he cares about this question, and why it’s relevant now:

What sparked your interest in researching socialism and capitalism?

It was my own search for answers as a college student. My freshman year, I read The Communist Manifesto, and fancied myself a socialist for a while. But I kept reading, and eventually found thinkers such as Thomas Sowell, Michael Novak, and George Gilder. The result was that my economic views changed 180 degrees over the course of several years. I eventually concluded that “capitalism,” or what I prefer to call free enterprise, is a vastly superior option, on both economic and moral grounds.

For a while, I didn’t pursue the question, though. I thought the debate was settled when the Soviet Union collapsed. But in the late 1990s, I began to discover that college students, including students at Christian colleges and seminaries, were still buying the same (bad) socialist arguments I had once believed. So, in a sense, I got into this debate out of frustration. Bad ideas don’t disappear. That just hide underground and wait for an opportune moment to re-emerge.

Why is socialism a topic you write and speak about?

Socialism has a pleasing sound that appeals to folks’ untutored moral intuitions. But its results could not be more different than its promises. Since socialism can lead good people to support wicked and deadly political policies, it’s not a topic I can avoid in good conscience.

Is it time to try socialism? Why not?

No. There was never a good time to try socialism. Sure, a dreamer could be forgiven 150 years ago for not fully grasping what it would look like in real life. But the 20th century gave us dozens of good, hard, examples of what socialism does to countries, families, and people. Given what we now know, it’s an even worse time to try socialism.

What will you seek to prove in this debate?

My main points will be that socialism fails the test of our historical and economic knowledge, that it contradicts human rights and Christian morality, and that its defenders always want to talk about their fantasy visions of socialism rather than socialism as it has existed in the actual world.

What can people expect from this debate?

People can expect to see serious arguments on both sides of the debate. This isn’t going to be a shouting match like you might see on Fox News or MSNBC. It will be a rational back-and-forth at a university that takes ideas seriously, not a carnival spectacle. We’ll be debating ideas, not personalities.

What kind of interaction are you expecting from your opponent, Bhaskar Sunkara?

I’ve met Sunkara once, and he strikes me as decent fellow. He’s also quite articulate and persuasive. I expect him to offer the best case one can give for socialism, much better than the case offered by some, ahem, current politicians.

Anyone who understands what is at stake, who cares about liberty, virtue and the American Experiment, and who wants to know how best to organize an economy so that people can flourish.

Why is socialism a relevant topic now?

It’s largely because it has grown so much in popularity. Socialism has never been popular, at least by name, in American history. But continual left wing propaganda from so much of the media and education establishments has led younger Americans, who rarely know what the word “socialism” even means, to embrace it. A recent poll suggested a majority of twenty somethings would like to live in a socialist society. My one-word argument? Venezuela.

Will the live stream video of the debate (or another form of recording) be available after the event is over?

Yes, it will be live-streamed, and will be archived on YouTube afterwards.

Anything else Stream readers should know?

I hope readers will watch the debate, and pray that the truth, no matter who speaks it, will come through clearly.