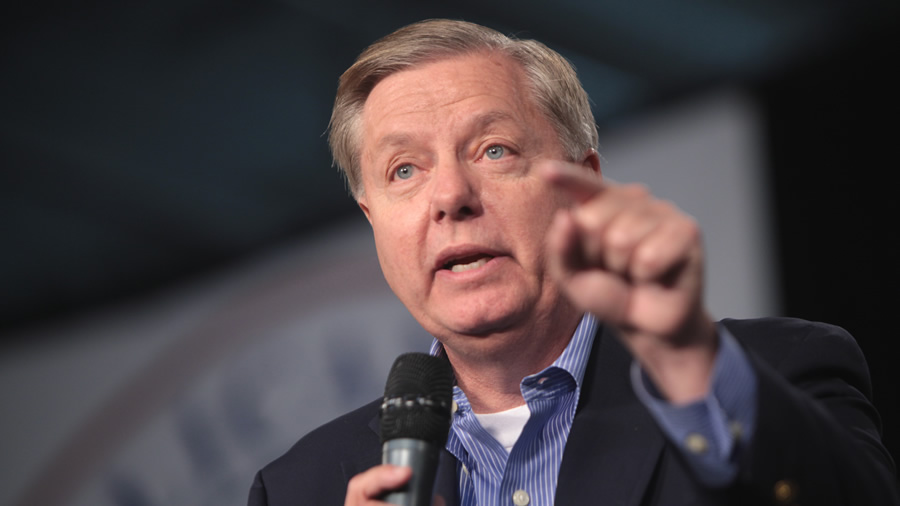 Last night Senators Lindsey Graham and Senator Chris van Hollen met with Syrian Democratic Forces (SDF) representative Ilham Ahmed. They agreed on a plan that would solve the Syria crisis without handing its valuable oil or helpless religious minorities over to ISIS, al Qaeda, or other Turkish-backed jihadi groups. Their plan would also resolve the foreign policy crisis in which President Trump finds himself.

The plan is clear and straightforward. First, a de facto no-fly zone above North-East Syria. That stops the Turks’ bombing civilians to clear out the region for ethnic cleansing. Next, an international force arrives and supervises NE Syria as a demilitarized zone. Instead of letting Turkey seize the region and drive out its people.

Last night Secretary of State Mike Pompeo made a statement that must have given Turkey pause. Asked about the crisis, Pompeo said that Trump is “fully prepared” to take military action in Syria if needed. Was that a signal that Trump is behind the Graham plan? The world should hope so.

So should Trump’s friends and supporters. The heart of his electoral base, evangelical Christians, vocally opposes the shock pullout from Syria that permitted Turkish attacks. This plan would ease the impact of that pullout on local Christians and U.S. allies. It would also secure key American interests in the region, at little risk to U.S. personnel.

President Trump has made it very clear that the U.S. Army will not leave all of Syria. It will stay in Eastern Syria “to protect the oil” (as the President clarified). U.S. forces will also keep Iran from moving into the region, and will guard ISIS prisoners. Both of those are crucial U.S. objectives.

The heart of Trump’s electoral base, evangelical Christians, vocally opposes the shock pullout from Syria that permitted Turkish attacks. Graham’s plan would ease the impact of that pullout on local Christians and U.S. allies. It would also secure key American interests in the region, at little risk.

The U.S. Still Needs the SDF

But America can’t achieve them alone. It still needs the SDF, as the Pentagon has admitted. There is only one problem here. The SDF can’t help the U.S. in Eastern Syria while its base and population centers in North-East Syria are getting destroyed by the Turks. So the people of North-East Syria need protection, or the U.S. will have to go it alone in Eastern Syria. And likely fail there.

The U.S. can’t accomplish its goals without any allies. And those ranks are thinning. The U.S. Army had planned to move the forces that had guarded NE Syria into Iraq, to watch over ISIS. But the Iraqi Army has said no. It will not admit the Americans. So Eastern Syria is the last American option. To stay there, it needs the SDF. But the SDF needs protection against the Turks and their al Qaeda allies.

So President Trump suddenly simply needs the Graham Plan. It would at once accomplish several key U.S. objectives:

More good news comes in from Europe. Last night the German Minister of defense and leader of the governing CDU party, Minister Annegret Kramp-Karrenbauer, spoke up. And called for a plan identical with Graham’s. As I predicted here at The Stream, this time the Europeans will be on board in helping the U.S. stop Turkish aggression.

Even the Kremlin has stated that it might be interested in taking part in Graham’s plan. Putin knows that the situation in North-East Syria remains very fragile. Russian and Syrian regime forces in the region are relatively weak. They don’t want a solo confrontation with Turkey, but might help with a coalition effort.

Christians Should Rally to This Plan

It seems that Graham has found the sweet spot: a plan that will help Trump politically, keep ISIS down, keep Iran out, and protect civilians from genocide. The Trump Administration seems to have lost patience with Turkey’s broken promises. European governments will commit forces to stop ethnic cleansing. And America’s allies against ISIS, the SDF, are on board with the plan, as long as it halts the Turkish land-grab.

American Christians must get behind this plan. Vocally. Let the president know it’s a prudent compromise that puts America first, without abandoning allies or Trump’s own promise to promote religious freedom. This is the moment for unity among Christians across both church and national boundaries, in support of vulnerable people and opposition to genocide.