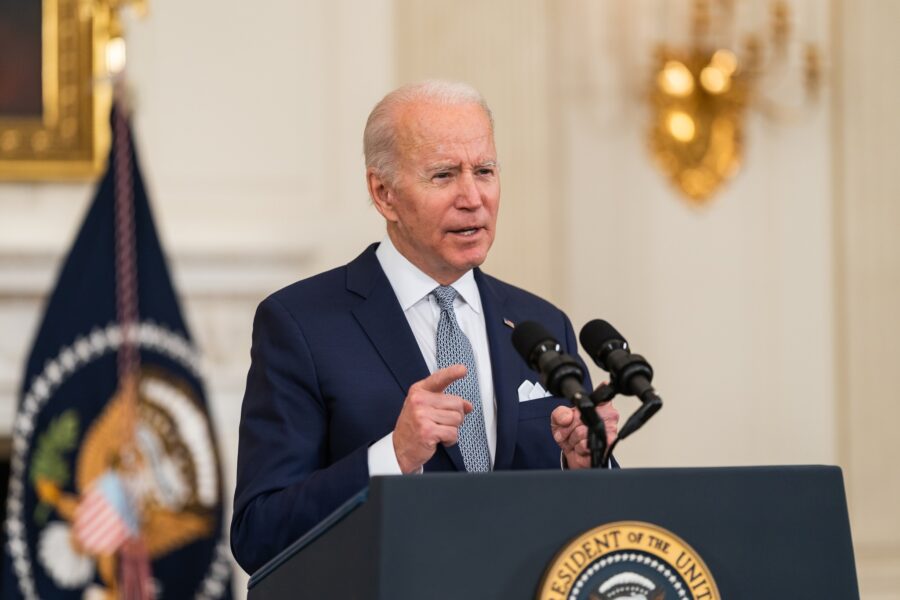 What’s harder to understand: Bob Dylan singing with a bad head cold or Joe Biden talking at a press conference? From his Wednesday presser through Thursday morning, we’ve been getting corrections and clarifications from the White House and “best I can tell, what he was trying to say was … ” from all the pundits.

It was that much a mess, even with warm-and-fuzzy pre-picked reporters and questions that dodged many of the damning topics of Biden’s first year, like crime and the border invasion.

“What are Republicans for? What are they for? Name me one thing they’re for.” After listening to him ramble, jumble and do the creepy whisper thing for two hours I can name one thing they are for: “The 25th Amendment.”

White House Press Secretary Jen Psaki must feel like the poor soul at the circus who has to follow the elephants around with a shovel. Oh, messes she has to clean up. Biden gave her two huge ones.

What? He Just Signaled to Putin It’s Okay for a “Minor Incursion” Into Ukraine?

Sure, it’d be nice if Biden focused on the 2 million illegal immigrants pouring into our country last year rather than a few thousand Russians crossing the border with Ukraine, but still, you don’t go around giving the green light to a Russian invasion.

Biden seemed to do that. Here’s the quote that put pep in Putin’s step and scared the daylights out of Ukraine: “Russia will be held accountable if it invades. It depends on what it does. It’s one thing if it’s a minor incursion and we end up having to fight about what to do and not do, etc. But if they actually do what they’re capable of doing … it’s gonna be a disaster for Russia…”

Biden also said he thinks Putin will invade. He also suggested Ukraine won’t be joining NATO any time soon. So what’s Putin’s conclusion? “The U.S. and NATO will stay out of it, if I move in a limited way on Ukraine. And given that I’m ‘capable’ of nuking Ukraine, ‘minor incursion’ is akin to ‘mostly peaceful protests.'”

That may well be the U.S. strategy. But you don’t advertise that.

Psaki immediately sent out a statement, reading in part, “President Biden has been clear with the Russian President: If any Russian military forces move across the Ukrainian border, that’s a renewed invasion, and it will be met with a swift, severe, and united response from the United States and our Allies.” In other words, there’s no such thing as a “minor incursion.” Precisely 180 degrees different from what the Commander-in-Chief said.

Their other clever bit of spin came from National Security Council spokesperson Emily Horne. She jumped on Twitter saying Biden was merely distinguishing between “military and non-military/para-military/cyber action by the Russians.”

.@POTUS clarified this. He was referring to the difference between military and non-military/para-military/cyber action by the Russians. Such actions would be met by a reciprocal response, in coordination with Allies and partners. https://t.co/vBX7aO5B1d

Is anybody keeping count of the number of U.S. allies Biden has ticked off in just one year?

By the way. Trump was impeached over the (false) allegation he put Ukraine in danger by withholding defensive aid. How then is Biden not impeached for telling Ukraine’s enemy, “It’s okay if you invade as long as it’s a ‘minor incursion'”?

Biden Questions the Legitimacy of 2022 Election … Twice. No, He Didn’t Claims Jen Psaki.

Twice during his press conference Joe Biden questioned the legitimacy of American elections if his voting rights legislation doesn’t pass. He’d said in the past they wouldn’t be legitimate without the bill.

Asked if the upcoming election will be fair and legitimate if voting rights legislation doesn’t pass, Biden said: “It all depends on whether or not we’re able to make the case to the American people that some of this is being set up to try to alter the outcome of the election.”

Funny. I thought questioning the legitimacy of American elections was seditious.

Asked later to clarify (given that Biden’s spent the past year saying that questioning the legitimacy of American elections was seditious), Biden doubled down.

"I think it would easily be illegitimate," Biden says when asked to clarify his view on whether election could be viewed as illegitimate

"The increase in the prospect of being illegitimate is in proportion to not being able to get these reforms passed."

President Biden just referred to Republicans undermining the "legitimacy" of the elections and Republicans who want to "change the outcome of the election." That is precisely the "Big Lie" narrative previously denounced by Democrats. https://t.co/NQVWn2L1r9

His meaning couldn’t be clearer. The elections won’t be legitimate if my bills don’t pass.

No, no, no, says Jen Psaki in full spin mode Thursday. He meant the opposite. He meant that the 2020 election was legitimate. And 2022 won’t be, “if states do what the former president asked them to do after the election: toss out ballots and overturn results after the fact.”

Point One: Trump only wanted ballots to be audited and illegal ballots tossed and only legal, verified ballots counted. Nobody’s explained why that’s wrong.

Point Two: The states aren’t doing what Psaki’s suggesting. They’re only trying to require Voter ID, which 80% of the public wants, and to clean up voter rolls of the dead and departed, and stop the procedures Democratic Secretaries of State put in place using COVID as an excuse that made ballot harvesting and other forms of election fraud easier. And the courts have upheld those new laws.

And Point Three: That’s not what Biden said. As if to emphasize what he meant, you need only look at his furious response when asked about his outrageous comments last week in connection with the voting rights bill.

Philip Wegmann politely asked Biden about his comments comparing those who side against him on the voting rights bill to Bull Connor, Jefferson Davis and George Wallace. Biden blew up on him. You have to watch:

Joe Biden LOSES it at @PhilipWegmann, after being asked about his previous comments calling Republicans racist. pic.twitter.com/32GBclSl8d

He screams, he insults. And most amazingly, seconds after attacking Wegmann for suggesting Biden equated his foes with Bull Connor, he again calls those who oppose him racists who will be condemned by history.

James Rosen asked why polls that show a majority of Americans question his mental acuity. “I have no idea,” said Biden.

Perhaps one reason is when Biden wasn’t being mean-spirited, nasty-tempered Joe, he was being creepy, whispering Joe.

WATCH: In a rare press conference, President Joe Biden whispers his answer to a reporter. pic.twitter.com/5yGfrqHocV

If Zuckerbucks and Big Tech didn’t create the Biden Presidency, Stephen King would have.

I’m So Great, It’s a Shame I’m Not Twins

Let’s finish at the beginning. The first question at Biden’s presser wasn’t bad:

“Inflation is up, your signature legislation stalled in Congress, voting reform is going to fail, COVID-19 is still taking the lives of 1,600 a day every day, and the nation’s divisions are still as raw as over a year ago. Did you over-promise?”

(Still, you know if it were Trump at the podium the final line would have been, “Why are you destroying America?”)

His answer? “I didn’t over promise, but I have probably outperformed.”

“Can you name one other president who has gotten as much done?” (Biden asked at one point. On behalf of our enemies? No, sir, I can’t.) Clearly a few loaves short of a bread section, Biden declared “the shelves were stocked” thanks to his policies and there hasn’t been a crisis.

In fact, overall, his first year has been a huge success, and he’s going to hit the road this year to campaign and tout all the good he’s done.

After his globe-endangering, election-damaging, reality-distorting, English torturing display Wednesday, he’ll be lucky if his Masters let him into the Rose Garden.