A Life of Sacrifice: How One Doctor Left Everything to Serve in Haiti 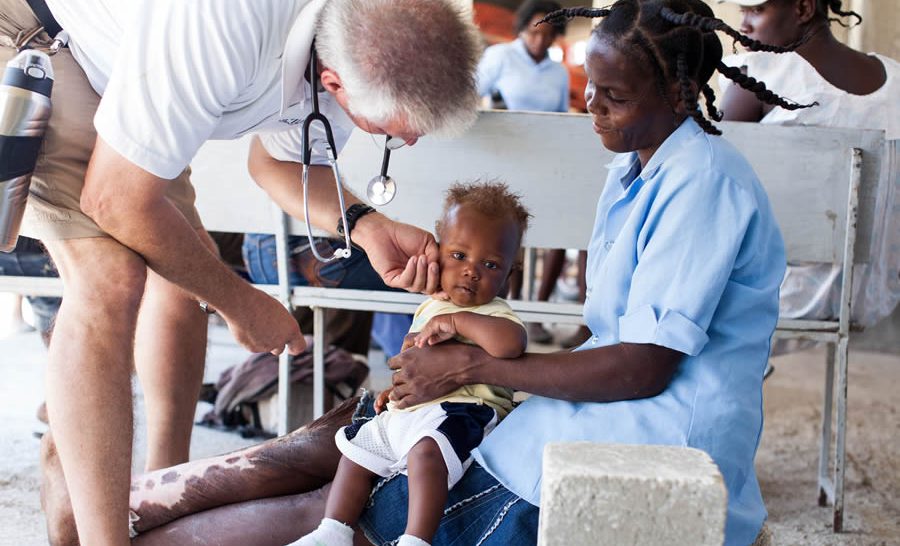 “If we’re Christians like Christ, then our life has to be a sacrifice,” said Dr. David Vanderpool in an interview with The Stream. “We weren’t living a life of sacrifice. We had air conditioning. It was great. [But] we really feel like the Lord has called us to a life of sacrifice.” Vanderpool gave up everything — including his successful medical practice, home and nice cars — to be a missionary with his wife in Haiti.

A trauma surgeon and son of a surgeon, Vanderpool was used to traveling overseas to help the poor. He watched his father take care of missionaries and determine if they needed medical treatment at home. But when he would return to the States, the difference between his wealth and their poverty was almost too much to bear.

Vanderpool, with his wife Laurie, now serve the poor in Haiti through providing food, clean water and medical care. It was what God laid on his heart from an early age. “We had always dreamed of going and doing missionary work,” he explained. The first thing they do is provide food. “If somebody’s hungry, they’re not going to listen to you preach to them. We love the statement — attributed to a lot of different people — but it says, ‘Preach all the time, use words if you have to.’ So, we go through and provide healthcare, we provide nutritional support and then clean water in areas of the greatest need.” He has seen people come to the Lord “in droves” when their physical needs are met.

A Battle for the Kingdom

Haiti, however, is not an easy place to live. Voodoo practice is prevalent there. “We really see this as a battle for the Kingdom. There’s a great scripture that I love that says that strong men have taken hold of the kingdom and are pushing it forward. And we really see that where we are.” Satan is very present and very strong in Haiti because of the Voodoo. “Unfortunately, we’ve seen his activity front and center in Haiti. The darkness of Satan is enormous.”

Practicing Voodooists have tried to curse Vanderpool and his wife. They’ve even caused them physical harm:

The Hand of God

One woman who works with Vanderpool came to Christ. A prostitute, Berlene came forward every day during chapel and weekend church services. “She’d be flat out on the concrete of the church and just bawling. And saying, ‘I’ve got to stop, I want to become a believer,’ and all this kind of stuff. And so, we’d say, ‘Berlene, it’s straightforward, here it is. Just confess and you’re good to go. It’s the way you start.’ And she’d just shake her head and say, ‘I can’t, I can’t.’ And we just thought she liked the extra money. This went on for years. She would come and say, ‘This Sunday I’m going to do it.’

One Sunday she made the decision to accept Christ. She began confessing her sins to the church, a normal custom in Haiti. Berlene’s confession was not what Vanderpool expected. As he translated for the church, his mouth fell open when he learned that she was no ordinary prostitute. She was the Voodoo cult temple prostitute, and had signed her committment in blood. She had agreed to stay on as the prostitute under threat of death. That all changed with her conversion.

Her life is completely turned around. She sits on the second row every time the church is open, singing at the top of her voice [and] has not backslidden at all, which is pretty tough considering the social pressure. Everybody knows everybody. It’s not like in the States where you might not know your neighbor. Everybody knows everybody really well. And so, for her to stop that after years, there’d be a tremendous amount of pressure on her to go back into it and she hasn’t as far as I know. So you see things like that. You know, and just the amazing transformation people undergo.

Suffering and Persecuted for Christ

Vanderpool believes that if people choose to follow Christ, wherever that leads, they will endure suffering. “[Following Jesus] isn’t very popular. I think that there are some keys to unlocking a real relationship with Jesus. And one of those is suffering. [The Bible] says that Jesus learned obedience through His suffering. And if He had to do that, why do we think we’re going to get out of this life any different?” He added that all who desire to live a godly life will suffer persecution. “Not some, not just the missionaries, not just the ‘super Christians’ — all.”

The persecution should be common to all Christians. “If we’re not being persecuted, I think it’s a good question to ask, ‘why?’ Because if you’re not doing stuff that offends Satan, you’re not going to get persecuted. If you are offending Satan, if you are messing in his stuff, if you are diminishing his power, if you are pushing his kingdom out, he’ll persecute you.” Although it may look different to each Christian, spreading the Gospel is not an option. “You need to be smart about it, but we’ve got to tell people that Jesus is Lord and He’s the only way. There’s no other way. There’s a lot of people in this world who are suffering. And we have the solution and we’re not giving it to them. As a surgeon, if I’m driving down the road and see a car crash and don’t stop, what would you think? A trauma surgeon? Of course I’m gonna stop. And we as Christians have a greater thing. We have the solution [for lost souls] and if we don’t stop and provide the solution for that, how can we do that?”

Despite the struggles and persecution, Vanderpool would do it again in a heart beat, no matter the cost. “My biggest regret is we didn’t do it earlier. You know, the thing is, we’ll die doing this. Someone’s going to kill us. That’s not paranoia. I mean, someone will kill us for doing this. And that’s okay. They’ve tried, just haven’t succeeded yet. And that’s — you think about that and that’s a win. That’s a huge, huge win.”