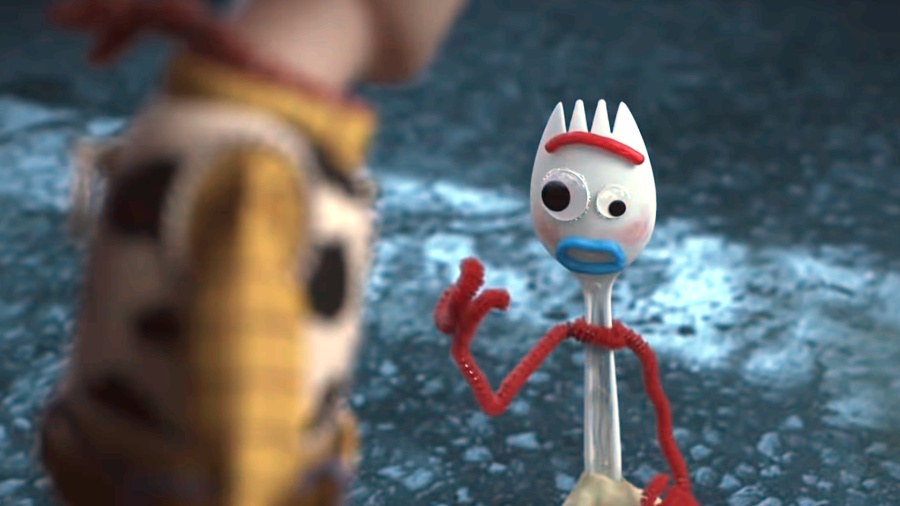 I was sitting in my hometown movie theater. It was Toy Story 4. I was expecting to laugh — even, perhaps, to cry. After all, Woody has taught us some pretty powerful lessons about friendship, loyalty, courage, and sacrifice. But I was not expecting the lesson this movie told about the very meaning of life.

The story centers around a character not-so-aptly named “Forky.” (He’s not actually a fork. He’s a spork — a plastic one). Bonnie, the little girl who owns Woody and his posse of lovable toys, created Forky with her own hands on kindergarten orientation day. She is rightly proud of her creation, having made him from scraps of craft materials scavenged from the trash after a little bully snubbed her and took all the good stuff.

So while Forky might look to others like a plastic utensil with googly eyes and pipe cleaner arms, to Bonnie he represents a huge personal triumph. In fact, Forky means so much to her that she inscribes her name on the bottom of his popsicle-stick feet.

While somewhat wistful about his own bygone days as “favorite toy,” Woody sees at once how precious Forky is to Bonnie. Forky, on the other hand, just doesn’t get it. He can’t seem to see himself as an object of value. He cannot grasp the concept of having a purpose, or of being loved. He sees himself as, well, trash.

Forky cannot grasp the concept of having a purpose, or of being loved.

For me, the funniest parts of the film were the ones in which Forky tries desperately to launch himself into the nearest wastebasket. But time and time again, Woody drags this plastic object of Bonnie’s affection out of the garbage bin and returns him to the little girl’s loving arms. After a lot of hard work and persistence, Woody eventually helps Forky to see his true value and find joy in his purpose.

The Lesson We Can Learn from a Plastic Spork

Hours after I saw the movie, it hit me: we are all Forkies.

We were created with meaning and purpose. We are each the handiwork of the Almighty, and deeply loved by Him. Our value is not determined by the sum of our physical parts, or what others may think of us. Our eyes may be different sizes and our smiles may be crooked. Our arms may be too long and our feet too big and clumsy. We vary from others in terms of talent, intelligence, and beauty. And it doesn’t matter. We are precious to the One who made us, the One who made all things.

It’s so hard for us to see this — especially when we’re young and insecure. So what do we do? We throw ourselves away. We don’t jump into garbage cans, exactly. In a hundred other ways, though, we demean and degrade ourselves. Thus we demonstrate our utter lack of understanding of our unique individual worth. You can see it everywhere.

How We Throw Ourselves Away

It’s the young man who just can’t picture himself as noble or important. He can’t see himself leaving any particular mark on the world. So he spends his time in the bins — endlessly watching trivial YouTube videos, listening to “music” with angry or irrational lyrics or even dabbling in pornography.

It’s the teenage girl who isn’t convinced that she’s smart enough or pretty enough to be loved the way she longs to be loved. So she gives in to pressures to expose her body — and her heart — to gain a bit of assurance that someone is paying attention and finding her “worthy.”

It’s the tired man who drives himself so hard at work that he has little time for friendship or hobbies and can’t fully enjoy his time with family. He’s convinced that his value comes from the size of his paycheck or the title after his name.

It’s the middle-aged woman who spends hours each day on social media. She needs to see which of her “friends” had the nicest vacation. Or whose kids are doing better than hers. Or who is sticking to the most grueling diet-and-exercise plan.

Reality is Better Than That!

We throw away precious time because we fail to see the reality of our situation. We were made by a Creator who loves and values us. He set us in a world with gratifying work to do, gave us amazing minds that can create and invent, and bodies that can experience the pleasures of taste, touch, sight and sound that he designed. Then He revealed Himself to us, and gave us an “instruction manual” for life.

Just like Forky, we will only find fulfillment when we understand and embrace our real purpose — to glorify our Creator and enjoy Him forever. It’s time to come out of the dustbin.