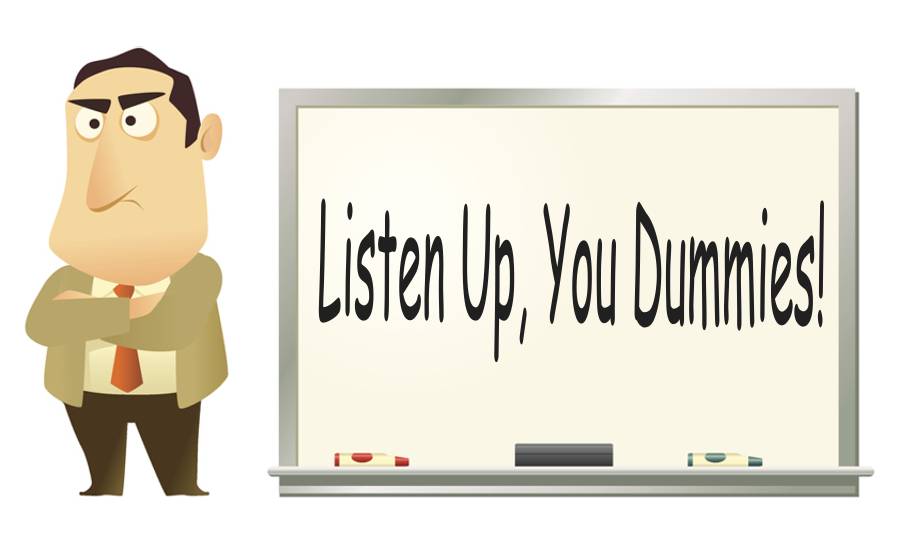 Conservatives are in hysterics over critical race theory, because we’re nasty, brutish people frantic over threats to our white supremacy, using CRT to flog the people into a frenzy, while keeping ourselves blissfully ignorant of what CRT even is.

So the narrative goes. Just ask any libsplainer. They come by the dozens.

I beg to differ, though. Actually, I’ll go ahead and differ without begging. No need to stoop to that; this is way too easy. They need to hear some ‘splainin’ of their own.

But you need to hear it from their lips.

“Shut Up, Idiots!” He Explained.

Oliver Willis, senior libsplainer for The American Independent and former research fellow at Media Matters, starts out by likening CRT “panic” (as he calls it) to Satanism hoaxes of the past. And Fox News is entirely to blame for it, with paranoid segment after paranoid segment on it.

“You would think critical race theory is everywhere,” he jeers. “It’s sleeping with your spouse, it’s why your lunch doesn’t taste good and why you forgot your grandmother’s birthday.” But no one is teaching it to anyone’s children. Because it is an “intensely academic subject.” We think it’s about “all white people” being told “ they are guilty of all racial crimes throughout American history, and that they must submit to the superiority of Blacks.”

I guess it’s pretty stupid, then. Especially since the truth of CRT is that it’s “intensely academic.” It’s about “discussions about the long-term effects and causes of systemic racism. … important and worthy of serious academic study, debate, and investigation.” Sounds so very … intelligent.

Except he’s wrong on every count. I’ve never heard any conservative misrepresenting CRT that way, in such over-the-top, inflammatory terms, as Willis says we do. Why should we? The reality is bad enough. Because CRT absolutely is not merely academic, and it never has been. It’s about upending current understandings of equality, justice, and the rule of law. It’s about revolution. I didn’t get that from Fox News, I got it from reading critical race theorists. Start here if you need your own evidence.

And yes, it’s being taught in schools, or at least educators certainly want it to be. I didn’t get that from any conservative politician either, I got it from educators. That strongly worded pro-CRT NEA resolution tells of their determination to critique “empire, white supremacy, anti-Blackness, anti-Indigeneity, racism, patriarchy, cisheteropatriarchy, capitalism, ableism, anthropocentrism, and other forms of power and oppression at the intersections of our society.” (Whew! Try saying that three times quickly.) It also tells of their opposition to any “attempts to ban critical race theory and/or The 1619 Project.”

I’ve never heard any conservative misrepresenting CRT that way, in such over-the-top, inflammatory terms.. Why should we? The reality is bad enough.

They voted it in, they published it, then poof! they made it disappear. The next time someone tells you we’re “paranoid” over CRT, ask them what kind of moral courage led the NEA to hide that resolution, leaving it accessible only from alternate sources.

Anyway, don’t you just love it when the left tells you how wrong you are? Or how you only listen to your own biased sources? I’m so glad Oliver Willis got all his facts so straight. What good is libsplainin’ without a good dose of, well, umm, let’s just call it some sort of information and keep it neutral, okay?

Scare Quotes and Everything

David Theo Goldberg does no better in his Salon libsplainer, “Meet Christopher Rufo — leader of the incoherent right-wing attack on “critical race theory’.” The title is hilarious all on its own: They put “critical race theory” in scare quotes! As if CRT weren’t real, maybe? He does it in the lede, too:

The attacks on “critical race theory” over these last nine months have sought to silence any critical focus on racism today, on structures, institutions, systems, acts and people deemed racist, and to reshape historical memory regarding race to this end.

That’s all the further Goldberg had to go to before he got his facts wrong, too. I hear it everywhere: We attack CRT because we don’t want anyone anywhere talking one word ever about race. No, actually, we attack CRT because CRT is wrong. It’s built on wrong foundations — factually and morally wrong — and it’s bent toward wrong purposes.

Still, “Make-believe is the name of the game,” ‘splains Goldberg. Example one: You’ll never find CRT in school, he tells us, only in “specialist college classes.” Oh, is that because the NEA is so dead-set against it? And you’ll never run into a woke corporation teaching white shame, or a college orientation doing the same, right?

Marxism? Where? What Marxism?

Christopher Rufo falsely flogs CRT’s “Marxist” associations, Goldberg also tells us. It makes me wonder if he’s read anything about the founders of CRT’s parent theory (via critical legal studies). It’s called critical theory, no middle word there this time, and it grew out of work by Antonio Gramsci in Italy, and the Frankfurt School in Germany and the U.S. These men (yes, all men) were entirely about Marxism. They studied it, taught it, massaged it, worried about it, wondered how to make it work better; but the “it” in there was always Marxism.

Sure, you don’t hear the name mentioned so often in CRT (Goldberg gets that part right), but Marx’s intellectual parentage is in there, just as clear as the guy on the right here is more likely a Hanks than a DeVito. Marx makes his presence fully and constantly known in CRT’s incessant emphasis on “equity” in money and power.

There’s an “obvious rejoinder” to that, ‘splains Goldberg. (Of course he does.) He says it’s “the unprovable parading as given.” Unprovable? Good gracious, how much proof does he need?

Consider the way CRT gets whitewashed as mere “analytical method.” You must realize how impossible that is. There is no such thing as “mere analysis” in human systems. Give your company’s employees a survey asking what they think about corporate communication and employee benefits, and you’re not just asking them something, you’re telling them something: That you care what those things, and you care what employees think about them. Whether that’s true or not is another thing. You’re still saying it, whether you mean to or not.

So now look at the categories CRT analyzes, the only categories. Again, it’s power and money. Those were Marx’s categories. It’s Marxist materialism, front to back, both economic and philosophical. Nothing else enters into the equation: Not virtue, not quality relationships, not moral excellence, just how much your group has got and who, er, what y’all can buy with it.

The libsplainin’ continues. He goes on to say that anti-CRT criticism lacks the “capacity to judge the truth or merit of the object of analysis.” Good grief. I can only laugh. Is he really that clueless about himself?

Well, yes, maybe. I could pull up dozens of articles like these, most of them complaining about how we conservatives only get our info from each other. They sound suspiciously like they’re getting that from each other.

Or maybe some of these libsplainers know exactly what they’re doing. In that case the question is, “What kind of idiots do they take us for?” That’s easy: They take us for ignoramuses. Not all of us, maybe; if they know what they’re up to, then they also know that a lot of us know it, too.

They’re not aiming at those who know, though. They’re gunning for others, the casual observers, people whose beliefs on CRT come from hearing about it somewhere. They’re the vulnerable ones. They see or hear a barrage like Goldberg’s or Willis’s coming at them, they don’t know how to process it as the misinformation it is, they feel the scorn, and they start believing there’s something embarrassing or stupid about taking a stance against CRT. Then they fold.

You’ve Got to Defend Yourself

I suspect that’s what it’s about. It’s not about facts, that’s clear enough. It’s about emotional manipulation. Your best defense against the barrage is in knowing enough to recognize the deceit when you see it.

That includes knowing truth about CRT’s claims and methods, as well as understanding what’s true about the world as God made it. He gave us a whole lot more to be interested in than power and money. It’s not just your best defense, though; it’s probably your kids’ only defense.

They make their side look lovely, caring, even intellectual, and ours appear ugly and stupid. It’s all words, though, emotionally driven and free of facts. It’s deceitful, manipulative, and dangerous. So this is no sarcasm, no joke: You’ve got to learn the truth, and learn it well enough to explain it. Only then the libsplainin’ will lose its appeal.