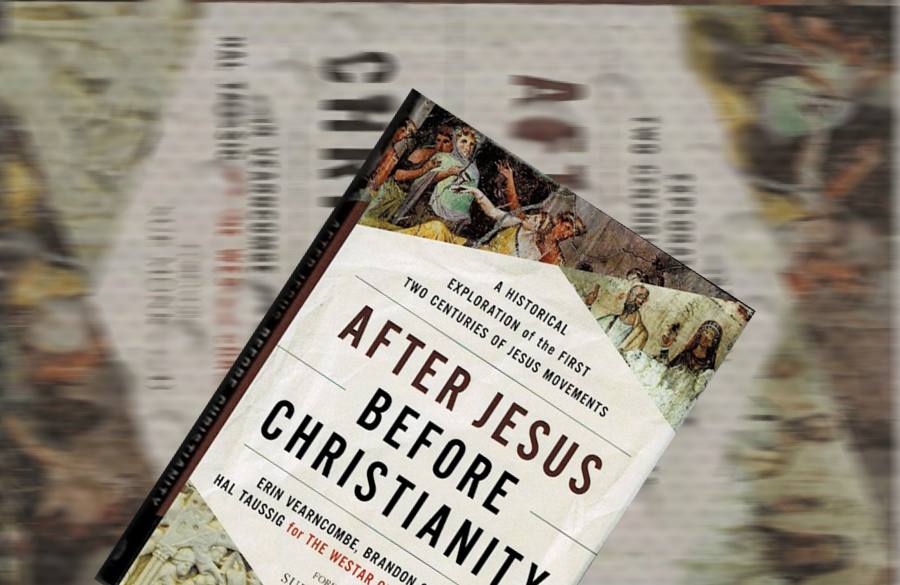 Here’s a “can-you-guess?” question for you. I’ve just finished a recent book about group of people that lived long ago and far away, and I’m going to let you guess which group that is. According to this book, this group pioneered the use of gender as a “tool” for testing boundaries and reimagining their identities. They made a practice of disrupting gender roles and ideas, especially where those ideas made heterosexuality the norm.

Ready to play? Who do you think they’re talking about?

It’s the early church. That’s right, folks! According to the book After Jesus, Before Christianity, written by a team from the Westar Institute (home of the infamous “Jesus Seminar”), this is who the first Christians were. Except the authors don’t think either “church” or “Christians” are the right labels. Call them “Jesus club members” instead.

I’ll guarantee you’ve never read your New Testament that way, and if you’ve read church history, you never found this there, either. These authors say that’s because everyone else writing church history has been doing it wrong, reading the past in today’s terms. I say it’s because these authors are suffering a touch of insanity.

I read the book by agreement with the publisher, who sent it to me for review. (This isn’t going to be the review they were hoping for.) The word “insane” has specific legal meanings, one of which has to do with not understanding there’s something wrong with the crime one is committing. This is a lot like that. Not the real thing, but definitely a touch of it.

I’ll explain why I say that, then I’ll show why it matters to you and me.

And Jesus Said, ‘Let the Gender-Creative Celibate Men Come Unto Me’ ?!

The first step is showing they did wrong. We won’t find criminal harm here, of course, but if historians tearing historical truth into shreds is wrong, then they did wrong.

Exhibit A: They say, “A wide range of Jesus peoples practiced gender bending — that is, gender roles were fluid and flexible. One of their primary identities was that they were neither male nor female.”

I don’t know where they got that from. If it was in writings of the early church, they don’t say so. They don’t reveal where most of their conclusions come from. Paul did say something like that in Galatians, but his point there is so far from this, you couldn’t find it with the Hubble Telescope. Paul was saying that Christ accepts all persons equally. Read Galatians 2:20 (keeping it in the same letter of Paul’s): A believer’s primary identity is in Jesus Christ.

You’d think they’d at least show a little academic responsibility while spewing nauseating blasphemy like that.

Exhibit B: The early Jesus clubs were made up of disparate, loosely connected groups, they say, and the Gospel of Matthew mentions one of them: “a particular group of celibate men that it names ‘the Children’ (18:2-7; 19:10-15).”

Yes, you read that right. The passages there have Jesus saying, “Let the little children come unto me,” and the like; but that was code language. Jesus was really talking about celibate men who practiced “gender creativity,” as they say elsewhere in the book. Again, no information on how they came up with that. They treat it like, “Everyone knows it, no one could object to it, so why say more?” You’d think they’d at least show a little academic responsibility while spewing nauseating blasphemy like that.

Martyrdom Was About Disrupting Gender Norms?!

Exhibit C: “A wide swath of Jesus groups rejected marriage and the traditional family, with the envoy Paul leading the way.” Really? What about Matthew 19:1-4, and Ephesians 5:22-64 (among other passages)?

Our authors would tell you all that was written later, yet even if that fiction were true, how would these supposed “wide swaths of Jesus groups” have permitted those passages to be added into their “invented” scripture that way? It makes no sense.

Exhibit D: Our authors note that many early martyrs’ bodies are depicted as old, sick, frail, or female. Here’s why: Under Greek and Roman gender norms, martyrdom had to do with masculine strength and courage, but “Jesus club” people wanted to disrupt those gender norms.

That’s just crazy. For one thing, what is this business about martyrs‘ bodies? I’m afraid — Heaven help us all! — I’m afraid their answer would be, “We know about their bodies, but we don’t know what gender they identified as.”  But there’s a far simpler explanation for why the stories tell it that way: Because it happened that way. One thing Jesus does for people is to give great courage through faith, so no wonder there are more old people and women here than in other martyrdom stories.

Not Reading the Present Into the Past?!

I could go on for pages, but no need. This isn’t just wrong, it’s outrageously wrong. That by itself doesn’t move it toward “insane”. The rest comes out of their claim that they’re not reading church history through the lenses of later thinking. Seriously. They say they reject the “master narrative” and “previous assumptions” that most church historians follow, adding,

Reasonable, solid construction starts with foundations. Our experiment is one of foundations, and only of foundations. So if we do not assume we know the future, what can we reconstruct about the lived experience of diverse peoples across the ancient Mediterranean?… What happens when we approach the first two centuries forward, rather than backwards? What happens if we start at the very beginning and see what happens from there … with minds open to an unknown, unassumed future?

I read that as saying, “We’re not going to impose later biases on the first two centuries’ experience. So all this “gender” and “heterosexuality” and “family experimentation” stuff? That’s not bias! It’s not reading the 21st century into the first and second centuries, it’s just seeing things the way they were!

To be honest, their claim is more specific than that. They say they’re not reading today’s Christianity back into yesterday’s stories. At least they’re right about that! I don’t recognize any Christianity of any era in there; none except for 21st century queer Christianity.

And I do mean “queer.” Here’s the actual text from which I took part of my opening paragraph here: The authors say, “Much of this [first- and second-century boundary-testing is best understood as a queering of ancient structures of gender.” And they approve of it wholeheartedly, for example, “Queering opens possibilities for new modes of identity and belonging.”

This book is drenched and dripping with queer. And they think they’re not reading the present into the past?

This book is drenched and dripping with “queer.” And they think they’re not reading the present into the past? It’s not criminal insanity, but it’s sure got something in common with it. Add to that the casual way they handle the most outrageous blasphemies — as if no one could doubt it, and no one could disagree — and you’ve got a case for them being seriously, maybe even pathologically out of touch with human reality. (They’re dangerously out of touch with divine reality.)

You may ask, “So what? It’s another batch of obscure academics gone crazy. What else is new? Why does this matter to you and me?”

First, we can’t assume this sort of thing will remain invisible and unheard from. This group is with the Westar Institute where a previous group, the Jesus Seminar, had an amazing public relations machine pumping its results — even though they were almost as laughable as these.

Second, this kind of thing gets airplay in universities, where your kids and our country’s future leaders absorb it from the air, like trees absorb carbon dioxide.

Finally, work like this has a tendency to “leak” unfiltered into the public mind, People absorb it from the cultural air, as it were, not knowing where it came from or how mad it is.

Does it make you angry? Why shouldn’t it? Your anger is a sign of your sanity.

This madness matters. So what should we do? We can take a lesson from the way our justice system handles actual insanity. When a murderer is pronounced insane, the courts don’t say, “He’s not responsible, so just let him go.” They confine him for a period of treatment, both for his own correction and for others protection, in case he might cause further harm.

Pray for the authors. God can still correct them. In the meantime, we can confine books like this one, too, in a figurative sense, limiting their effect by calling them out for what they are: Rot. Garbage. Crazy. With a touch of insanity, even.

Natasha Crain Can Help You Be Faithfully Different