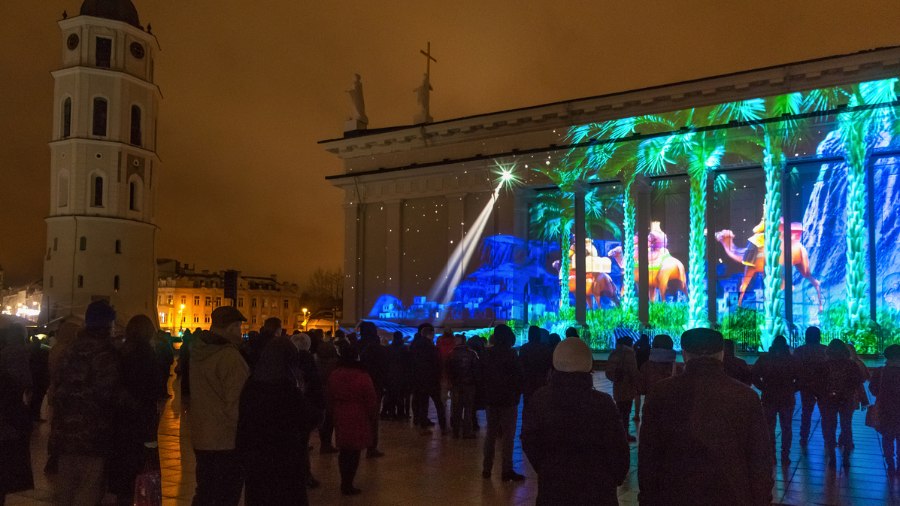 A nativity scene featuring the star of Bethlehem illuminates the Cathedral Basilica of St. Stanislaus and St. Ladislaus in Vilnius, Lithuania, Dec. 26, 2018.

By Guillermo Gonzalez Published on December 18, 2020 •

This year a close conjunction between Jupiter and Saturn marks the start of the winter solstice, only four days before Christmas. Although Jupiter and Saturn have a conjunction every 20 years, this one is the closest observable one since 1226. At their closest, visible to observers in Europe, the planets will appear about 1/5 of the moon’s diameter apart. For observers in the continental U.S., they will appear slightly farther apart.

This conjunction makes for two interesting visual effects. First, on the evening of December 21 observers with below average visual acuity will see the pair of planets as one bright star low in the southwest. If you have good eyesight, you should be able to see them as separate points of light. If you follow them for several evenings before and after the conjunction you can watch as they approach each other, “merge,” and then separate. It is during rare close conjunctions like these that the motions of the planets in the sky are most evident.

Second, viewed through a small telescope at low power, the planets can be seen simultaneously with their disks resolved. With a telescope there is a tradeoff between magnification and field-of-view; the higher the magnification, the smaller the field-of-view. It is rare for these two planets to be close enough in the sky to fit them within the same field-of-view and also see details such as the bands on Jupiter and the rings around Saturn.

Connection to the Star of Bethlehem

This time of year reminds us of the birth of Christ and the star that signaled His birth. Scholars still debate the nature of the “star,” if it can indeed be explained astronomically and not simply supernaturally. Some say it was a comet, while others think a planetary conjunction is a better explanation. The extremely close conjunction between Jupiter and Venus on June 17, 2 B.C. is a leading contender.

On that night these two planets came within one-hundredth of a degree of each other. Even to the best observers they would have appeared as one star, indeed the brightest “star” ever seen, apart from novae and supernovae. A conjunction with similar circumstances occurred on August 27, 2016, which some commentators connected with the Star of Bethlehem.

As you enjoy this celestial planetary dance, let it be a reminder of the promised savior another celestial event signaled 2000 years ago, even if it wasn’t a planetary conjunction.

Guillermo Gonzalez is an astronomer and co-author of the second edition of Observational Astronomy, a widely used undergraduate textbook. He is also co-author, with Jay W. Richards, of The Privileged Planet: How our Place in the Cosmos is Designed for Discovery.