Lessons From a Third Grade Dropout: What One Man Learned That Has Stayed With Him for a Lifetime 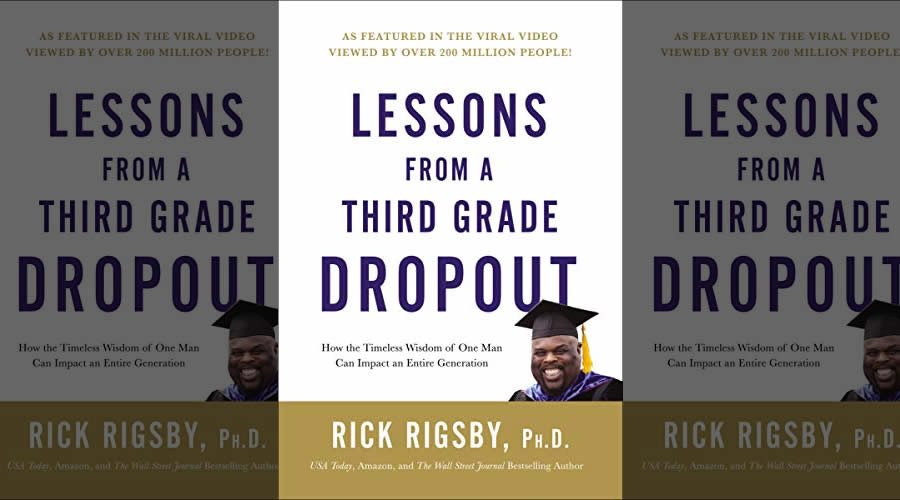 On Tuesday, October 1, 2019, LIFE Today will host Dr. Rick Rigsby to discuss his book Lessons From A Third Grade Dropout. Recently, The Stream’s Nancy Flory sat down with Rick to talk about his book and get his perspective on teaching the lessons he learned to today’s kids.

He was a pastor and people kept telling him they were thinking about suicide. “My first thought was something my father would never do, and that would be to judge them. To judge the quality of their mind. I’d think, ‘Boy, what a weak-minded person.’”

Then he had an experience that changed his mind. He lost his wife. “Go up to a casket of [your] wife and you will go right down that same road.”

Rick’s wife died of breast cancer in the 1990s. His father stood beside him at the casket. “Son, just stand,” his father told him. Rick explained that his father meant. “What he was saying was, you stand on the promises of God. You stand on what you know to be true.”

That was one of many lessons his father taught him. With only a third-grade education, Rick’s father was “the smartest man I ever met.” Roger Rigsby also taught his son how to be kind to others, help them, respect their time and live a life of integrity. Now Rick is teaching his sons the lessons he learned from his father.

“My dad … rose to the challenge. His lessons continue. To this very day, they’re embodied in me and my brother and in our children, the grandchildren. I see my father’s kindness in my oldest grandson.”

Rick’s book Lessons From a Third Grade Dropout started out as a curriculum at Texas A&M, where Rick worked at the time. Coach R.C. Slocum had asked Rick to find a curriculum that would teach life skills to the football team. After looking for curriculum and talking to other schools, Rick went back to Slocum. “I said, ‘Coach, I think I know what you are looking for. You’re looking for basic lessons that drive positive behavior. Let me tell you about the wisest man I ever knew in my life. A third-grade dropout.'” The coach responded,  “That’s it.” In 2006 Thomas Nelson Publishing published the book that came from Rick’s curriculum. The book had some success from 2006 to 2012. Then, in 2017, Rick gave a graduation speech on the lessons he learned from his father. There was an “overnight explosion,” said Rick. The video went viral and the book became a best seller. Harper Collin has just re-released it.

“I just have a word of encouragement to people that have planted seeds where they haven’t seen the fruit,” said Rick. “Just wait. It’s not ‘Will an opportunity come?’ but ‘Will I be ready when the opportunity comes?'”

Rick has advice for parents today. “There will be plenty of time to be your kids’ pal. Plenty of time. But during those formative years, love them unconditionally, help them understand the consequences of actions, and make sure you plant in them core values … that they will be great people who do great things.”