Lepanto: The Most Important Battle No One Knows 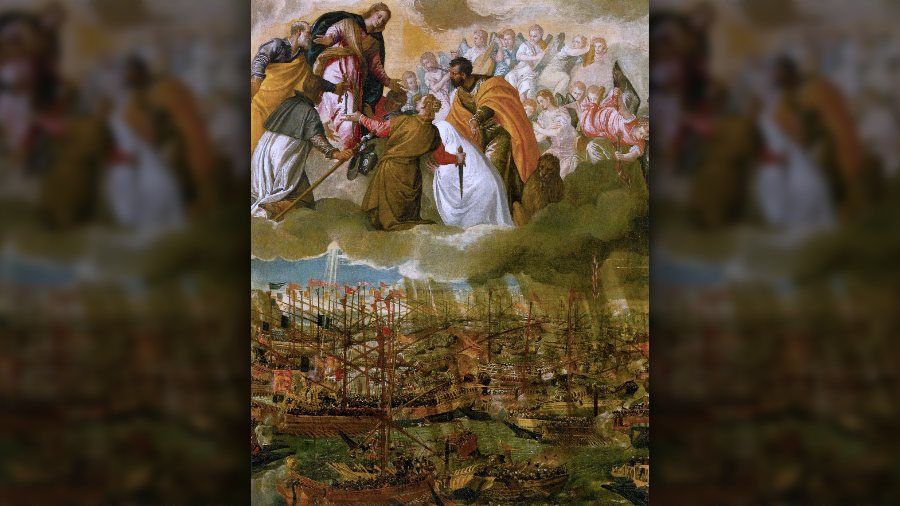 "Allegory of the Battle of Lepanto" by Paolo Veronese.

When you think of turning points in history, what comes to mind? Revolutions? Natural disasters? Plagues? Assassinations? Military conflicts, however, have probably been the most influential type of event, even if liberal academia has decided it “ain’t gonna study war no more.” But despite the lack of emphasis on warfare by educators, some important battles are known to the public. At least ones in American history. Bunker Hill. Gettysburg. Pearl Harbor. Not a lot of ones from earlier centuries strike a chord, alas. The Milvian Bridge. Tours. The Horns of Hattin.

I’d be willing to bet practically no one today knows what happened on October 7, 1571.

Lepanto — Erased from the Collective Consciousness?

On this date, 450 years ago, the combined naval forces of Europe’s Catholic states, the “Holy League,” saved Western civilization. The Ottoman Empire, which ruled not just the Middle East but large chunks of eastern Europe, wanted more territory and to extinguish the annoying Christian opposition from central and western Europe. To do so, Sultan Selim II sent a huge naval force to conquer Rome and capture or kill the Pope. Nearly 300 Ottoman warships headed west, from Turkish-ruled Greece.

The Ottomans had been on the offensive for two centuries. But it had mostly been by land. Since taking Constantinople, and finally wiping out the Byzantine Empire, in 1453. Serbia. Hungary. Crete. All fell before the Islamic Empire and its feared janissaries. Although the threat of Islam in the west had been quelled by the Reconquista, it seemed that Muhammad’s followers might well win coming from the opposite compass point.

The Ottomans were never quite the equal of the Europeans as mariners, but they had fashioned a formidable navy to go along with their powerful infantry and cavalry.

Europe was wracked at this time by the Reformation, which no doubt contributed to the Ottoman sense that they could win over a religiously-divided Europe.

Despite that handicap, the main Catholic powers — Spain and Venice, as well as the Papal states and others — negotiated a response to this latest Ottoman thrust. They parried with a huge naval force of their own, of 200 ships. Both sides used types of galleys. These were ships with both sails and oars — very much like those employed in Roman and Greek times. However, the Catholic and Muslim navies had two major differences. The latter used slaves as oarsmen, not free men. And the former had developed a larger type of galley, a galleass. While these comprised only a few of the Western naval force, they were instrumental in victory. As converted merchant ships, they carried 28 naval artillery guns each. This firepower would prove devastating to the Ottomans’ numerous, but smaller, ships.

Both sides also had infantry on their ships. But whereas the Turks were armed with bows, the Spanish soldiers in particular had arquebuses. These were slower to fire, as gunpowder weapons. But they had much greater penetrating power.

Besides weaponry, the Catholic forces had two other mundane advantages. First was leadership. The overall commander for the European side was Don Juan, an illegitimate son of Emperor Charles V. Something of a compromise choice for admiral, his leadership during the battle proved invaluable. He held together a squabbling coalition. He lobbied successfully for a frontal assault on the Ottomans. He took his own flagship into the thick of the battle. And during the battle he moved the Catholic naval forces to where they could do the most damage. For good reason Don Juan was considered the main hero of this momentous battle.

In addition, the Christians had the upper hand psychologically. When the Turks had attacked Cyprus, their commander, Lala Mustapha, had promised the Christian defenders of Famagusta safe passage should they surrender. But when they did, he enslaved them and killed their commander — by torturing him, then flaying him alive. If this was intended to cow the rest of Europe, it did just the opposite. “They were furious, and that fury drove them into the Holy League with all the strength of their wrath” (T.C.F. Hopkins, Confrontation at Lepanto).

When the battle ended, the Ottomans had lost over 100 ships, and tens of thousands of men. The Holy League suffered only 17 ships sunk, and less than half the Turkish casualties. One doesn’t have to be Catholic to see an element of divine intervention in the Battle of Lepanto. Although prayer always seems to work better when coupled with superior weapons, tactics, and leadership. It’s a pity that this crucial battle is so little-taught today. The Ottomans were not done attacking Europe on land — they would besiege Vienna twice in the 17th century — but their myth of invulnerability was long gone after Lepanto.

“Lepanto slipped away beneath the waves and into the imagination of those who were not there, making it perfect fuel for myth. Yet myth does not rob it of its importance … . Whatever else it was or was not, this may describe it best: La mayor jornada que víeron los siglos — the greatest day’s work we have seen done in centuries — Miguel Cervantes wrote, and it is hard to argue with him: he was there” (Hopkins, p. 198).