The Left Relies on Bad Stage Magic: Misdirection and Sleight of Hand 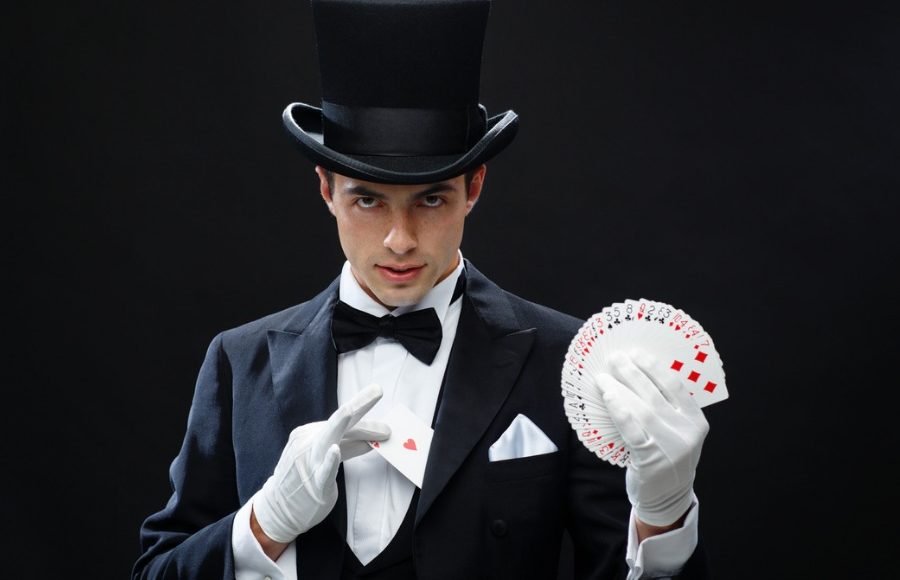 One of my favorite TV shows is The Carbonaro Effect. On it, the talented magician and performer Michael Carbonaro hides in plain sight. He works as a bartender, grocery clerk, or office manager. Then he plays elaborate pranks on unsuspecting citizens. Their guards are down. His tricks are seamless. And the “magic” usually happens. Sometimes he’ll transform raw kernels of corn instantly into tortilla chips. Or pour from a bottle of beer that never empties, filling a dozen pints. My favorite trick? Where he found a “cursed chalice” in a ruined church that terrified workers by turning their colleagues into stone.

It’s all in good fun. He always “reveals” the trick to people, and they laugh delightedly. We enjoy being fooled, when the stakes are low and the purpose is innocent.

You know what isn’t funny? When a person or organization relies on sleight of hand, misdirection or illusion to really deceive us. To take our money. Or our freedom. Or the rights of innocent people. To cover for crimes, or hide venal motives. Or to distract us from wrongdoing. Or even worse, to blame victims or whistleblowers.

It’s bad enough when we suffer such a fraud and it’s done skillfully. What’s even more painful to me? When it’s done crudely and blatantly. So that it insults our intelligence. When the “magician” is unlike the real Michael Carbonaro, but instead more like the fictional Gob (prnounced “Job”) Bluth on Arrested Development.

When a trick is so crude and obvious, observant people can spot it. Honest media would report it. For instance, when Harvey Weinstein was finally (after many years of elites’ collusion) confronted with his abuse of women. At his next press conference, he tried to “deflect” with a tactic so crude and crass, even the Hollywood left didn’t buy it. He spoke of his shame and outrage (at himself) and promised to work it out by “fighting the NRA.” Weinstein had made too many enemies, so nobody even pretended to buy this.

Of Smollett and Sandmann

But all too often sympathetic media and corrupt people in power collude in such deceptions. Remember the softball treatment Jussie Smollett got from prosecutors and reporters, after faking a vicious hate crime? Only Chicago cops (most of them black) who’d wasted countless hours when they could have been saving black kids’ lives managed to register any outrage in the media.

Media were key in manufacturing a nationwide hatefest aimed at Nick Sandmann and his fellow Covington Catholic students at the March for Life for … wearing MAGA hats, it turned out. And doing nothing more than that.

And what about the media machine that gave credence for almost two weeks to the crazy lies invented by Julie Swetnick about Brett Kavanaugh, Mark Judge, and their “teenage gang rape” ring? That was some real Gob Bluth-level conjuring there, right up to Michael Avenatti’s stint as defender of public morals and possible presidential contender. Reporters ate it up like hogs at a trough. And of course, now media are colluding to distract us from the extremist ties and bigoted statements of the “Freshman Four” leftists in Congress. Instead they’re putting white nationalist Richard Spencer on television to help impugn Donald Trump’s tweets.

The media machine gave credence for almost two weeks to the crazy lies invented by Julie Swetnick about Brett Kavanaugh, Mark Judge, and their “teenage gang rape” ring? That was some real Gob Bluth-level conjuring that went on there, right up to Michael Avenatti’s stint as defender of public morals, and possible presidential contender. Reporters ate it up like hogs at a trough.

Today, the legal system in California is colluding with biased media in the effort to destroy another innocent. Not a mere “drive-by” victim like Sandmann or Judge. Or an upright public official, like Judge Kavanaugh. No, they’re trying to bankrupt and jail a whistleblower and journalist, David Daleiden.

Remember the Planned Parenthood videos that documented how the organization sold human baby parts for profit, violating federal law? The moment those went live, the spin machine kicked into gear. Stung by the wide coverage gained by Lila Rose’s previous video stings, Planned Parenthood was ready. It hired Fusion GPS, creator of the whole fake Russian collusion story about Donald Trump. The firm produced a report claiming that “experts” had found the videos doctored and deceptively edited. From that moment on, the media could point to the product of a PR firm specializing in damage control and opposition research, and use it as pretext to treat Daleiden’s videos as fake. As The Washington Times reports:

“In reality, the report is a pseudoscientific production by Fusion GPS, a political opposition-research company that has no forensic certifications,” Mr. Daleiden said at the time.

The Center for Medical Progress retained Coalfire, a leading digital forensic analysis firm, to show that the undercover videos are “authentic and show no evidence of manipulation.”

That didn’t matter. America’s suffocatingly pro-choice reporters and editors paid no attention. It’s not that they were fooled by Planned Parenthood’s sleight of hand. They volunteered to take part in it, like magician’s assistants waving peacock feathers to help out the conjurer.

The State of California jumped on the bandwagon. Instead of investigating the crimes Daleiden uncovered, they started prosecuting him. Then-Attorney General Kamala Harris initiated the case (after consulting with Planned Parenthood, massive campaign donors of hers). Then she handed it on to her successor as she took her act to the Senate, and now to the presidential trail.

And Planned Parenthood launched a massive civil suit. As Daleiden told The Stream:

Judge Orrick founded and funded a Planned Parenthood clinic. Yet today he is still hearing their lawsuit against me and The Center for Medical Progress, in retaliation for the undercover videos that exposed Planned Parenthood’s sale of baby body parts. Even worse, this biased federal judge is now trying to put his thumbs on the scales of the bogus prosecution launched against me by Kamala Harris. He’s threatening me, CMP and my lawyers with a $195,000 fine just for trying to use the same videos in my defense that Kamala Harris’s goons are using in my prosecution. …. This GoFundMe campaign is an opportunity to stand up and fight back.

Daleiden’s case continues. His legal team at the Thomas More Society have announced that they

will ask District Judge William H. Orrick III to grant summary judgement in their favor on July 17, 2019… . The hearing will take place at 2 p.m. (Pacific)… .

This is one of several controversial abortion industry lawsuits against undercover journalist David Daleiden, the lead investigator in the video project that exposed Planned Parenthood’s reputed sale of aborted baby body parts. Included in the debate is the seven-million-dollars that Planned Parenthood claims that Daleiden’s actions have cost them, something that the Thomas More Society attorneys dismiss as ludicrous. …

One of Daleiden’s lawyers let us all in on the joke.

Planned Parenthood continues to seek damages for a menu of alleged wrongs done to it, due to the publication of those videos. The First Amendment bars any of these damages, which stem from the public’s negative reaction to learning about the illegal and unethical activities of Planned Parenthood. You can’t hold the news media responsible for reporting the truth, and that’s just as true when the media are undercover journalists like David Daleiden and his team.

Of course, mainstream media will ignore this hearing. And the case. It strains even their capacity as contortionists to openly side with censors against reporters.

Even Gob Bluth’s conjuring skills have their limits.

UPDATE: The Center for Medical Progress, David Daleiden’s organization, has issued a press release on the outcome of the legal motion above.

SAN FRANCISCO, July 18–In a big victory for the First Amendment freedoms of citizen journalists on Wednesday evening, a federal judge in San Francisco indicated his intent to decisively cut back Planned Parenthood’s retaliatory lawsuit against The Center for Medical Progress for the undercover videos documenting Planned Parenthood’s sale of aborted fetal body parts.

In his tentative ruling, which he instructed the parties to treat as if it were substantially final, Judge William Orrick III rejected Planned Parenthood’s false and long-running smear that accused CMP citizen journalists, including David Daleiden, of attempting to incite “threats” and “violence” by publishing the undercover videos, instead of simply publishing a true news story of public interest.

Judge Orrick wrote he was “inclined to exclude from the case all damages that stem from third parties’ reactions to the release of the video recordings as impermissible damages barred by the First Amendment absent a defamation claim.”Judge Orrick left in place only “damages for investigating intrusions” into Planned Parenthood’s space, and “improvements to access-security measures for conferences and facilities,” as well as nominal and statutory damages.

The ruling significantly downsizes Planned Parenthood’s lawsuit, reducing potentially over $20 million at issue to less than $100,000. Most importantly, the ruling affirms that citizen journalists exercising their First Amendment rights to speak and publish cannot be held liable for any bad actions taken by others in the free marketplace of ideas, absent a clear showing of defamation or intent to incite imminent lawless action. Planned Parenthood could provide no evidence or testimony in the case to back up either accusation, and so a lawsuit that was once an avalanche of charges has been reduced to essentially a trespassing dispute.