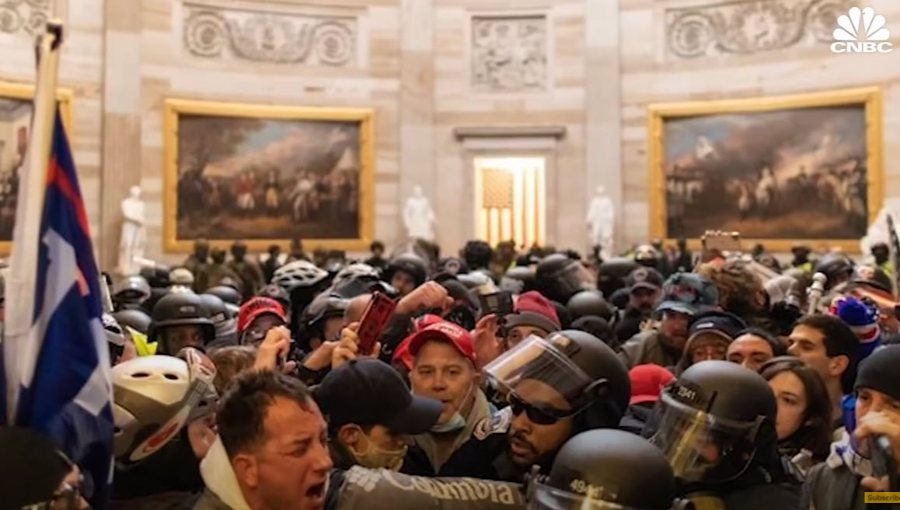 Americans were shocked by the assault on the U.S. Capitol that took place on January 6th, ostensibly by Trump supporters.

The U.S. Capitol Police Chief, who has since resigned, stated:

The violent attack on the U.S. Capitol was unlike any I have ever experienced in my 30 years in law enforcement here in Washington, D.C.

What Americans watched was a mob occupation and desecration of the temple of the American Republic. And the event will be forever exploited to discredit not only Trump but the movement he led and the achievements of his presidency. He will be demonized as no one else in our history since Richard Nixon or Joe McCarthy.

The Fallout Will Continue

The fallout from last week will likely continue for a long time. The pitchfork brigade that frightened those in the Capitol for a few hours will likely become the face of “conservatives” on direct mail pieces of the Southern Poverty Law Center and their ilk.

But those inside the Capitol were not typical of the vast majority of conservatives, including those who attended the D.C. meeting. Pastor and columnist Larry Tomczak was there. For wnd.com (1/6/21), he writes:

The diverse crowd was overwhelmingly respectful but righteously angry. The gathered multitudes were a far cry from the boisterous, violent and destructive protests of Black Lives Matter, Antifa and far-left extremists.

How Are We to Process This?

How are we to process all this? Dr. Richard Land, president of Southern Evangelical Seminary, commented on the attack:

Americans must always reject the resort to violence in pursuit of political goals. It is literally ‘un-American’ to engage in, or resort to, violent disregard of the law. This is not a question of conservative vs. liberal or Democrat vs. Republican. This is right vs. wrong.

One now-repentant participant inside the Capitol is quoted in the New York Post (1/8/21):

My decision to enter the Capitol was wrong, and I am deeply regretful to have done so. Without qualification and as a peaceful and law-abiding citizen, I condemn the violence and destruction that took place in Washington.

But, of course, if he’s looking for forgiveness from the left, he will not find it. There is no redemption from the left.

Part of the story that is so difficult to stomach is the double standard — the way the media treats protesters on the right versus those on the left.

Tristan Justice of The Federalist.com notes that in the last year there were 28 times that “media and Democrats excused or endorsed violence committed by left-wing activists.” He points out:

Democrats and their allies in the media are ready to condemn riots now that the turmoil has shifted to fit their narrative.

Looting and stealing and killing and violence for months was called “mostly peaceful protests.” Some of the reporters saying these riots were “mostly peaceful protests” had burning buildings behind them. They were reminiscent of Baghdad Bob, spokesman for Saddam Hussein in 2003, who would report that his forces were winning while the viewer could see the exact opposite behind Bob.

For months, we saw looting and unprecedented destruction of people’s livelihoods. Many of the people financially hurt were the working poor, including minorities, whose businesses and dreams went up in smoke.

Something Good Out of the Ashes

America is all about the rule of law. The creation of the U.S. Constitution was in response to a riotous situation.

Some commentators note that the frustrated Capitol protesters did not go as far as trying to spark an insurrection. But, interestingly, the Constitution came about because of a true insurrection. It was called Shays’ Rebellion (1786).

In her 1986 book on the creation of the Constitution, Miracle at Philadelphia, author Catherine Drinker Bowen says:

Desperate farmers, ruinously taxed — ‘by Boston,’ they said — and seeing their cattle and their land distrained by the bailiffs, had risen in revolt. With staves and pitchforks they had marched on county courthouses after the best Revolutionary technique, frightening sound-money men out of their wits and rousing General Washington to express disgust and anger that a country which had won a difficult war was not able to keep order in peacetime.

Response to this ultimately led to the creation of the Constitution — something good out of the ashes of calamity.

Meanwhile, America’s need to repent and return to God could not be clearer. One of the worst potential outcomes would be to encourage more Christian apathy on politics. It is never a good time to quit doing the right thing, even after major setbacks. After all, as Calvin Coolidge said:

Jerry Newcombe, D.Min., is the executive director of the Providence Forum, an outreach of D. James Kennedy Ministries, where Jerry also serves as senior producer and an on-air host. He has written/co-written 33 books, including George Washington’s Sacred Fire (with Providence Forum founder Peter Lillback, Ph.D.) and What If Jesus Had Never Been Born? (with D. James Kennedy, Ph.D.) Learn more at www.djkm.org​ and follow him at @newcombejerry or www.jerrynewcombe.com.