Known for Abstract Animated Characters, Artist Inspired by His Faith 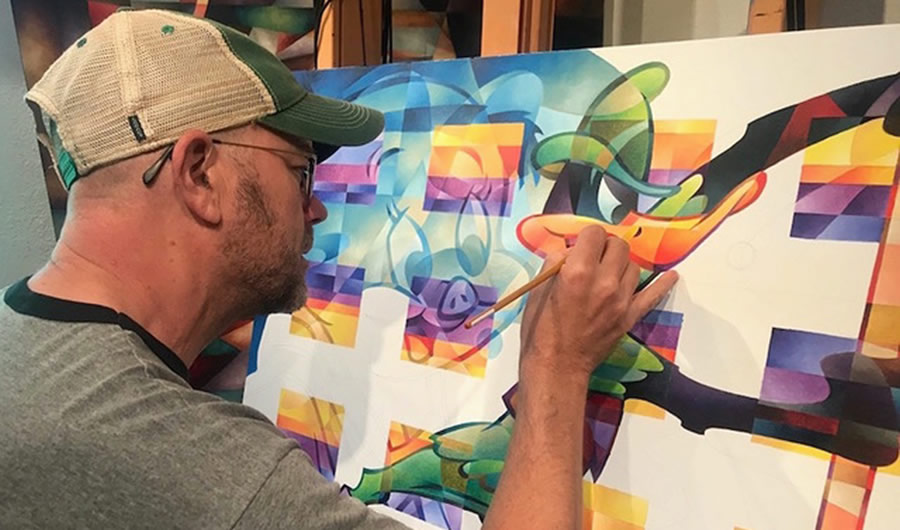 Ten years ago, Tom Matousek was at a crossroads. Having spent decades in corporate jobs, he dreamed of creating extraordinary art. He sat in his parked car and prayed: God, what am I designed to do? If I’m going to do this, it’s got to be now.

The self-taught artist began to invest early-morning hours in developing his unique abstract style. Lately that work has paid off. In 2016, he signed on with Disney Fine Art. Matousek is one of few artists authorized to create unique versions of beloved Disney characters, sold in galleries worldwide. Months ago, he inked a deal with Chuck Jones Galleries to paint Looney Tunes art.

His portrait work has also garnered attention. A friend recently commissioned him to paint Frederick Douglass. Little did Matousek know this year marks 200 years since the Civil War-era reformer was born, and his art would be featured as part of a national commission.

In an interview during a recent visit to Washington, D.C., with his wife Kris and their son, Tom shares a journey animated by many surprises.

The Stream: When did you begin painting abstract animated characters?

Tom Matousek: Growing up, I wanted to be a Disney animator. I’ve always been an artist, busy drawing and creating something.

A few years ago, my wife Kris and I had an opportunity to attend a fundraiser for the arts at the home of someone I greatly admired named Marty Sklar. He was the original head of Imagineering, the division of Disney that creates theme park rides. Walt Disney himself hired Marty right out of UCLA in the early days of animation.

We brought some artwork with us, including a portrait of Walt Disney and a couple of the characters created special for that event. I didn’t know then I could get in trouble for that! Thankfully, people really responded well to it. Even though we were afraid to approach Marty, he was very gracious and we hit it off.

The Stream: How did you then become a Disney Fine Artist?

Tom: Following that event, several people helped us. I had the opportunity to present my work to the CEO of Disney Fine Art. After a year, they decided to bring me on. The Fine Art team hosted my launch event at Epcot Center in early 2016.

My work for Disney focuses on their classic animated characters. It’s the movies I grew up with like 101 Dalmatians and Peter Pan, along with newer ones like Lilo & Stich or The Lion King. If I have an idea for a painting, I do my own interpretation.

The Fine Art team gets it approved through Disney Consumer Products. They decide if they want to sell it as a one-of-a-kind original in a gallery, or publish it with limited editions. The latter is best because I receive royalties from all those prints.

Kris: Nearly all of his work gets accepted. People are really responding to it.

Bringing the Abstract to Life

The Stream: Could you talk about your style? The hard lines and geometric shapes may be difficult for some people to get initially. Tom: As a self-taught artist, I’m a beer and hot dogs kind of guy. I often look at abstract art and say: I don’t get that at all, it makes no sense. In my art, I want everything to have meaning.

It’s my goal to create two pieces of art at the same time. I like to paint large. While you’re close to the painting, the shapes and colors draw your focus. But when you step back 20 or 30 feet, it makes sense and your brain puts it all together.

At my art shows, up close to a painting, people say: I sort of see what’s going on. Then they pull out their camera phones to look at it. It gives them that sensation of seeing it from a distance. Looking through their phone, they have a wow moment: How did you do that? It shrinks the image, in a sense.

Our pastor Jeff likes to use my art in sermons from time to time. Most recently, he showed the progression of one of my paintings. You could start to see the development. But it wasn’t until the very end that it was defined.

He used the analogy that we are all different. Each shape has its own color, its own use of light. Until every shape is put into place, it’s not complete. We as a body all play a part, and we’re all necessary in working together in love and harmony.

The Stream: How did your career as an artist begin?

Tom: When I was in high school, I drew houses for a local architect. Even though I loved art, it didn’t seem like a viable career. I had no inspiration regarding my career trajectory. I worked in Colorado snowboard shops for awhile, then I had a few corporate jobs.

Nearly 20 years ago, my wife Kris urged me to start a mural-painting business. It began to take off. Then in 2008, my pastor Jeff Reed did his thesis on art as a form of worship. He asked me to do a painting for a sermon, so Kris and I discussed it.

Kris: He had never painted on canvas before. It was always on walls and sort of cartoony, not fine art. I encouraged him to do an abstract.

Tom: So I did an abstract interpretation of one of Jeff’s poems. I brought it to church one day to explain it to him. I waited for everyone to leave, then went to our car to bring it out. We set it up against the wall and I started to explain it to him — the Trinity, the night sky, evergreens and the other symbolism.

Kris: A woman that we recognized from the choir was listening in. I asked if she was interested in art. She told me she was a retired teacher with multiple degrees in art. “I can tell you a hundred people might have tried this painting and not come close to pulling it off,” she said. “But he’s done it.”

Tom: Then this woman turned and spoke to me. She said, “I don’t know what you do, but this is what you’re supposed to do.” To receive this unsolicited praise from one who really knows art was a turning point for me.

The Stream: Where did you go from there?

Tom: My brother saw that painting and told me I was definitely on to something. I lamented that there weren’t more hours in the day to commit to this. He said, “There’s enough hours in the day, you just have to find them.”

Before our kids got up, I began to work on my art starting at four in the morning. When I heard the alarm, I didn’t want to get up. But I asked myself: how bad do you want it? Those early mornings became a special time to focus, create and experiment.

I prayed: God, I want to use this gift for You. I hope that You can use it somehow, and I can provide for my family with it. I’m just going to put it in Your hands.

I’m not a very good public speaker, but I can paint. Art opens doors. Once the door is open, it’s awesome to see what God does.

That’s when doors started opening. I was selected for an artist-in-residence position where I would travel to various art events. At one of them, we met a young woman who invited us to that fundraiser at Marty Sklar’s house. The rest is history.

Kris: The story is bittersweet because Marty Sklar recently passed away. He had asked Tom to paint him, because he wanted it for his grandkids. Marty saw the art via email and loved it. Then the portrait arrived about 24 hours before he passed away.

The Stream: What are some notable experiences you’ve had as a Disney artist?

Tom: It’s crazy the Disney legends and talented people I get to meet. I recently appeared at an event with Margaret Kerry, the original figure model for Tinker Bell.

In southern California last year, several artists were gathered at a VIP event. I remember staying up late and talking shop with some of these pros I really look up to. A couple of us left around midnight, and it turned out this new friend is also a Christian. We stayed up even later learning how similar our stories are.

Some of them are strong believers. You have to walk that line carefully. I’m not a very good public speaker, but I can paint. Art opens doors. Once the door is open, it’s awesome to see what God does.

Explore the art of Tom Matousek online. Consider how your gifts of art and creativity could be expressed in your local faith community.