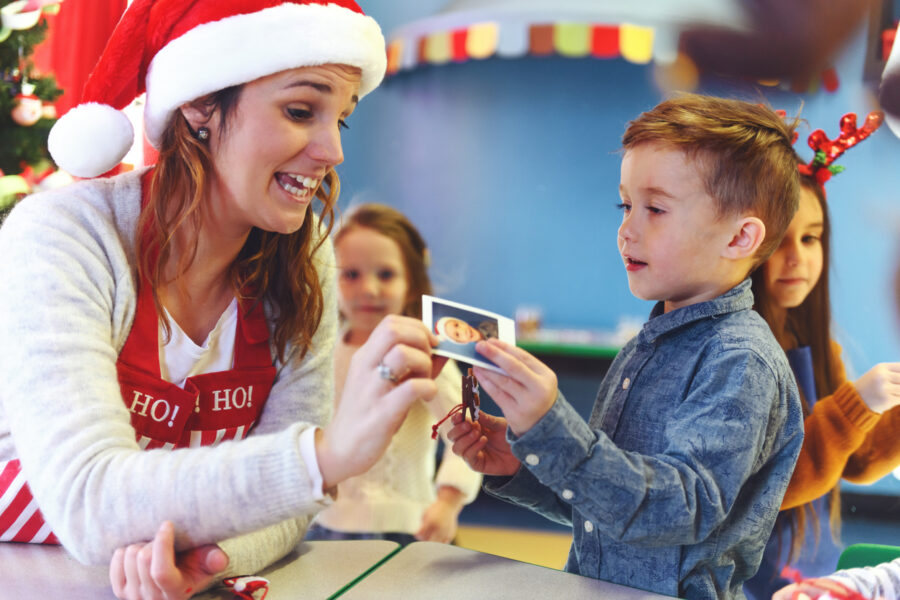 We sang lots of Christmas carols in my public school, and we sang them nearly every day. It’s December, 1976. The month I turned 7 years old. I am in first grade at Buckley School in Manchester, Connecticut.

The classroom itself was festooned with Christmas decorations. There was no explicit mention of Jesus in any of the decorations. Santa, Rudolph, Frosty the Snowman, they are all right out there. None of the vague “Winter Celebration” items that became a thing in the public schools by the ’90s.

But Jesus’s birth is, nevertheless, the point of much of the lyrics of those carols. Christmas carols that we were led in singing by the teacher herself.

My first grade teacher, Mrs. Gold, the one leading us six and seven-year-olds in those songs? She was Jewish.

She didn’t believe a word of it, the virgin birth and all that. But she loved Christmas. To her, it was a cultural thing, an American thing. A thing you could take part in even if you were not Christian.

Christmas did not threaten her nor, I think, did it threaten many non-Christians in my era in my region of the country. The historical prejudices and injustices suffered by minorities were a real thing, but we seemed, for that moment in time, to have arrived at a good place.

A place where no non-Christian need feel threatened by the beliefs of the Christian majority as expressed in the lyrics of, say, Christmas carols. Heck, your first grade Jewish teacher would even lead you in the songs.

Mrs. Gold believed in her own Jewish faith. She also taught us all about Hannukkah. There were a small handful of Jewish kids in my class. All the other kids knew who they were.

Mrs. Gold would work with them to teach us Jewish customs during the holiday season. It was from them, our classmates, that we learned about the Menorah (which was also a decoration on the classroom wall), the eight days of presents, how to spin the dreidel and sing the dreidel song, and so forth.

We may be returning to those times, with the Supreme Court’s ruling in Kennedy v. Bremerton. I cheered Justice Gorsuch’s words, writing for the Court, that “learning how to tolerate speech or prayer of all kinds is ‘part of learning how to live in a pluralistic society,’ a trait of character essential to ‘a tolerant citizenry.’” (The justice is quoting a 30-year-old decision, Lee v. Weisman .)

I thought of first grade and Mrs. Gold when reading “When the Prayers at School Aren’t Yours” in the Wall Street Journal. The writer, a novelist named Joseph Skibell, grew up a few years earlier than I did and in Texas. The few Jews in his small town — he was the only Jewish child in his first grade class — were made to feel like outsiders.

“We were different, and though we could function in the gentile world, our world didn’t actually seem to be a part of theirs,” he writes. In first grade, when something Jewish was mentioned, all 28 childen in the class would turn and look at him,

He objects to Gorsuch’s words about tolerance. He doesn’t believe it’s possible. If I had his experience I would have the same reservations. And I might have had them. My father is Jewish, but I was raised Catholic by my mother.

Some Christians will condemn my first grade experience as teaching a watered-down “civil religion.” They’ll say that mixing Hannukkah and Christmas like that created religious indifferentism.

That’s not what we little first graders in 1976 in Buckley School got out of Mrs. Gold’s class that Christmas. I think what we got out of it was a sense of tolerance. A real tolerance, a positive tolerance, rooted in appreciation for one another’s traditions.

Not the negative tolerance that was a thing by the 1990s. The kind that required that public displays of Christianity be curtailed lest they offend non-Christians. The kind of “tolerance” that wasn’t directed to helping religiously diverse people get along. The kind that was really designed to strip Christianity out of the public square. It expressed intolerance, not tolerance.

But my point here isn’t that one, as crucial as it is to recognize that much concern for tolerance is really just an excuse for pushing secularism. My point is that such a way of living together is possible — not easy, and costly to minorities and requiring of majorities real care for others. But possible. And desperately needed.

The World I Experienced

The proportion of Jewish kids in my childhood grew slightly, but were always small in number. All through elementary, junior high, and high school, we rode the bus with them, went to class with them, played with them, grew up with them, attended their weddings.

We knew where they worshipped, the conservative (and only) synagogue in town. When I slept over at some of their houses, I was sometimes their guest at Hebrew School the next morning.

In all those years, I cannot recall anyone ever treating them differently, ever mistreating them because they were Jewish. The tolerance Mrs. Gold taught us in first grade, the same tolerance Gorsuch now calls for, served us well throughout our lives. I thank God for it and I pray for its return.

These are my perceptions. This is the world as seen through my eyes. It may well be that my Jewish friends with whom I grew up would describe the experience differently. Skibell does.

But that was the world as I experienced it. That experience is one reason, though not the only one, I think Justice Gorsuch got it exactly right.

Don’t Skip This Important Part of Our Holiday Traditions