Kellyanne Conway Has Walked the Walk 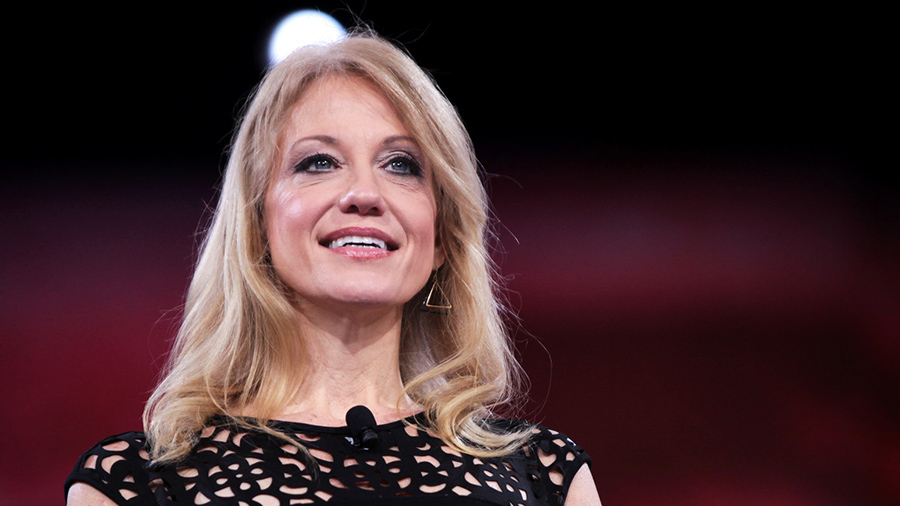 Since Donald Trump’s victory in last week’s presidential election, several stories have noted that Kellyanne Conway broke a metaphoric glass ceiling as the first woman in U.S. history to lead a successful presidential campaign. Conway was tapped by Donald Trump on August 17, 2016 to be the campaign manager and has been credited with transforming Trump’s campaign overall and appealing to female voters.

Even hostile media have given her back-handed compliments. The Guardian called Conway Trump’s “secret weapon,” reporting that her greatest skill was that her words resonated with “white suburban women across America, who would never dream of saying a bad word in public and whose standard response to something they disagree with is to smile, say ‘you’re so funny’ and swiftly move on.” The New Yorker’s Ryan Lizza credited Conway with closing the 10-point gap in the polls before Trump’s speech in Chester Township, PA, four days before the first debate, and wrote that she was the “only person who could persuade him to prepare for his crucial showdown with Clinton.”

Prior to entering politics, Conway practiced law. She received a B.A. in Political Science and International Relations from Trinity University-Washington in 1989 and a J.D. in 1992 from The George Washington University Law School. She is still a member of the bar in Maryland, New Jersey, Pennsylvania and Washington, D.C.  Conway also served as a judicial clerk in Washington D.C. and taught law as an adjunct professor at the George Washington University Law Center. She is married to George T. Conway III, one of the key players in former President Bill Clinton’s impeachment.

Conway founded WomanTrend in 1993, a polling company whose purpose was to track and interpret “the social, cultural, financial, professional and health trends influencing — and being influenced by — women.” She founded the Polling Company, Inc. in 1995 and made WomanTrend a key division of the new company. The Polling Company offers “a wide range of primary and secondary, quantitative and qualitative consumer-centric research services, including polls, focus groups, media management, and alternative, cutting-edge research technologies.”

Conway is also an accomplished media spokesperson. She has provided commentary on over 1,300 television shows and her work has been published by The Wall Street Journal, The Washington Post, The New York Times, The New York Post, The Washington Times, USA Today, National Review, Human Events, Investors’ Business Daily and Politico. In addition, she has been profiled in over a dozen magazines, newspapers and television programs.

Conway is now poised to take a position within the new Trump administration, although which one is not yet clear. According to Politico, Conway is one of two women mentioned for the job of White House press secretary.  “I think that job is hers if she wants it,” one source said. “No one was more effective at carrying our message than her. On the campaign, very few staffers were accurately titled. She was officially the campaign manager but, really, she was the top spokeswoman.”

Mainstream media stories on Conway have focused almost entirely on her political wizardry. The New Yorker story on her is entitled “Kellyanne Conway’s Political Machinations.” The media have shown little curiosity in Conway’s Christian faith, or the positive role she likely played in building bridges between Christian voters and the Trump campaign.

From the moment Hillary Clinton named Tim Kaine as her running mate, Americans were treated to fawning stories about Kaine’s “devout” Catholic faith, despite his commitment to abortion-on-demand and same-sex “marriage.”

In contrast to Kaine, Kelly Anne Conway has walked the walk. She has long been a pro-life advocate, and has worked for the pro-marriage National Organization for Marriage (NOM). She and her husband have four children, ranging in age from six to eleven.  Growing up, Conway’s family was Catholic — and she and George Conway have continued to practice their faith as a family. In fact, The New Yorker reported that Conway stopped appearing on Bill Maher’s Politically Incorrect show because “she had grown tired of his anti-Catholic sentiments.”

Pro-life activist Kristan Hawkins, president of Students for Life, talked to The Stream about Conway. “Kellyanne was already a star in her own capacity before she led Donald Trump’s campaign victory,” Hawkins said. “Her broad knowledge of key issues that matter to conservatives was well-established, especially in regards to abortion, conscience rights and religious freedom. Her presence in the White House should be not only a source of comfort to those of us who have worked with Kellyanne for years, but also a source of pride and encouragement. Kellyanne is one of us, a respected leader in the pro-life movement who helped guide organizations with key messaging and wisdom many times over. President-Elect Trump is wise to keep Kellyanne by his side as he takes the oath of the 45th President of the United States.”

Rep. Marsha Blackburn, Chair of the Select Panel on Infant Lives and member of the Trump transition team, said, “Kellyanne has worked worked tirelessly throughout her career as an advocate for the pro-life movement. She understands that a majority of Americans support common sense regulations for the abortion industry and were deeply troubled by what a Hillary Clinton presidency might mean for legislation, like the Hyde Amendment, a four-decades-old measure to prevent taxpayer funding for abortion-on-demand that, thanks to the 2016 Democratic platform, no longer enjoys bipartisan support. Kellyanne is one of the most talented strategists in politics, and I am grateful for her leadership throughout this campaign in communicating President-elect Trump’s pro-life message. I look forward to working with the new administration in our continued efforts to protect women and the unborn.”

If Conway is offered a prominent position in the new Trump administration, it would be one signal that President-elect Trump plans to honor the strong pro-life commitments he made during his campaign. We hope and pray that that happens.