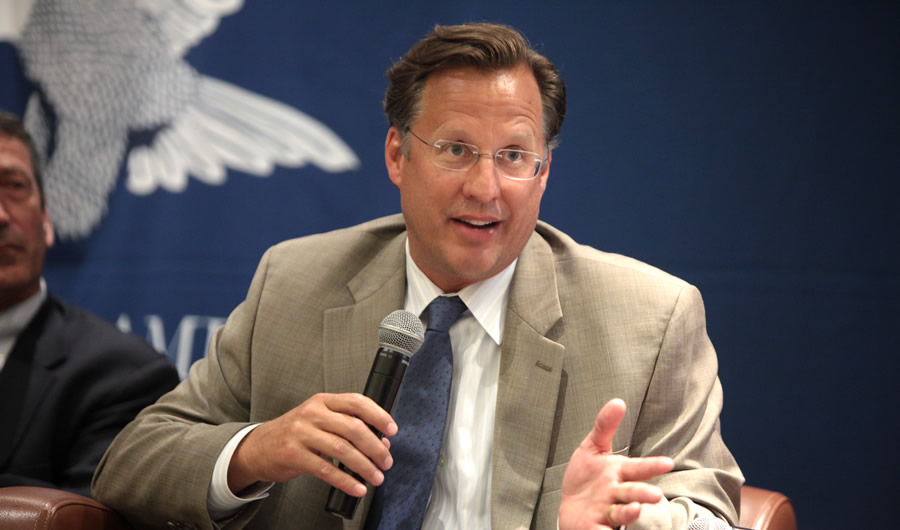 U.S. Congressman Dave Brat speaking at the 2015 Young Americans for Liberty National Convention at the Catholic University of America in Washington, D.C.

For the past six weeks I’ve been urging readers to think of the upcoming mid-term elections as the National Impeachment Referendum. For very good reason. The Democrats in the House have promised their media oligarch donors and black-hood-wearing activists that if they gain a majority, they will impeach the President. Evidence? Who needs evidence? They’ve been picking through dumpsters since election night 2016 for pretexts. They’ll find something. Count on it. And the business of government will stop, as the same people who let Antifa take over Portland’s streets let it take over the House of Representatives.

I’ve been saying on the radio to anyone who’ll listen: I don’t care if your local GOP candidate is named “RINO McAdulterer,” get out there and vote for the schmuck. It’s better than letting the inmates take over the asylum.

All that is true.

But something else is also true. A good number of those Republican congressmen aren’t schmucks at all. They are honorable, civic-minded citizens. A few are genuine conservative intellectuals. Patriots, who made their lives worse (not better) by wading into Congress. But they did it for their districts. And for our country.

Today I’d like to highlight one of those Congressmen. He’s in a tough race for his seat, so I hope that those who aren’t lucky enough to have him representing them will show him support somehow. If you can’t donate, pray.

I speak of Dave Brat of Virginia’s Seventh District.

Immigration determines whether America will be saved, abortion whether it deserves to be.

You might not have thought about Rep. Brat since he did the whole country a service, by beating the odds to defeat Swamp Creature Eric Cantor. You’ll remember Cantor as one of the most open-borders congressmen in either political party. Flush with cash from lobbyists and the darling of Party elites, Cantor lost to a professor of economics new to politics. As Wikipedia admits, “From 2010 to 2012 [Dave] Brat headed Randolph-Macon’s BB&T Moral Foundations of Capitalism program, one of sixty similar programs and chairs in the philosophy and economics departments at United States universities devoted to the study of capitalism and morality.”

Brat sees with laser focus that American prosperity is a by-product of moral virtues, the self-control and love for God and family that make ordered liberty viable. In fact, if there’s one guy in Congress who explicitly holds to and preaches the Ten Principles of The Stream, it’s Rep. Brat.

Dave Brat is the kind of serious, principled person we need more of in Congress. In fact, we should hope that he moves into a leadership role in the House.

Rep. Brat has served since 2014, and he has compiled a record to be proud of. He helped bring down the compromised and vacillating John Boehner as speaker. Brat has led in repeated GOP attempts to repeal the clunky, destructive Obamacare program. Brat strongly backed President Trump’s efforts to stem the opioid crisis. He has also bucked the Deep State and big government advocates, by joining liberty advocates like Sen. Rand Paul to protect Americans’ privacy from mass data-mining, as when the NSA reads our email.

He’s Right Where It Counts

Running against a Democrat who has flip-flopped on “sanctuary cities,” Brat won a 100% rating from immigration control group NumbersUSA.

Immigration determines whether America will be saved, abortion whether it deserves to be. And Brat is sound on that issue, too. He has scored an epically low 6% for his voting record from Planned Parenthood. The pro-life Susan B. Anthony list strongly backs him:

We are proud to endorse Congressman Dave Brat, a principled pro-life champion and a strong ally in Washington,” said former congresswoman Marilyn Musgrave, SBA List’s Vice President of Government Affairs. “Dave is a leader in the fight to end horrific late-term abortions, stop taxpayer funding of abortion businesses like Planned Parenthood, and defend the conscience rights of pro-life health care workers. While his opponent, Abigail Spanberger, is an extremist backed by the radical pro-abortion group EMILY’s List, Rep. Brat can be counted on to stand up to the abortion lobby and protect unborn children and their mothers. We urge pro-life Virginians to re-elect him this November.

Brat has worked with other Republicans to support President Trump’s economic agenda, which has yielded strong job growth for Virginians. As Brat reported to his constituents:

In August, the number of job openings hit an all-time high at 7.14 million. In fact, there were more job openings than workers even looking for jobs.

Wage growth is at its highest it’s been in 17 months.

An average American family (married with two kids) will save $2,917 in taxes this year.

A single taxpayer will save an average of $1,400 in taxes this year.

Confidence in the government’s economic policies rose in October to its highest level in the past 15 years – surpassing very strong economies in Singapore, Germany, Japan and Switzerland.

In FY 2018, this administration eliminated 12 regulations for every 1 new significant regulation passed.

This administration’s regulatory reform efforts have led to $23 billion in cost savings.

In September, NFIB’s Small Business optimism index was at its third highest reading in the survey’s 45 year history and the National Association of Manufacturers’ optimism survey is the highest ever.

We Need More Dave Brats to Beat Back the Spoiled Brats

The Democrats, with their increasingly brazen embrace of socialism for one country with open borders, would undo most of that. Closer to home, according to a non-profit think tank, “families in Virginia’s 7th District would lose $40,621 in take home pay over the next 10 years if Democrats are successful in their desire to roll back [Trump’s] tax cuts.”

Dave Brat is the kind of serious, principled person we need more of in Congress. In fact, we should hope that he moves into a leadership role in the House.

So even though I’m a native New Yorker living now in Dallas, I’ll be watching Virginia elections returns very closely.