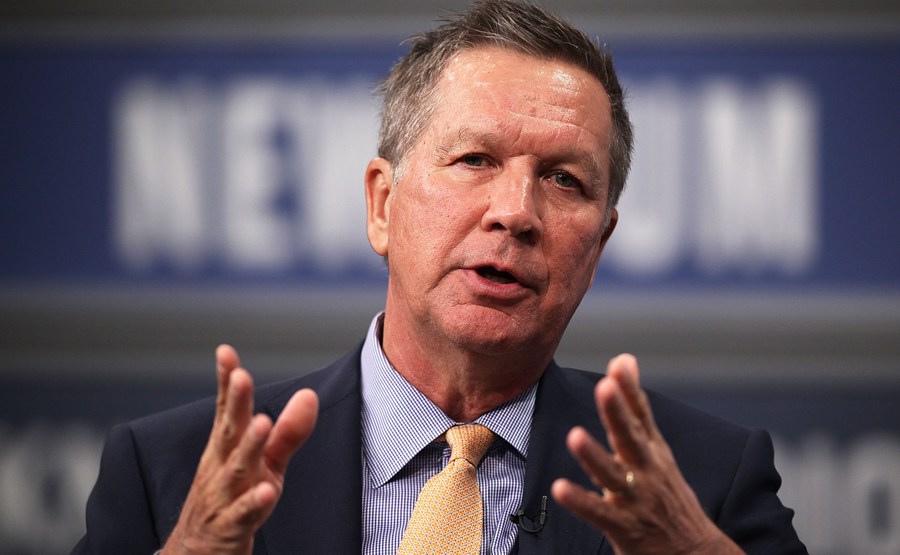 John Kasich appeals to voters longing for a kinder, gentler brand of politics. In a primary cycle that has at times degenerated into juvenile vulgarity, some voters appreciate Kasich’s refusal to participate in the mudslinging. But is Kasich’s approach as virtuous as he wants to make it seem?

At the Fox News debate in Detroit last Thursday, Ted Cruz and Marco Rubio continued their recent strategy of attacking frontrunner Donald Trump on everything from his ideological “flexibility” to his past donations to Hillary Clinton and other major Democrats. When debate moderator Chris Wallace challenged Kasich to comment on a video his campaign put out criticizing Donald Trump and linking him to Russian leader Vladimir Putin, Kasich’s response was simple: “I’m not biting.”

Kasich then proceeded to take Wallace and the audience “around the world,” pivoting away from the attack on Trump to the multitude of foreign policy concerns facing the United States today. Once Kasich wrapped up his tour, it was time to go to commercial break. Kasich had done it; he had successfully stayed above the fray.

On the campaign trail, Kasich has embraced this role. He has not missed an opportunity to raise concerns about the harmful effects of our rhetoric, construing it as divisive and unhelpful. Though he hasn’t defended Donald Trump, he has decried the “smears” made against him by his fellow candidates. By offering a “positive tone” as an alternative to the campaign soundbite grenades being lobbed back and forth between “little Marco” and “lyin’ Ted” on the one hand, and the Rubio-identified “con man” of Manhattan on the other, Kasich has attempted to project respectability and dignity into a primary cycle he finds sorely lacking in both departments. His strategy has seemed to tilt more and more toward being the “adult in the room,” rather than descending into the political tar pits of daily back-and-forth verbal sparring and negative advertising.

The question of Kasich’s motives aside, this approach seems to be keeping him relevant in a race in which he has yet to win a single state. It’s hard to deny that Kasich’s presence has been an obstacle to Marco Rubio’s path to the nomination. On Super Tuesday, Kasich’s 9% haul in Virginia effectively kept Rubio from being able to overtake Trump, who won by less than three percentage points. In response to this dynamic, many in the media and conservative political commentariat have noted that by weakening Rubio in this way Kasich is functionally aiding Donald Trump in his quest for the nomination.

More disturbing, though, are the deeper implications of Kasich’s rhetorical strategy of keeping his hands mostly clean of Trump-related dustups. What does Kasich’s “positive” or “adult” role actually mean for a party threatened by existential crisis? While GOP leaders like Mitt Romney and John McCain are publicly opposing a candidate they believe to be a dangerous force in conservative politics, what message is Kasich sending about how to handle a bully like Trump? Perhaps a historical comparison might help.

Donald Trump is not Adolf Hitler, but he is a strongman candidate, a demagogue who promises to force nations to take “deals” that are advantageous to the United States (some leaders, like Mitt Romney, say this will induce trade wars which will send the economy into recession), make Mexico pay for a wall (Mexican leaders insist they will do no such thing), and most shockingly, force American soldiers to murder women and children if, as commander-in-chief, he deems it necessary. “They’re not going to refuse me. Believe me.” Many people, nations, and institutions did not see Adolf Hitler coming (and again I am not saying that Trump is Hitler), but one man in particular identified the dangers of a messianic demagogue long before most; his name was Dietrich Bonhoeffer.

Bonhoeffer was a theologian, pastor, and professor who resisted the Nazis and Hitler both publicly, and later, secretly through participation in the German resistance that sought to assassinate Hitler. After his arrest but before his eventual execution in a Nazi concentration camp, Bonhoeffer wrote against the kind of Christian ethic that John Kasich seems to symbolize in this election cycle: “[The man of virtuousness] must close his eyes and mouth to the injustice around him. He can remain undefiled by the consequences of responsible action only by deceiving himself … that which he fails to do will leave him no peace.” Bonhoeffer argues that this kind of virtue almost inevitably turns into self-righteousness and hypocrisy, and Kasich’s ostentatious appeals to unity fit this description well.

Maybe Kasich just has better political instincts than Rubio, as we have seen the Senator from Florida fade in the polls even as his attacks on Trump have started working. This brings to mind, though, the words of another Republican with Cuban dirt under his fingernails:

It is not the critic who counts; not the man who points out how the strong man stumbles, or where the doer of deeds could have done them better. The credit belongs to the man who is actually in the arena, whose face is marred by dust and sweat and blood; who strives valiantly; who errs, who comes short again and again, because there is no effort without error and shortcoming; but who does actually strive to do the deeds; who knows great enthusiasms, the great devotions; who spends himself in a worthy cause; who at the best knows in the end the triumph of high achievement, and who at the worst, if he fails, at least fails while daring greatly, so that his place shall never be with those cold and timid souls who neither know victory nor defeat. (Theodore Roosevelt)

Marco Rubio may know defeat soon, but if he does, he will know that he stood up to a bully, that he took responsibility for others, that his striving was spent in a worthy cause. Will John Kasich be able to say the same?