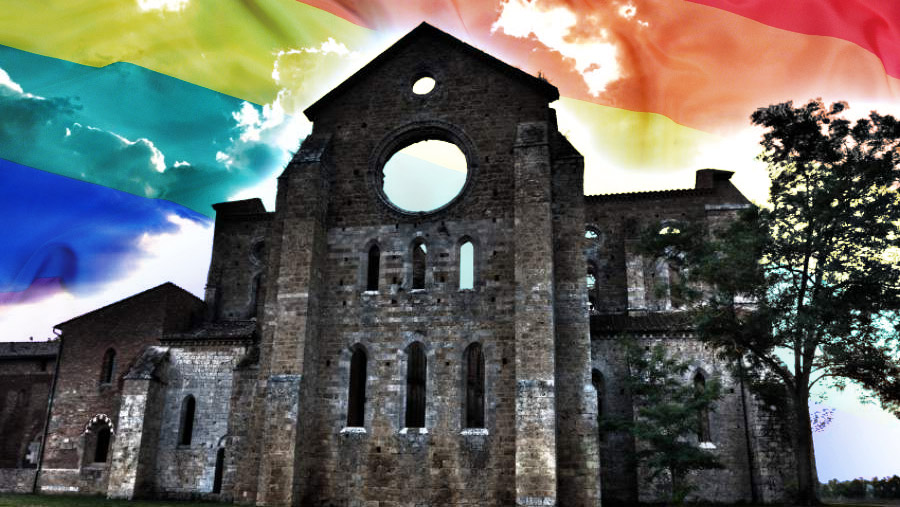 Readers who follow me know this. I oppose anyone who tries to set up an intolerant state religion. So I don’t want the West admitting or harboring Muslims who wish to do that. I criticize misguided Catholics who look for loopholes in Vatican II to let them promote such a state. If I knew of any Protestants interested in such a project, I’d loudly warn against them.

It’s profoundly repulsive to normal folk, the prospect of the grubby-handed government reaching down into that most private of places: the human conscience. Our nation was founded, in part, as a refuge from that.

America was from the start a de facto Christian nation with no (national) established church. The basis for legislation would be the common good and the natural law. That’s as perceived by the people and guarded by the Constitution. Still, believers felt free to cite scripture in arguing for laws and social change. How many abolitionists quoted the Bible in their arguments against slavery? The Civil Rights movement claimed it in the fight for racial equality. Right up through 1960 or so, you could still say the U.S. was a tolerant Christian nation, which guarded the rights of the person.

But what if the system we have now, as hijacked by activist courts and encouraged by the culture, is installing its own religion? A secular cult with its own mysteries and rituals? Its own brand of witch hunt?

The Supreme Court ruling in the Masterpiece Cake case reveals that we might well already have such a regime. And it’s just barely restraining itself from tightening the screws. It’s figuring out how subtle or blatant it needs to be when it punishes Christians for living out their faith. Indeed, the majority vote on that decision didn’t defend the Christian baker’s right to act according to his conscience. Instead, it simply said that the commissioners who denied him that right used biased language against religion. In comparing a Christian’s belief in traditional marriage to the causes of the Holocaust, they proved a tad too heavy-handed.

Legal scholar Hadley Arkes called this out in his dark analysis of that recent decision. He wrote:

For years it was understood that the law need not be at all “neutral” between religion and irreligion, that there were compelling reasons, for the public good, to encourage the religious life. But now the claim is reduced simply to an obligation not to be indecorously nasty while the law refuses to respect religious convictions.

So no, religious liberty doesn’t protect you from having to act on the State’s value judgments. If the government says that same sex marriage is right, then you will have to celebrate it. To mouth the words of agreement. Or else you will be punished. But we won’t openly compare you to the Nazis. At least, not yet.

Speaking of Nazis, is it bad taste to point out that they were secular humanists? That their evil formed a link in a long chain of atrocities by worldly theocracies?

France was once intolerantly Catholic. Before the Revolution, though, King Louis XVI gladly removed the laws that had penalized Jews and Protestants. France’s clergy (the First Estate) even voted in favor of representative government — giving up their own power to influence laws. But the secular ideologues who seized control weren’t satisfied. Instead, they wished to enforce the private cult that had beguiled France’s intellectuals. It was a rigid, inflexible Rationalism which would build heaven on earth. The Revolutionary government demanded control over the churches. It stole their land, closed their buildings, and finally started massacring clergy. This culminated in a war of genocide focused on the region called the Vendee. There, soldiers of the new, secular theocracy conducted mass drowning of pious peasants. The death toll? Perhaps as high as 300,000 people. Leave aside the dead from the wars of “liberation” that Napoleon waged across Europe.

Revolutionaries were even more ruthless in Bolshevik Russia, where millions of Orthodox Christians died at the hands of the “militantly atheist” regime. The Spanish Republic killed thousands of priests and other believers, burnt churches and defiled the corpses of nuns. The socialist government of Mexico in the 1920s tried to herd all Catholics into a new “national” church. It forced priests to marry, and replaced bread and wine at Mass with tortillas and tequila. Dissenters got shot by the thousands, and only a peasant revolt (by the “Cristeros”) forced a halt in the persecution.

Adolf Hitler’s regime closed all religious schools and organizations. In its quest to impose a single, secular utopia on all its residences, it bullied, co-opted, or terrorized the churches. So many priests died at Dachau that it got the nickname “The Priests’ Camp.” And of course it murdered millions of Jews, Slavs, Gypsies and handicapped people whose existence offended its vision of earthly perfection.

The death toll of secular humanism in just the 20th century exceeds many, many times over the death toll of the worst persecutions by Christians. It dwarfs the pyramid of skulls that Muslim invaders heaped up in India. Secularism rode through the 20th century like a new Ghengis Khan. It emptied cities. If you count unborn children as human beings, our own pursuit of sexual liberation has claimed more than 54 million lives. That happened right under our noses.

Regimes beguiled by this-worldly myths of “Progress,” “Nation, “Race” or “Socialism” are quite prone to murder. In fact, they feel much less constrained by respect for life or freedom than any church ever has been. Secular zealots prove much more thin-skinned than inquisitors. They’re aware on some level how groundless their creeds really are. So they’re far more outraged by resistance. That goads them to “prove” otherworldly creeds false by breaking believers’ spirits. Since they must make their heaven in this world, they demand their rewards here and now.

And one of the great rewards of power is punishing your enemies. Forcing them to bend to your will and acknowledge your dominance. Making them live by your moral code instead of their own, or punishing them for it — with poverty, prison, or worse.

American secularists aren’t immune to this temptation. Quite the contrary. They despise our worldview as a primitive superstition. They consider those who cling to such religions “deplorables.” And to prove it, they want to break us. For that, defending the “dignity” of homosexuals offers an excellent pretext.

The Dignity of Naked Apes

These neopagans borrow from our creed, of course. The concept of “human dignity,” for instance. In cold fact, they believe we are all naked apes. Darwin “proved” to them that our race and our lives are a vast cosmic accident. (Though they still feel mighty important.) To fill that vacuum of meaning, they’ve inflated the person’s claim to the “pursuit of happiness” without reference to morality.

In Obergefell v. Hodges, the post-Christians decreed that a naked ape’s “dignity” demanded the legal acceptance of same-sex marriage. Four justices who voted in the negative warned that this threatened religious liberty. And now we see that they were right. The only thing that saved this case from wrecking a Christian’s livelihood was the tactlessness of his persecutors. They won’t make the same mistake next time.

We have only two ways, in the long run, to protect Christian freedom. Either one will be hard. Each would exact a steep political price, and have some unwanted side effects. We must convince the culture once more that homosexual activity is morally inferior to what happens in normal marriage. Or else we must convince it to accept total freedom of contract. To allow anyone to discriminate for any reason or none at all. No one ever sued a gorilla for preferring members of his troop over another.

Either we sell America on Christianity once again, or we demand it accept the real implications of rejecting it: Nothing matters, no one has dignity, and people may do as they please.

Either one of these solutions would be better than what we face now: A deranged cult of human dignity grounded on absolutely nothing, a pornographic Puritanism.

Why These Women Walked Away From the LGBT Lifestyle