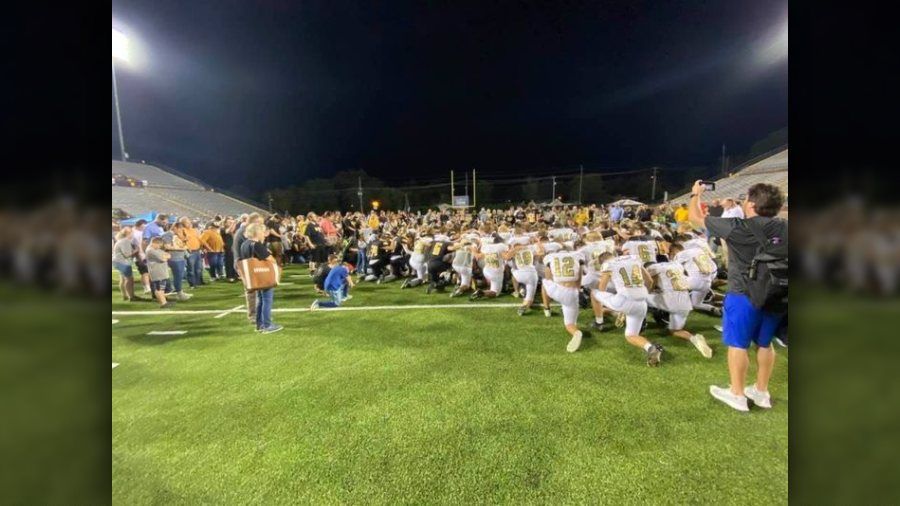 A large group of public school football players and parents took to the field to pray after a game last week following a decision by Putnam County Schools administrators in Tennessee banning staff from leading prayer for students. The decision came after Americans United for Separation of Church and State demanded that teachers, staff and coaches stop leading prayer, according to Fox 17 News in Nashville.

The school board consulted their attorney. A spokeswoman for PCS stated that case law prohibiting prayer or proselytizing is “clear … Courts have consistently ruled that prayer and proselytizing cannot be sponsored by schools or school personnel.”

In a statement to Fox 17 News, the school board wrote:

As a district, we absolutely understand the importance of prayer in the lives of our students, faculty, and staff members. We support the right of students to participate in and lead spontaneous prayers. That right is and will continue to be protected. We also understand that faculty and staff members can not lead or participate in the spontaneous student-led prayers.

Some parents were upset with the decision and vowed to show support for the post-game prayers. They coordinated a prayer event following Friday night’s game between Upperman High School and Stone Memorial High School.

Bob Vick, a graduate of a PCS school, posted a now-viral picture on Facebook of students praying on the field.

“Satan’s power was defeated tonight, as the threat of legal action to forbid prayer after the game was overwhelmed by player led prayer, supported by parents and fans in solidarity on Overall Field,” he wrote. “God bless the Baxter and Stone players for their faith and courage.

Joy Break: Officer Prays for Students, Staff and Nation at Flagpole Each Day

Joy Break: ‘Angels Caught Me and Jesus Loves Me!’