The veterans had gone on a weekend trip to see war memorials. 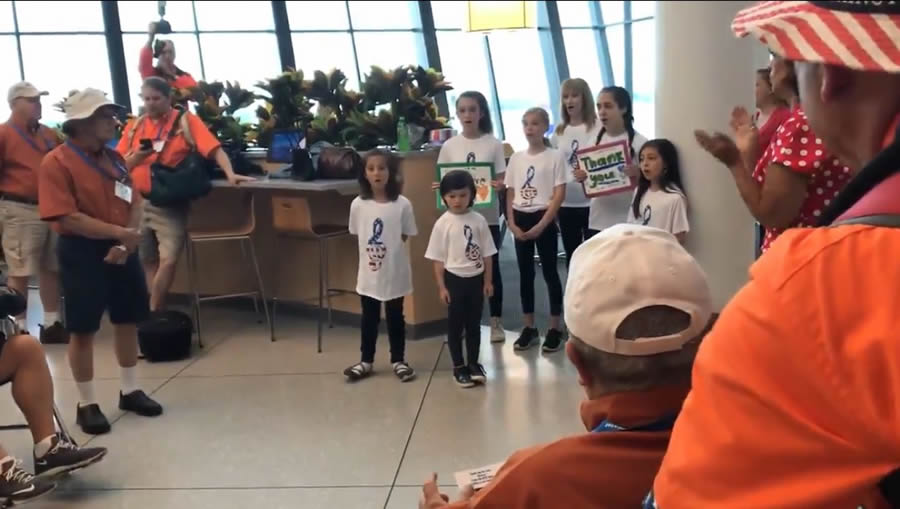 About 60 World War II, Korean War and Vietnam War veterans received a welcome home they won’t soon forget at Rochester airport. The veterans had gone on Honor Flight Rochester Mission 66 to Washington, D.C. over the weekend. While there, they visited the nation’s war memorials, reported Fox News. When they returned home on Father’s Day, they were welcomed by a crowd singing God Bless America.

Monroe County District Attorney Sandra Doorley tweeted a video of the event. She wrote, “A nice, meaningful moment from today’s Welcome Home to the Veterans of Honor Flight 66!”

A nice, meaningful moment from today’s Welcome Home to the Veterans of Honor Flight 66! pic.twitter.com/KXWBNd7ZPP

Vietnam veteran John Cusolito told Spectrum News the welcome was wonderful. “They treated us like kings. It was the most marvelous thing in the world.”

Marine vet Ralph Miller had his own army show up. “Well, I’m lucky that both of my sons are here. One brought my granddaughters, the other one was my guardian on the trip and his sons are here with my daughter-in-law. So, I’ve got my wife who is here, the whole family is here. So, when it comes to Father’s Day, I’ve got it made here.”

In another tweet, Doorley said, “As the daughter of a World War II Veteran, I could not be prouder to spend Father’s Day with the Veterans of Honor Flight Rochester Mission 66! @ROCAirport.”

As the daughter of a World War II Veteran, I could not be prouder to spend Father’s Day with the Veterans of Honor Flight Rochester Mission 66! @ROCAirport pic.twitter.com/jhiXa9MKQD

Thank You, Our Beloved Vets