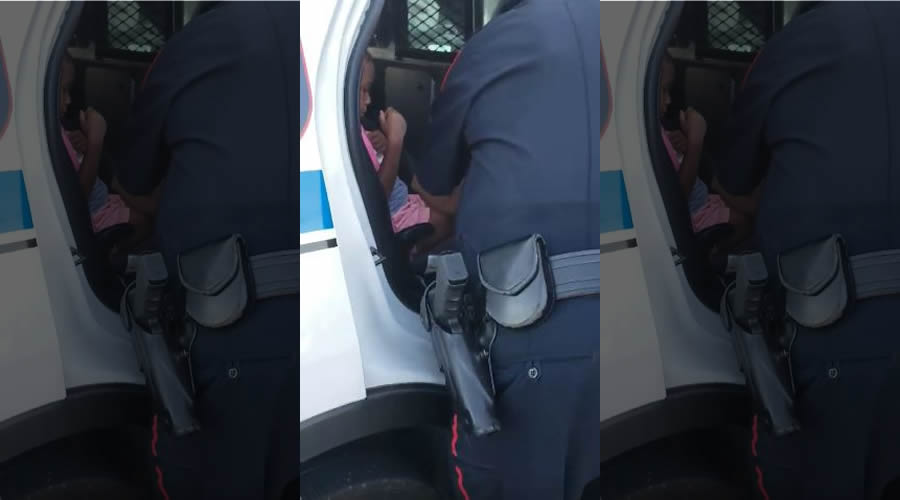 A little girl recently got a special ride to school in a police cruiser … thanks to an officer who stopped to help her mom.

Tuesday a week ago Shemecas Mabry was driving her daughter to school when she heard a strange sound coming from one of her tires. Thinking that she had a flat, she stopped at a nearby gas station so she could get air. When she got out of the car, she saw that it was not just a flat tire. “There was a big hole — the side of the tire had completely come apart,” Shemecas told The Stream.

Shemecas called her daughter’s godparents for help, but her daughter only had about 30 minutes to get to school on time. Just then, Police Officer John Rozyskie drove up. “He asked me if I needed help getting air in the tire,” but “he didn’t see the tire blown,” Shemecas explained. She showed him the tire and explained that her daughter would be late. “He said, ‘I’d like to take her to school.'” He helped put her daughter’s car seat in his SUV and strapped the little girl in.

“For me, it solidified that the world needs to be reminded that there are good people who sometimes wear uniforms,” Shemecas said. “God places everybody exactly where they need to be when they need to be there.”

Shemecas posted a video of Rozyskie helping her daughter into the cruiser. “The devil tried me this morning,” she wrote, “but God had control of the whole situation.”

Joy Break: Man Sings Through a Nursing Home Window to His Wife Who Has Alzheimer’s