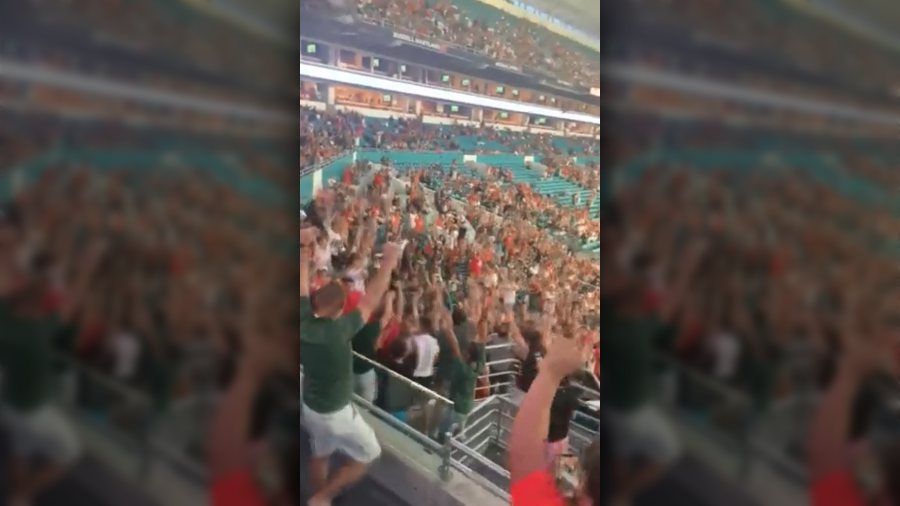 Fans give standing ovation after some Miami fans caught a falling cat.

The best catch of the young football season!

During the first quarter of Saturday’s football game between Miami and Appalachian State, fans caught a cat that fell from an upper level. The video of the cat dropping into an awaiting American flag has since gone viral, with at least 70K views on Twitter.

The black and white furball had somehow entered Hard Rock Stadium and was dangling from the facade of the upper deck, reported the Associated Press.

Craig Cromer with his wife, Kimberly, are season ticket holders who bring an American flag to each home game. When they realized what was happening, they grabbed their flag and held it out as a net. “They were trying to grab [the cat] from above and they couldn’t reach it but they were scaring it downward,” Craig said. “It hung there for a little while with its two front paws, then one paw, then I was like, ‘Oh my goodness, it’s coming soon.'”

The cat bounced off of the flag and was taken away by stadium security. It did not appear to be injured.

“Strangest thing that’s ever happened at a game,” said Kimberly Cromer. By the way, the Hurricanes won 25-23. You can say they won by a whisker.

Watch the standing ovation the couple received for the kitty catch:

New video of the cat catch at Miami tonight from @Ron0917 … pic.twitter.com/yQv0lzWypJ

Joy Break: ‘I Don’t Get Nervous’