Joy Break: How One VA Cop Makes a Difference Playing With Dolls and Coloring Pictures 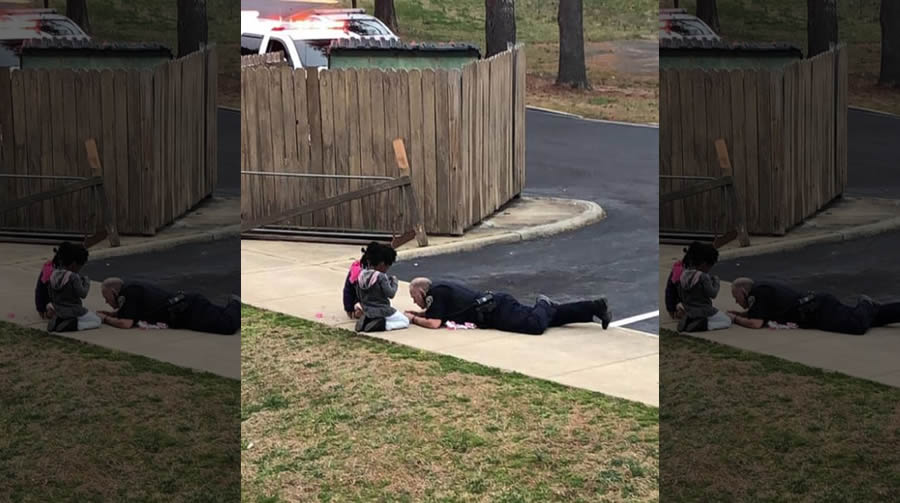 A South Hill, Virginia, police officer recently went out of his way to make sure some kids felt safe after a suspected gas leak. Corporal C.B. Fleming got called to an apartment complex for a possible leak on Valentine’s Day. It ended up being a false alarm.

For some kids, Fleming’s presence in their neighborhood made them feel uneasy. Fleming decided to do something about that. He sat down on the sidewalk and played dolls with the girls and colored pictures with the boys. One mom captured the scene on her phone.

“People need the positivity,” Iesha Roper Boswell told CBS 6. “I was telling him that my daughter, my niece, and some of the other children here were afraid of cops. So when he came and played with them, I captured that moment, not because I thought it would go viral, but it was amazing that my niece didn’t break out into tears.”

Fleming will soon celebrate 15 years with the police department. “When I got into this job, I knew there was something different, other than just writing tickets and being the bad person all the time. I figured if I could be that bright spot in someone’s day, then that’s all that mattered.”

“A false alarm gas leak turned into a full out play session in Mecklenburg Manor today!” Roper Boswell wrote on Facebook. “We definitely need more cops like him!!! Thanks for taking the time out to play with the kids.”

Joy Break: ‘God Made a Way’: Man With Cerebral Palsy Visits the Beach for the First Time

Joy Break: High School Graduate With Cerebral Palsy Surprises Everyone When She Walks Across the Stage to Get Her Diploma