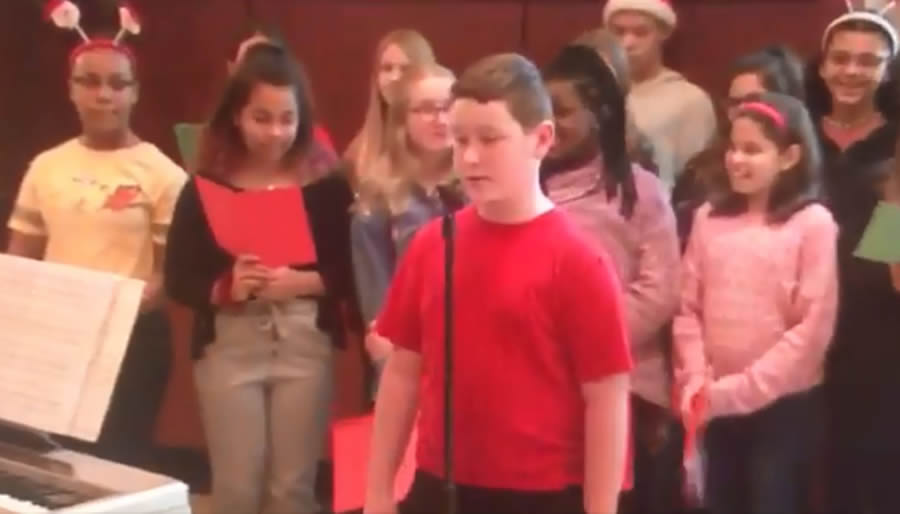 When we turn on our television or smart phones we are bombarded with news that brings us down. Where are all the good stories? They’re still there. Here are four Christmas caroling stories that we hope will bless you.

An 11-year-old boy got an early Christmas present Wednesday while at school.

Mark DiTizio’s class at Oak Valley Elementary in Deptford Township, New Jersey, was getting ready to perform Christmas carols at a senior center in Woodbury, reported CBS 3. Each student approached a microphone and told the audience what they wanted for Christmas. When it was Mark’s turn, he said that all he wanted for Christmas was to see his brother, Private Second Class Eric Shaw. As Mark walked away, he heard his brother say, “I am here.” Mark spun around and broke down in tears as his brother scooped him up and held him.

“For weeks my parents have been asking, ‘What do you want for Christmas?’ And I kept saying each and every single time, ‘I want to see my brother,’” said Mark. “Until a day ago they said, ‘So you are sticking to your word?’ And I said ‘Yes.’ And today he’s here.”

Eric has been in the military for about seven months. This is the first time he’s been home. “It means the world,” said Eric. “Family is everything. I mean happiness and family is the reason to wake up in the morning and it’s an amazing feeling. I’m trying to get used to it again. I’m still trying to realize I’m home.” Eric will spend a little over two weeks at home before he returns to finish his military training.

Students from Pittsburgh Creative and Performing Arts magnet school sang Christmas carols along with police officers Wednesday morning, reported CBS 2. A tweet from Pittsburgh Bureau of Police said that the CAPA Vocal Department students and the officers belted out holiday tunes to help downtown commuters go “on their MERRY way.” The group stood out in the cold at Liberty Avenue and Sixth Street as they sang “Joy to the World” and other Christmas classics.

Pittsburgh Police and students from the CAPA Vocal Department helped get commuters on their MERRY way Downtown this morning. The students braved the cold to beautifully belt out carols. And the cops…well, they gave it their all too!
Happy Holidays everyone! pic.twitter.com/kwCnHQSkoD

Sick little ones at Riley Hospital for Children in Indianapolis, Indiana, received a musical treat Tuesday, reported CBS 4. As part of their annual caroling event at the hospital, the Colts players, cheerleaders and even the team mascot sing Christmas carols and bring presents to the kids. Offensive tackle Anthony Castonzo said the team wanted to share the Christmas spirit with the children. “Seeing the smile on the kids faces when they usually didn’t before its amazing,” Castonzo said.

The Colts’ caroling event started more than 10 years ago by team owner and CEO Jim Irsay.

A Camden County, New Jersey, family has been caroling for 40 years, the Courier Post reported earlier this month. December 1, 2019, Pat and George Norcross hosted the family’s long-standing caroling tradition at their home. Pat said it’s more about sharing time as a family than anything. “It’s not about the singing. It’s about being together. You call the evening ‘Christmas carols,’ but that’s not what it’s about.”

The event this year brought four generations of the Norcross family together for singing and hot chocolate. Pat’s favorite part? Watching the little ones enjoy the festivities.

“I could just sit and watch the little kids. I said to their moms, ‘Cherish this time. You don’t get it back.'”