After their 51-17 win Friday, BYU football players joined the Boise State team to pray on the field. 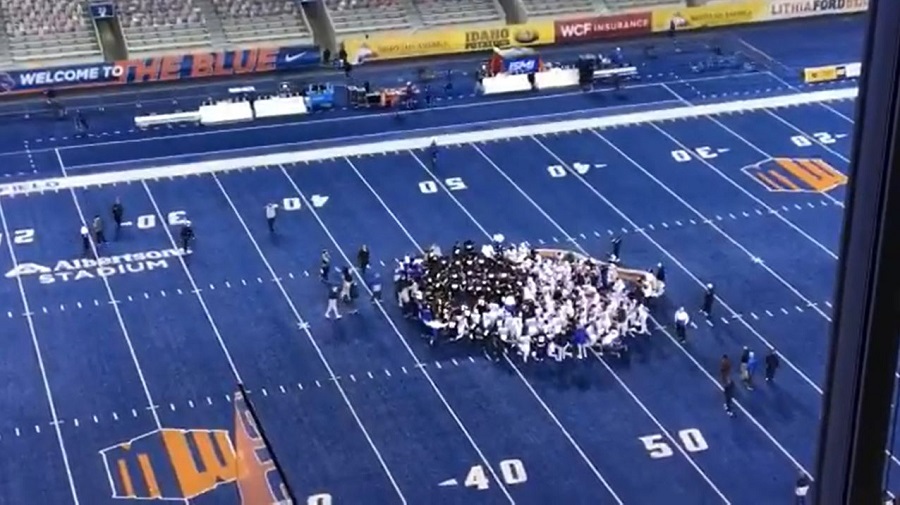 “We started with prayer, we’re going to end with prayer, and we’re going to give the glory to God,” Boise State team Chaplain Mark Thornton told Deseret News last week. It was after Friday’s game between nationally ranked BYU and Boise State. The Boise State Broncos pray before and after each game, reported the Deseret News. When he can, Thornton reaches out to opposing teams’ chaplains to invite them to pray midfield following the games.

Prayer on the Gridiron

On Friday, Thornton found the head coach for BYU. He told Coach Kalani Sitake that the Boise players were getting ready to pray. “Can we join you guys?” asked Sitake. Of course, Thornton said yes. Nearly the entire BYU team prayed with Boise State’s players. “I don’t know if an entire whole team has joined us before in the years that I’ve been here,” said Boise State co-captain Avery Williams. “That means a lot.”

‘We’re Not Going to Turn That Down’

Sitake told Deseret News that he wouldn’t have missed the prayer time. “We’re not going to turn that down, when a team invites our team to kneel down and praise God for the opportunity we had to play. What a great invite from them. I was really impressed with them the entire game, just a great program with wonderful sportsmanship and you know, hopefully we can be able to have that type of impact on other programs as well when we play them.”

“The fact that it’s such a big rivalry and we can be really physical with each other, compete really hard with each other and then drop our pride, drop our egos, drop what just happened for two to three hours and give thanks to God, that says something about both schools,” said Williams.

“Faith really unifies us,” Williams added. “We have this relationship with God, and we realize there’s something much bigger than ourselves that we all are all in for.”