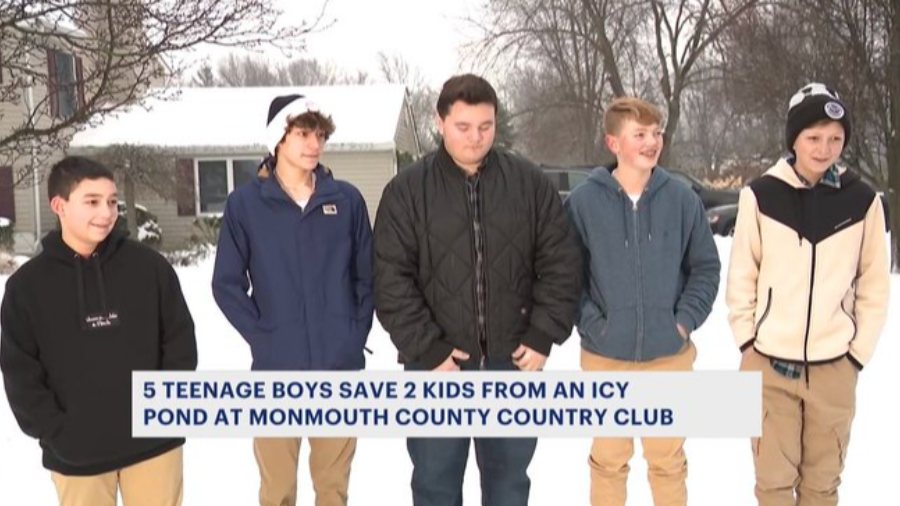 “We heard this Dad yelling, ‘Hop off, hop off!'” said Foley. “We turned around and see these kids coming down the hill. They were going backwards.”

Olivia Heid, 8, and her brother RJ, 4, were sledding down the hill on a blowup inner-tube when their sled hit a patch of ice near the bottom. According to Patch.com, the sled then ricocheted, shot over a snow bank, and slid over the pond before starting to sink.

“I didn’t see anyone else be able to do anything, so I just jumped in,” Foley said. “I was like, whatever. It wasn’t deep so I could walk right over to them. I picked them up and my friends formed a chain and we got the boy first, and handed him to my friends. Then I got the girl.”

The five boys rescued the children from the shallow pond. Foley lost his boots during the ordeal and finished the rescue barefoot.

Foley and Scalice are members of Middletown Boy Scouts Troop 47. Day works as a caddy at the country club and estimated that the pond was only a few feet deep. That wasn’t the problem Scalice said. “It wasn’t how deep it was. It was how cold.”

Olivia’s and RJ’s parents were thankful the boys were where they were when the kids’ sled went through the ice.

“We offered them money; they wouldn’t take it,” said mom Stephanie Irlbeck. “My husband took off his pants and gave Kieran his pants and his boots; thankfully, he took those. My husband shook all the boys’ hands and we wanted to give them a ride home, but they said no, their mom was coming to pick them up in half an hour. They were insanely humble. They didn’t want anything, they just wanted to make sure my kids were OK. They kept saying to my kids, ‘You’re safe now. You’re going to get a hot chocolate and a warm bath at home.'”

“We had to race to get the kids home because we didn’t want them to get hypothermia,” she continued. “I didn’t cry; I was just shaking. I felt like I was going to throw up the entire ride home.”

Irlbeck posted a note to a Middletown Facebook page to let the boys’ parents know they raised good kids. “In this day and age when kids don’t really care and all they do is take their phones out and videotape when something happens, these kids did not even hesitate,” she said. “I just wanted to call their parents and say, ‘you raised some really great kids.'”

“We’re just glad the kids are all right,” Dietrich said.