Brutally targeted during the Kavanaugh hearings, the author speaks up on a profession "cancerous with dishonor." 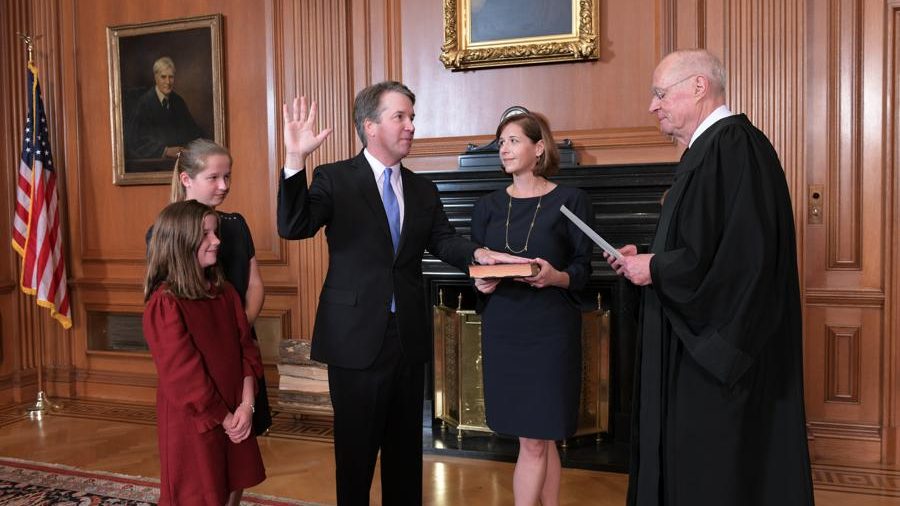 So a lifelong friend told me, a man who has spent his life in the military serving in places like Iraq and Afghanistan. We were talking about modern journalism, a profession that is cancerous with dishonor.

I have understood this since I broke away from liberalism in the early 1990s, but it became a radioactive reality in 2018 during the Brett Kavanaugh war. I was a part of that, you might recall. Kavanaugh, a nominee for the Supreme Court, stood accused of sexual assault in high school by California psychologist Christine Blasey-Ford. She claimed that I was in the room when the assault happened in 1982 (although the alleged year of the attack had changed in her story several times).

When the story broke, I was certainly bracing for the media to go crazy. More importantly, I knew that they were not going to act with honor. They were not going to heed that higher voice. It told them that in some eternal sense lying, exaggerating, and destroying people would violate a universal code. Even make them lose face to their peers. In his book Honor: A History, James Bowman argues that over the last 30 years, the old notion of honor itself has become “shameful.” Displays of “weakness,” such as “admittance of doubt and outpourings of emotion” have now become far more honorable, especially in politics. And there is no way to “lose face” with your journalistic peers when none of them have honor to begin with.

When Journalists Had a Sense of Honor

There are three events in journalism’s history that have always represented to me the profession at its best and most honorable:

Rolling Stone won the 1970 National Magazine Award for its coverage of the tragedy of the 1969 Altamont concert. The band the Rolling Stones had attempted to play a concert. But its decision to use the Hell’s Angels for security helped the event devolve into chaos and violence. Four people died, including a man stabbed to death at the foot of the stage. Rolling Stone’s reporting was accurate and devastatingly critical. Calling Altamont “rock & roll’s worst day,” a writer described the scene this way:

Flickering silhouettes of people trying to find warmth around the blazing track reminded one of the medieval paintings of tortured souls in the Dance of Death.

When the Facts Used to Matter

Fellow conservatives may disagree with me on this, but the Washington Post’s coverage of the Watergate scandal in the early 1970s was necessary — and honorable. I consider President Nixon to be an American hero for his support of anti-communist Whittaker Chambers in the late 1940s. But by the 1960s Nixon was doing things that were criminal. Nixon hated journalist Jack Anderson so much that he got the CIA to spy on the columnist and asked an aide to “stop Anderson at all costs.” Post reporters Carl Bernstein and Bob Woodward famously caught men spying on Nixon’s enemies and then the president’s aides trying to cover it up.

An illuminating contrast appears between the journalistic culture then and now. Recall how horrified Woodward and Bernstein were when they made a mistake. They’d reported on the front page of The Washington Post that a witness had given testimony to a grand jury about White House Chief of Staff H.R. Haldeman. This was wrong. “This was one of the real dreary days of our reporting life,” Woodward later recalled. “In fact, I don’t think I’ve had one that bad, because it was just flat-wrong.” The day the story appeared they had a meeting with a publisher. The reporters, according to NPR, had “a feeling of horror.” In other words, they felt ashamed. They felt dishonorable.

The same media that botched the Kavanaugh story feel no shame about ignoring the recent and much more verifiable sexual assault allegations against Joe Biden.

Such feelings have vanished. People have said that during the Kavanaugh war I avoided the press. That’s not true. I talked at length to the New York Times, telling them the truth. And that was that I had no recollection of the party Blasey-Ford described. I was not calling her or anybody else a liar, and I wasn’t going to speculate. I simply had no recollection of what she was talking about, just like the others she claimed were there.

Of course, that wasn’t enough. They had to go through my car, my yearbook, even an underground newspaper I put out in the early 1980s.

It was important to keep it not just honest but simple. I knew I was not dealing with Woodward and Bernstein. This became evident when Kimberly Strassel of the Wall Street Journal caught Washington Post reporter Emma Brown trying to aid Blasey-Ford. Brown hid the fact that Blasey-Ford’s very best friend denied her story. Unlike Woodward and Bernstein, Brown never needed for a moment to worry about her job. Nor did she express any shame.

In journalism’s current culture of dishonor, nobody ever has to. That’s why the mistakes made by the media during that entire battle could fill their own book. It’s also why the media feel no shame about ignoring the recent and much more verifiable sexual assault allegations against Joe Biden.

A Fierce Loyalty to the Truth

Finally, let’s remember Stephen Glass. In 1998, New Republic writer Stephen Glass was found guilty of simply making up many of his pieces. Glass’s fabulism was so blatant and widespread that even his liberal colleagues had to take action. But not until they were pushed.

In its best scene, the 1998 film Shattered Glass depicts the moment when new editor Charles Lane explodes at reporter Caitlin Avey, who has been defending Glass. Lane, the one honorable person left on staff, has to jackhammer through the liberal groupthink to find Avey’s conscience — and her sense of honor. “He handed us fiction after fiction and we printed them all as fact,” he says, “just because we found him entertaining.” Then he drops the bomb: “It’s indefensible. Don’t you know that?” [Profanity in clip]

For today’s reporters, the honest answer to that question is … “No.”

Mark Judge is a journalist and filmmaker whose writings have appeared in the Washington Post, the New York Times, the Wall Street Journal, and the Daily Caller.