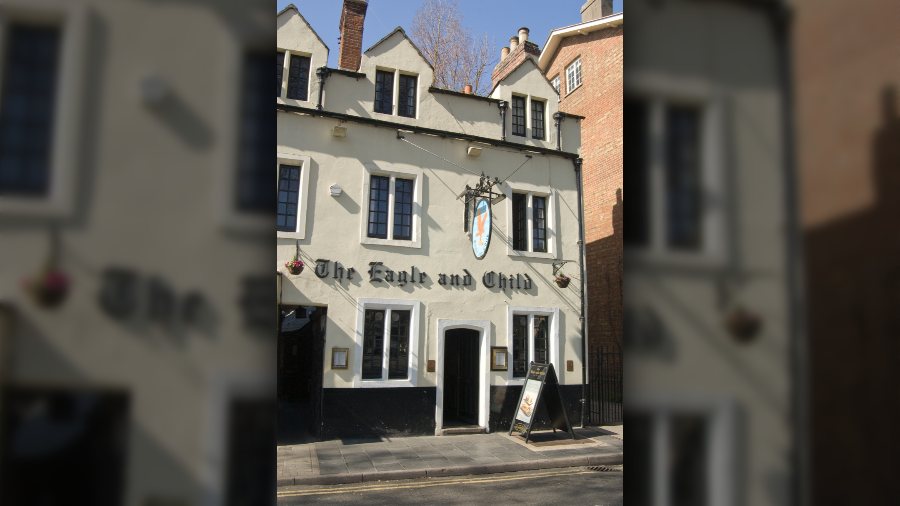 The Eagle and Child public house was used as a meeting place by famous authors J.R.R. Tolkien and C.S. Lewis.

The story goes that C.S. Lewis was walking through Oxford one fall evening in 1931 with fellow university professors J.R.R. Tolkien and Hugo Dyson. It would turn out to be one of the most significant evenings of the 20th century, for it was a catalytic event for the conversion of one of modernity’s greatest Christian apologists.

On this particular evening, Lewis was wrestling with the meaning of Christ’s life, death, and resurrection, and what those stories mean in the here-and-now. By this point, he had abandoned agnosticism for Theism, or the belief that there exists a god, even if he wasn’t sure who that god was.

Lewis loved myths and he believed they communicate important truths. But he could not yet take the final step to believe in one single myth — the Christian myth — as ultimate Truth.

“Myths are lies,” C.S. Lewis said, as recounted by Tolkien biographer Humphrey Carpenter, “even though lies breathed through silver.”

Tolkien wrestled through these ideas with his friend. As an avid lover of mythologies himself, and later the author of the 20th century’s most beloved trilogy, perhaps there was no mind better for Lewis to contend with than the Catholic mind of Tolkien.

Tolkien proposed to Lewis that Christianity was indeed a myth. But a myth that was true.

Tolkien proposed to Lewis that Christianity was indeed a myth. But a myth that was true. A myth that actually happened.

Twelve days later, C.S. Lewis wrote to a friend, “I have just passed on from believing in God to definitely believing in Christ — in Christianity. I will try to explain this another time. My long night talk with Dyson and Tolkien had a great deal to do with it.”

Last week, famed clinical psychologist and author Jordan Peterson posted a new podcast, featuring guest Jonathan Pageau, an Eastern Orthodox iconographer. The two have shared friendship since years ago when Peterson brought Pageau along on some of his lectures, impressed by Pageau’s work in the symbology of reality.

Peterson has recently returned to public life after two years of health crises involving his wife’s deadly cancer diagnosis followed by her miraculous recovery, and his own severe reactions to a dependency on anti-anxiety medications prescribed to him by his doctor. His recovery has been slow, and he reports that he is still in regular pain.

The podcast is profound — an intimate and raw conversation between a devout Christian and a suffering soul wrestling with the reality of God and the myths and symbols of Christianity.

It struck me, halfway through the conversation, how alike it sounds to that late-night walk embarked on by Lewis, Tolkien, and Dyson. Lewis and Peterson share many similarities. Perhaps the most significant is that like Lewis before his conversion, Peterson firmly believes in the goodness of myth, but he has yet to take the step to say, “This myth is true.”

For an extended portion of the interview, Peterson and Pageau discuss who Christ is. After wrestling with the figure of Christ for several minutes, Peterson tells Pageau that in Christ, you have “an actual person who actually lived plus a myth.”

“The problem is, is I probably believe that,” Peterson says, “but I’m amazed at my own belief, and I don’t understand it.” Here, Peterson becomes emotional, swallowing back tears: “Because I’ve seen — sometimes, the objective world and the narrative world touch.”

Sometimes myth enters reality and becomes real. Sometimes a Greater Reality breaks through into our own lesser reality.

Watching the interview is to watch a man sincerely trying to make sense of Christianity and what it means to him personally. He acknowledges that if it’s real — if Christianity is indeed true — then it would change everything.

Where would Lewis be without Tolkien? As Peterson wrestles through these ideas, Pageau sits with him as a friend. He smiles, nods in understanding, and even gives regular empathetic chuckles, as a professor who knows the answers enjoys watching a student reach truth himself.

Pageau listens as Peterson asks the hard and ugly questions. How is he to reconcile his pain with the Christian God? How is he to embrace the same belief supposedly espoused by villainous Catholic priests engaging in sexual abuse? Sometimes Pageau doesn’t embark on a response — a brave withholding of pat answers — but he does provide enlightenment where he can.

In one beautiful moment, Tolkien shines through Pageau. He explains just how complex the world and our understanding of it is. He talks about attention, and how what we pay attention to matters. “This capacity we have to attend,” he says, “is something like a co-creation of the world.”

Any fan of Tolkien should be struck by that word co-creation. Tolkien called man a “sub-creator,” made in the image of the One Creator to participate in smaller acts of creation in our own world. “…man, sub-creator, the refracted light,” as Tolkien writes in Mythopoeia.

On the Cusp of Truth

I believe God is knocking on Jordan Peterson’s door. I believe He has been for a long while. In a dream recounted in his 2018 book 12 Rules for Life, Peterson found himself “many stories above the ground, directly under the dome of a massive cathedral,” the point of a cathedral that architecturally represents “the centre of the cross.”

In another dream, Peterson watched as the greatest heroes of history bowed down to Christ.

Whereas in the past Peterson has explained Christ psychologically, now it appears he is wrestling with Him as a figure who may truly be who He claimed to be: God incarnate, a myth made real.

May he, like Lewis, take that final step to embrace the one true myth. Who knows what could happen? At the very least, Peterson could find that peace “which passeth all understanding” for which every human soul desperately longs.

Caitlin Bassett is a writer for Mind Matters News, and the Assistant to the Managing and Associate Directors at Discovery Institute’s Center for Science & Culture. Her interests are in political philosophy and current events. She graduated from Liberty University in 2017 with her bachelor’s in politics and policy.