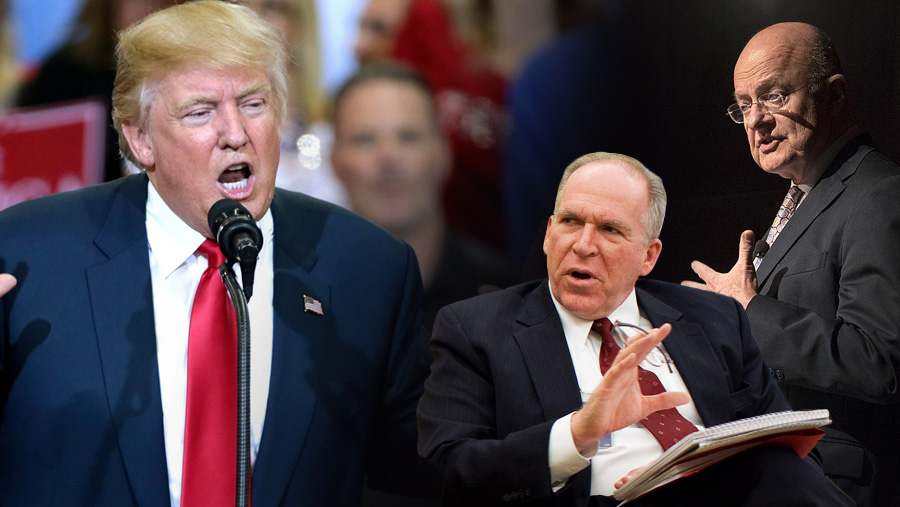 US Attorney John Durham has requested an interview with former CIA Director John Brennan. Durham also wants to question former Director of National Intelligence James Clapper. According to the Washington Examiner, Durham also has his eyeballs on former FBI counter-terrorism honcho Peter Strzok. And on British spy Christopher Steele. These would be the four Riders of the Russian Collusion Apocalypse.

A sure sign Durham has indeed demanded a sit down from the former top spooks? Politico ran an article Tuesday that may have well come out of Brennan’s mouth. The hit piece was all about President Trump’s “obsession” with Brennan and “quest for vengeance.”

The author … or shall I say transcriber … actually managed to erase history. Of course he neglected to mention Brennan’s continual, emotional, unprecedented assaults on the president. But he went further, and denied a matter of public record: That Brennan flat out lied to Congress about his agency spying on Senate staffers. And as Victor David Hanson points out, Brennan lied to Congress on several other occasions.

What exactly did Obama know?

For that matter, Clapper has also admitted to lying to Congress.

Durham was tasked by Attorney General William Barr to investigate the origins of the Trump-Russia investigation. Or as Strzok called it, the “insurance policy.” Another term would be the anti-Trump “black op.” Arguably, “seditious conspiracy.” You may prefer “coup attempt.”

In an up-and-up situation, determining an investigation’s origins would take all of five minutes. However, as Barr said a few months back, the more questions he asked, the more questions he had. The answers did not match the public record. The official stories about the origins of the spying on the Trump campaign fell apart quicker than the Redskins season. Barr’s been around the Swamp long enough to recognize the smell of rats. Now Fox News reports, Durham has expanded his investigation based on evidence he and Barr uncovered in Rome.

We learned last week that Durham got hold of two Blackberries belong to Maltese professor Joseph Misfud. The official line from Mueller, FBI and their media cohorts? That Misfud was a Russian asset. (Then again, according to Hillary Clinton, who isn’t?). However, far more evidence suggests Misfud is a Western intelligence asset. In other words, Misfud was involved in setting up young Trump campaign worker George Papadapoulos on behalf of Trump’s enemies in DC. The phones could provide the proof.

It’s no coincidence the Democrats went nuts for impeachment the minute they learned that the truth might out. That Attorney General Barr and Durham were visiting countries like Italy (which protected Misfud). And Australia (which provided Ambassador Alexander Downer). And Ukraine (which provided dirt on Paul Manafort at the Obama administration’s request).

We know about the Blackberries because of Lt. General Michael Flynn’s new attorney Sidney Powell. She wants the data from them, believing Misfud knows about the efforts to frame Flynn going back as early as 2014.

The New York Times’ farcical notion that the “Deep State” consists of honorable patriots saving the republic is downright laughable.

For the record, Donald Trump at that time was still hosting The Apprentice. So the New York Times‘ farcical notion that the “Deep State” consists of honorable patriots saving the republic is downright pitiful. The same gang, including Stefan Halper, went after General Flynn.

Yet, Brennan and Clapper have a bigger problem. Bigger than the origins of the Collusion counter-intelligence against Trump. Durham has reportedly expanded his investigation timeline past the creation of the Mueller Special Counsel. Meaning, the dubious origins of the Special Counsel. And the schemes of government officials after the election of President Trump.

This means not only the spying, not only the enlisting of foreign governments and agents to help undermine Trump, but also such things as:

The next day, Comey runs up to Trump Tower to brief Trump on the “salacious details” of the Steele Dossier. He conveniently leaves out what he already knows: The dossier is bogus. Unverified. The work of a Trump-hating former British spy. That Hillary Clinton paid for it. You know, the information that would allow Trump and his allies to squash the Dossier Frenzy in its infancy.

What Did Obama Know and When Did He Know It?

In Susan Rice’s CYA email to herself Inauguration Day, she quotes Obama twice as saying he wanted things “done by the book.” Putting aside that nobody outside of TV detective shows says that, Obama did not say which book. It certainly wasn’t one containing the U.S. Constitution or the phrase “peaceful transition of power.” A better bet? Saul Alinsky’s Rules for Radicals.

What exactly did Obama know? If he didn’t know the dossier was bogus, and that Comey didn’t tell the president-elect everything pertinent about it, that foreign intelligence assets were being used against a political opponent — against his successor in the highest office in the land — why isn’t he yelling bloody murder?

Oh, but he did know. He did know. As Lisa Page famously texted “POTUS wants to know everything we are doing.”

Questions for Brennan and Clapper

So sometime soon John Durham is going to put John Brennan and James Clapper on the hot seat. That’s presuming he can pry them off the sets of MSNBC and CNN. The questions for these two are legion. I have a few of my own to add.