On the Mustache That Roared. 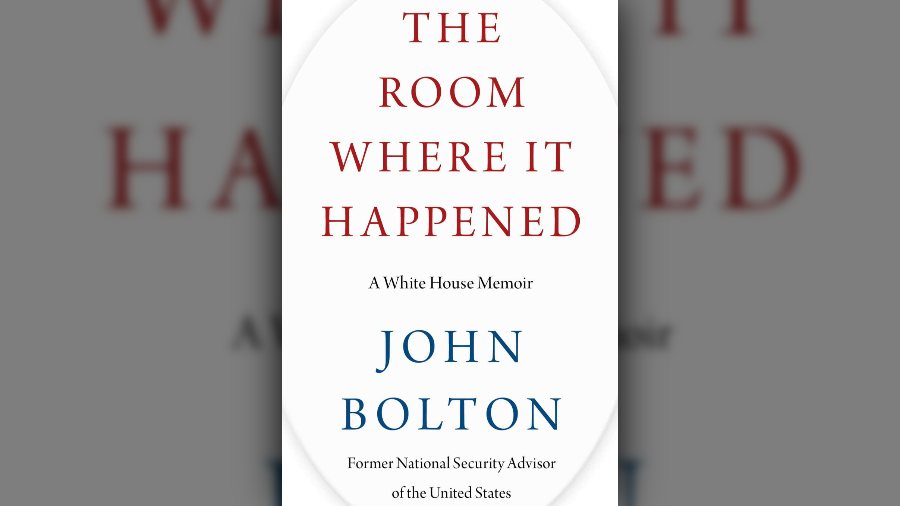 President Harry S. Truman famously and fabulously said, “If you want a friend in Washington, get a dog.” However, even Truman would quail at what former National Security Advisor John Bolton just did to President Trump … in fact, the presidency itself and the nation.

Sure, we’ve hatched a Swamp tradition in recent years. People leave an administration and immediately pen a book. (His is titled The Room Where It Happened. Subtitled “A Hissy Fit After Being Fired”. Okay, I made that up.)  Who can forget President Clinton’s domestic policy advisor George Stephanapoulos writing a book declaring what a nightmare Hillary Clinton could be. (Bill Clinton’s Press Secretary Dee Dee Meyers did the same.) Or how about President Obama’s Defense Secretary Bob Gates stating in his book that Vice President Joe Biden had been “wrong on every major foreign policy issue in 40 years”?

So many have traded their White House security pass for a book deal. In the Trump era, it seems part of the exit package.

Thus in one sense, we can understand Bolton grabbing his 30 pieces of silver and 15 more minutes of fame by writing a tell-all about his time with Trump. And it is a chuckle watching the media, which absolutely loathed Bolton, fawning all over him like Leo DiCaprio circa 1997. And we laugh as we imagine Bolton teaming with Omarosa in hosting an anti-Trump cruise to the Caribbean. Or Venezuela, which becomes the model for our nation if Biden wins.

Which gets to our first  point: Is the payoff … or payback … worth the risk of wrecking his country?

Bolton Betraying His Own Beliefs

John Bolton’s entire career has been focused on pushing to protect the nation, and doing so with a heavy fist. He’s such a hawk his portrait hangs at the Audubon Society. He makes John Rambo look like Jane Eyre.

Bolton and his mustache were regulars on Greg Gutfeld’s old Red Eye program on Fox News. In fact, he was Red Eye’s “Honorary President.” Even at 3 a.m. Eastern, Bolton was pushing for a strong, muscular America, and lambasting those who he saw as making us weaker.

And yet today, Bolton is peddling a book that is fodder for those who’d do us harm. Those he for years detested and fought against. And I don’t just mean the mainstream media and liberals. He is publishing national security secrets and inside information. Stuff that could be used by Russia, China, Iran and other rival nations.

The Department of Justice filed a lawsuit Tuesday to block publication of the book. In the lawsuit, the National Security Council, which has a right to review a manuscript of Bolton’s book, says it all. It has “determined that the manuscript in its present form contains certain passages — some up to several paragraphs in length — that contain classified national security information.” The NSC argues publication of the book

would cause irreparable harm, because the disclosure of instances of classified information in the manuscript reasonably could be expected to cause serious damage, or exceptionally grave damage, to the national security of the United States.

Bolton and his publishers are talking a lot about “transparency.” (Trump is the most transparent president we’ve ever had. To a fault. Truman would write attacks that would make Trump blush, but Truman would crumple up his insults and toss them in the trash.)

Yet the adage is true, “loose lips sink ships.”  You don’t want to give your enemies anything they can use against you. You want to control what information they have about what’s on your mind.  Don Corleone knew it, “Never let anyone outside the family know what you’re thinking.” Bolton knew it. And yet he writes intimate details about a sitting president and his thoughts. In the middle of a global pandemic. When North Korea is suddenly acting belligerent and Kim Jong Un is nowhere to be found. When two massive nuclear powers, China and India are killing each others’ soldiers along their disputed border.

Man, is getting on CNN and getting into Georgetown cocktail parties really worth it?

Does he want to see the nation mired in another bogus impeachment inquiry? Keeping Republicans off the campaign trail? With Congress again taking its eye off the ball? The last time they did, they missed the encroaching COVID-19 crisis and 117,000 Americans died as a result. Is Bolton hoping for a summer sequel? As sure as Trump’s hair is orange, Democrats will pore over every line looking for something they can turn into another “investigation” that will lead to another “impeachment.”

Bolton must. He must know that even if he has 591 pages touting the need for a strong, conservative America, even one page blasting Trump will be the only thing that will be covered. Bolton’s book is a Father’s Day gift for the Democrats. A boot to the stomach to the Republicans from the top of the ticket on down.

Bolton Betraying the Office of the Presidency

But let’s forget the election for a second. Let’s forget the world stage. Let’s even put aside President Trump. Every president, every leader, every boss, has to trust those advising him or her. They have to know that their doubts and desires, brainstorms and even bloviating aren’t going beyond the room. Every creative mind is going to have some clunkers. You cannot safely think aloud if you have to worry your thoughts are going to land on the front page of The New York Times. Your flashes of irritation will be on CNN. That what you said as a joke at a midnight meeting will be taken as a serious statement on a Sunday morning program.

Your effectiveness is compromised. Your mission is jeopardized.

National Security Adviser for the President of the United States is one of the most solemn and serious jobs on the planet. No conversation involving a president and his or her National Security Adviser can have strings. The President cannot be thinking, “How is this going to look if it gets out?” The NSA can’t be thinking, “How is this conversation going to look in my book?”

Bolton’s book, if it is allowed to be published, will be here and gone. The pre-sales are strong. And sure, those with TDS will gobble it up like a teen boy swiping a Playboy magazine. But is it going to be on anyone’s summer reading list? Nah.

Besides, at the end of the day, “I heard Trump say some curious things and lots of us mocked him behind his back” isn’t exactly a revelation. (It’s not even unique. Lincoln’s advisors had similar thoughts and experiences with their rube outsider from the backwoods. They just had the honor to not blab about it publicly for money. In the midst of a nation in crisis.) And that Bolton wanting more aggressive action against our foes is like Michael Moore wanting more meats at a barbecue.

Also, as the Washington Post review of his 2008 book Surrender is Not an Option reminds us, Bolton happily admits he deliberately undermined his former State Department boss Colin Powell. “He knew it,” Bolton wrote, “and he knew I knew it.” So undermining bosses is nothing new for Bolton. Neither is lying, as he admitted on Fox in 2010.

So Bolton will spend the summer as the Democrats’ favorite pet.

To paraphrase the great Mr. Truman, “If you want power in Washington, get a rat.”