Joe Biden Went Down to the Crossroads. It Seems. 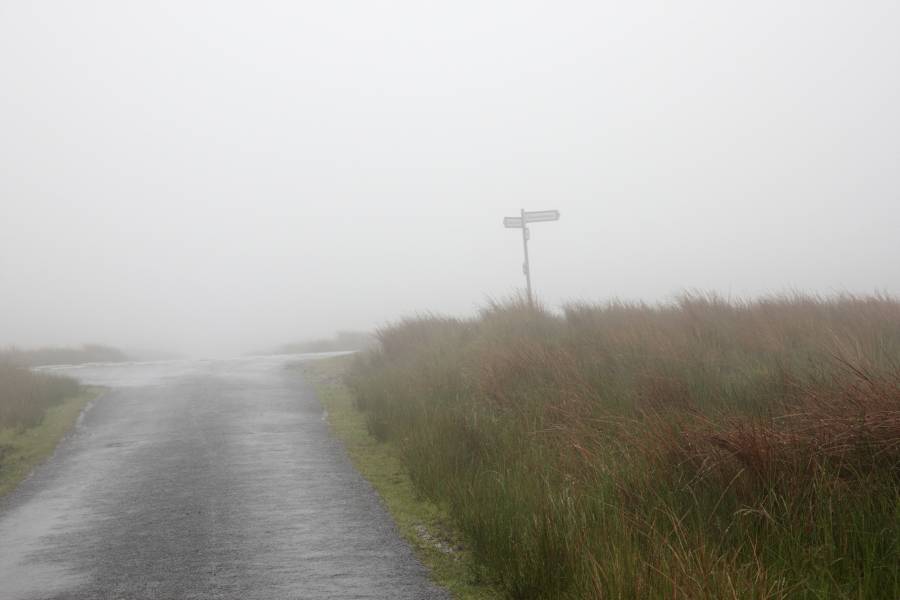 A story is told of the King of the Delta Blues. Seems Robert Johnson wasn’t always a king of the blues. In fact, old timers insisted Johnson, when he first came around, was a mediocre musician at best. Then he disappeared for a year. When he returned, he wrote and sang and played the blues at a level and an other-worldly dimension never heard before and unmatched since.

Robert Johnson, legend holds, was desperate to be the best bluesman ever. He’d do anything. Young Robert was advised to take his guitar down to a crossroads near Dockery Plantation in Clarksdale, Mississippi, at midnight. The intersection of Highways 49 and 61. There, at the Crossroads, when the clock struck twelve, he met the devil and cut a deal: His soul for blues greatness and music immortality.

He got it. Death claimed him a couple short years later.

Like Johnson (in the story), Joe Biden was a mediocre talent desperate to be tops.

The first two times Joe came around he had been a miserable candidate. His 1988 bid blew up amid proof of plagiarism, and lack of voter interest. His 2008 bid was an abject failure. Biden was not able to earn a single delegate against a freshman senator with ties to terrorists and a woman with more baggage than Taylor Swift on a world tour.

The third time in this election cycle was no charm. He came in fifth in Iowa. He did so poorly in New Hampshire he didn’t stick around for a concession speech. Bernie Sanders was looking strong. Elizabeth Warren was on the move. Even a gay small town mayor was eating his lunch. Biden’s political obituary was being written.

And yet, for some unearthly reason, despite not doing anything memorable, saying anything remarkable, or his foes doing anything self-destructive … despite having muffed and gaffed and misled his way across the early primary states … Joe Biden went in a manner of weeks from being finished to being the de facto nominee.

You can talk about how the DNC freaked out at the prospect of open socialist Bernie Sanders at the top of the ticket. So it pressured Pete Buttigieg and Amy Klubachar to drop out … but not Elizabeth Warren, who could siphon off Sanders votes. These moves cleared the way for Biden’s Super Tuesday wins. You can talk about how COVID then froze the primaries, keeping Biden from head-to-head debates and public appearances, and helping lock in Biden’s nomination.

You can talk politics all day. But it still doesn’t fully explain how he went from nowhere to nominee.

I can’t help but wonder if Joe Biden’s been down to the Crossroads, sold his soul to Ol’ Scratch for a nomination he never ever could earn on his own.

Shuffling to the Crossroads

Can you imagine the scene?

Biden was a desperate man. His mental facilities waning, his dream of the presidency dashed. He headed south from New Hampshire with nothing left and nothing left to lose.

Upon arriving in the south, as the clock struck twelve, Biden shuffled out from his hotel, into the night. A crossroads emerged out of the fog. A tall, thin, ever-so-cool figure with the oversized ears stood waiting. He’d enjoyed mocking Joe in the past, tempting him, then switching the bait. Keeping him dangling.

But this was time for business. Old Scratch couldn’t see more power slip in to the hand of his enemy. No, not Trump. God. Even the return of saying “Merry Christmas,” made him bristle in fury.

Biden was eager, willing to do or say whatever he was told to grab in his rickety hand, if only for a moment, the brass ring.

Ol’ Scratch laid out his terms: In return for political glory, Joe Biden must sacrifice his political soul. He must:

… reject the teaching of his God and church, and fully allow the murder of innocent unborn.

… abandon his lifelong support of the Hyde Amendment that prohibits the federal funding of abortion. Ol’ Scratch’s partner Moloch must feed at the public trough.

… pick as his running mate a vehement pro-abortion radical. Someone who actually prosecuted journalists who exposed the abortion industry’s baby party selling racket would be an extra bonus.

… choose her not on merit, but skin tone and sex alone. Identity politics is the devil’s playground.

… secure as his policy partners socialists Bernie Sanders and AOC, and embrace all the godless socialism that comes with it.

… embrace the Green New Deal, with all its Gaia-worshiping, America wrecking implications.

… reject his once-sane views on immigration in favor of open borders and American taxpayers paying for the health insurance of illegal immigrants.

… sow racial division by insisting those blacks who don’t embrace him or the socialism and anarchy of the left “aren’t really black.”

… declare that police have become the enemy.

… align with an anarchist terrorist organization hellbent on bringing destruction to American cities.

… pledge allegiance to a violent, Marxist, anti-Semitic, anti-capitalist organization. One that despises and aims to destroy the nuclear family. (In other words, do the very thing that has brought such misery to the black community. Oh, how Scratch loves destroying families!)

“Take out the black homes,” Ol’ Scratch says with a smirk, “I’ll give you the White House.”

Above all, when the fires were lit, when the enemy came to kill, steal and destroy, Joe Biden must keep mum. He must keep mum for months as people die, as businesses burn, as police are blinded and shot and federal buildings are bombed, as American heroes are toppled, defaced and defamed. As elderly supporters of his opponent are brutalized in the street. As supporters — including children — are shot at. As black children are murdered by rioters. (#HerNameIsSecorieaTurner.)

Ol’ Scratch did add a caveat. If Joe’s chances to win start fading, he must at all costs refuse to hold to account the demons running the streets. Instead, he must climb from his basement and attribute the violence to … his opponent. He must not name the true perpetrators. He must blame the victims.

And he must warn that unless he is elected, the killing, stealing and destroying will continue. The devil’s show will have its long run.

The Deal is Signed and the Devil Delivers

With pen in his frail, shaky hands, Joe Biden signed the contract. He would stay silent as murder ran in the streets, and flames climbed to the sky. He would wink at those committed to America’s destruction. He would have his staffers pay to bail out domestic terrorists. He would claim for himself positions he long rejected. He would renounce his own church’s clear teachings.

“For this,” said Ol’ Scratch, “I will now hand you the Democratic Nomination.”

Biden has honored his side of the deal.

Falling Down on His Knees

As Robert Johnson became the King of the Delta Blues, Joe Biden may well become the President of the United States.

Johnson returned to the Crossroads, this time to be delivered. He sings in his immortal “Cross Road Blues”:

While we can pray Joe Biden will fall to his knees, we know we need to fall down on our knees at this crossroads in American history. “Have Mercy, now, save America if you please.” 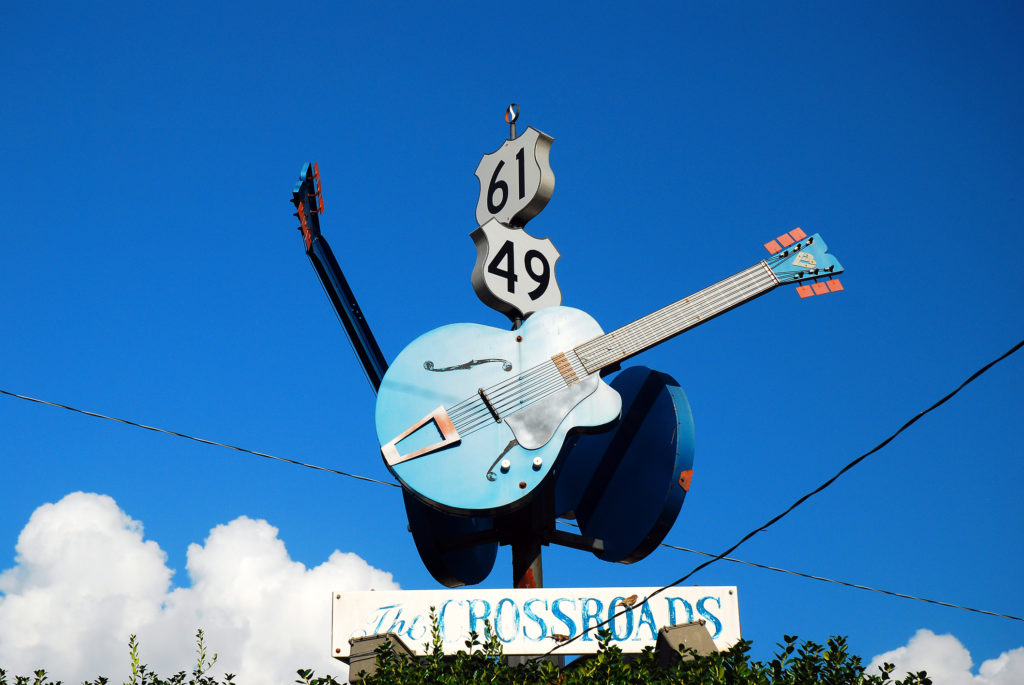 Clarksdale, MS, USA July 20, 2010 The legendary Crossroads,the intersection of Routes 49 and 61 in Clarksdale, Mississippi, was made famous by blues and rock musicians.