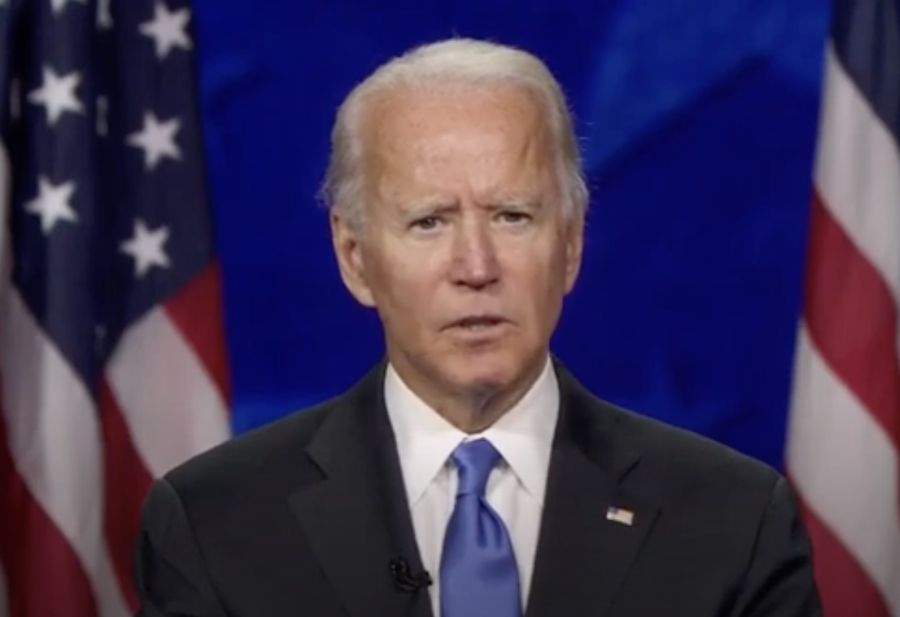 Former Vice President Joe Biden’s dentures did not fall out as he accepted the Democratic nomination Thursday night. And for that, his speech is being hailed as the greatest in his life.

Yes, it was emotional and personal. Joe’s an emotional guy. And he’s been through some things, even if he has a habit of fudging the details. He spoke for 25 minutes. That’s the shortest acceptance speech (by far) since George McGovern in 1972. (By comparison, both Hillary Clinton and Donald Trump spoke for about an hour in 2016.)

Biden looked and sounded like an actor from the golden age of movies honored in the twilight with a lifetime Oscar, commanding the Academy stage one last time. Thanking his family and those who helped him along the way, choking up at mention of those lost, offering a passionate plea for unity and light.

And yet, there was also, toward the end, a rage. An anger that jumped out as if turned on by a switch. (I’ve seen it before, in a beloved pastor of a similar age, in scenes still painful.)

There was also a moment so heinous, so galling, so repulsive that it’s easy to lose all sympathy for the frail and fading player. Joe Biden repeated the disgusting Charlottesville lie about Donald Trump. He made that Trump saying there were “very fine people on both sides” referred to the white supremacists who marched in Charlottesville. That is a flat out lie. As this PragerU video proves, Trump condemned the Nazis and white supremacists. His remark clearly referred to other people. And yet Biden repeats what is probably the closest thing we have to a blood libel in America. And he dare speaks of unity and healing.

What’s more, Biden claims the statement is what made him run. Said Joe, “it (Trump calling White Supremacists ‘very fine people’) was a wake up call for us as a country and for me, a call to action. At that moment, I knew I had to run.” Tragic, if true, that he’s running on the basis of a media hoax. Pathetic, if true, that it’s yet another Biden biographical fantasy.

Joe wasn’t going to talk much about policy. Because the radical policies he’s been forced to embrace couldn’t even sell on eBay. So he raced through a vague list that had little to do with his compact with socialist Bernie Sanders. Joe talked about how he’d defeat COVID-19. (Basically, doing everything Trump’s already done or doing.) He blamed Trump for America’s COVID deaths and employment loss from the shutdown.

Remember when I spoke of Biden turning to rage? This was when he declared that he would not coddle dictators or let foreign governments interfere in our elections. Thank God there wasn’t a convention crowd or he would have melted their styrofoam hats.

Unfortunately, it was his Obama/Biden administration that cuddled with Castro, bowed before China, let Kim Jong Un advance their nuke and missile programs, gave Putin his dream of global uranium domination, and loaded terrorist Iran with billions of dollars and a path to a nuke.

And when it comes to election interference, he apparently forgot that if Russia messed in any way in the 2016 election, it was on his watch.

Biden effectively celebrated the one word that describes America, “possibilities.” He raved that in America, anything can be accomplished. “This is the United States of America!” Nice. All that was missing was the “C’mon, man!”

But then you consider the streets, see all those rioters and protesters — and DNC speakers — condemning America, tearing down her heroes, openly wanting to tear down its economic and political systems. Joe had no words for them.

Joe spoke in spiritual terms. Joe Biden promises to lift America out of its “darkness.” Except the darkness the sane among us see is the side-winding kick to the head of an innocent man, the burned out black businesses, the lusty calls for abortion even if a child is born alive. A Netflix film sexualizing 11-year-olds. (Biden’s VP runner up Susan Rice is on the board of Netflix. Biden’s old boss Obama is getting a pirate’s treasure from the entertainment giant.)

Joe spoke of bringing light. Perhaps he meant the blinding laser lights Antifa is shining in the eyes of peace officers. Or the flames from churches and courthouses set ablaze … without comment or condemnation.

Joe used a phrase used a lot this week by the Democratic speakers. He promised to restore the “soul of the nation.” Does he mean a love of liberty? No. He’s got Beto set to take guns. He’s got Google and YouTube and Twitter and Facebook targeting non-progressive ideas and conservative thinkers. Does he mean “E pluribus Unum” … “From the many one”? No, not when he’s pandering to specific splices of the American Pie?

Freedom of Religion? No, not when he’s happy with churches being shut and picked as his Vice President a woman who made clear she thinks people of traditional faith (like a member of the Knights of Columbus) makes them unfit to  serve.

Freedom of the Press? Not when this same VP nominee jails journalists who expose the criminal deeds of her friends.

Perhaps by “soul of the nation” he means the American notion that all are created equal. That we judge each other not by the color of our skin but by the content of our character.  Except try saying “All Lives Matter” in Joe Biden’s America. And try imaging Biden picking Kamala Harris if her skin were white.

Joe ended by saying, “God bless you” and “God bless our troops.” He left out God blessing America.

Jill Biden came out for a hug and kiss. The two went to a huge screen displaying numerous feeds of people cheering him on. Wisely, the DNC didn’t double up images as had been done the night before. Oddly, for Joe, the screen was not full.

Kamala Harris and her husband came out, and they waved at the screen stage right.

The two couples crossed towards each other. Joe did a fist-pumping motion toward Harris … and then passed right by her like she was a panhandler in downtown Wilmington. Harris was left standing there, clearly expecting something more, actually reaching toward him. But Joe was long gone.

She retreated to the other side of the stage, a bit more waving with her husband, and the couples both exited. There was not a single moment when the presidential nominee and VP nominee were together, in front of the camera, inside the venue. No moment when the two were side-by-side waving at the screens semi-full of supporters.

They did go outside, fully masked, and for one brief second the two couples held their hands high, with Joe and Kamala in the center. But even then no shot of just the two.

What good’s a ticket already ripped in half.

We began with the image of the aged actor taking a bow accepting an honorary Oscar at the end of a half-century long career.  We’re glad this longtime actor on the political stage gave a coherent, emotional speech. But would you hire him to star in a four-year long action-packed thriller?

Here’s a transcript of Joe Biden’s speech accepting the Democratic nomination for president.