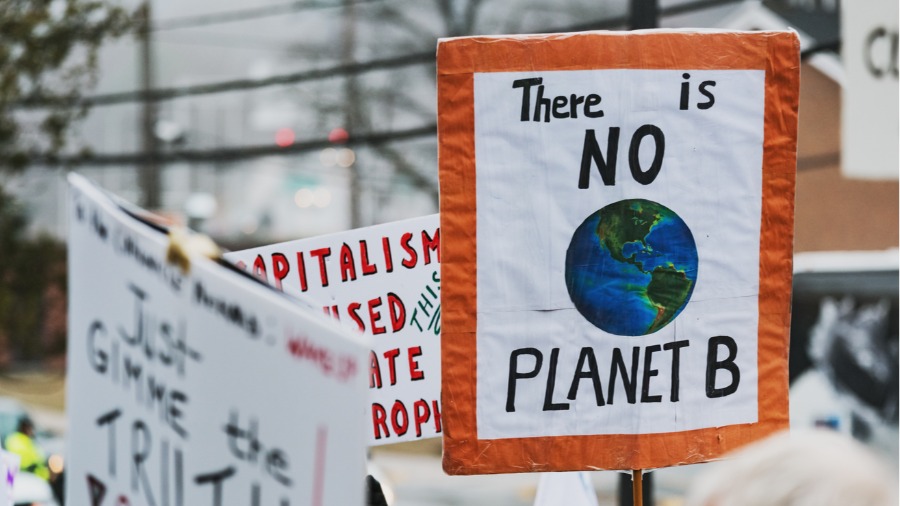 Jim Wallis’s far-Left Sojourners is at it again. This time it’s calling for Christians to join in “the largest climate demonstration in human history” on September 20.

Writing for Sojourners and Young Evangelicals for Climate Action, Melody Zhang, Matthew Groves, and Tori Goebel sent out an email September 12. It said, “Christians must play a critical role in the movement, providing the moral leadership to call for bold action.”

Why? They offer two reasons.

First, because “Genesis is clear that we have been entrusted by God with the keeping of all God’s creatures and the earth itself.” “When we pollute the atmosphere with greenhouse gases, or rely on oil that leaks and destroys life in the Gulf of Mexico, or allow mountaintop removal and fracking that devastates local water sources, we are not being responsible stewards of God’s earth.”

Second, because “Christians are called to climate action on behalf of caring for the other people,” “the least of these.” “Today, entire island nations like Kiribati are threatened by sea level rise and could disappear, hurricanes regularly upend life in Puerto Rico and the Bahamas, and asthma rates keep rising in black communities.” Further, “Global patterns of disparity compound this: Communities in the Global South are on the frontlines of climate change, hit first and worst, even though they have done the least to cause climate change.”

But wait. How reasonable is all this? Or is it mere hyperventilating?

Let’s walk through all those claims.

What Do These Things Have to Do with Global Warming?

The demonstration next Friday is supposed to be to call the world to fight “climate change.” That means human-induced global warming.

What, pray tell, do fish and wildlife kills by oil spills in the Gulf of Mexico have to do with global warming? What do water contamination by mountaintop removal or fracking have to do with it?

If those are problems — and they are, though they’re also generally exaggerated — why not address them directly, not by addressing climate change, to which their connection is tenuous?

Okay, but what about island nations threatened by sea-level rise? Two experts, Albert Parker and Clifford Ollier, recently published an article in the journal Quaestiones Geographicae. In the abstract they wrote:

Over the past decades, detailed surveys of the Pacific Ocean atoll islands show no sign of drowning because of accelerated sea-level rise. Data reveal that no atoll lost land area, 88.6% of islands were either stable or increased in area, and only 11.4% of islands contracted. The Pacific Atolls are not being inundated because the sea level is rising much less than was thought. The average relative rate of rise and acceleration of the 29 long-term-trend (LTT) tide gauges of Japan, Oceania and West Coast of North America, are both negative, −0.02139 mm yr−1 and −0.00007 mm yr−2 respectively. [I.e., sea level there is falling.—ECB] Since the start of the 1900s, the sea levels of the Pacific Ocean have been remarkably stable.

That’s not news, though. Three years ago Parker published another article in which he reported:

The sea levels of Kiribati have been stable over the last few decades, as elsewhere in the world. The Australian government funded Pacific Sea Level Monitoring (PSLM) project has adjusted sea level records to produce an unrealistic rising trend. Some information has been hidden or neglected, especially from sources of different management. The measured monthly average mean sea levels suffer from [land] subsidence or manipulation resulting in a tilting from the about 0 (zero) mm/year of nearby tide gauges to 4 (four) mm/year over the same short time window. Real environmental problems are driven by the increasing local population leading to troubles including scarcity of water, localized sinking and localized erosion.

The reality is that Kiribati is growing, not shrinking.

All right, but there are the hurricanes, right?

Yes, there are the hurricanes. But blaming them on global warming is wrong, as meteorologist Dr. Roy W. Spencer (whose Ph.D. dissertation was on hurricanes) explains in Inevitable Disaster: Why Hurricanes Can’t Be Blamed on Global Warming. They haven’t become either more frequent or more severe during alleged man-made global warming. In fact, recent decades have seen a downturn in both frequency and intensity. Is Global Warming Connected to Asthma?

And just exactly how, pray tell, is that related to global warming?

There is considerable controversy about what’s causing increased asthma rates. (They aren’t limited to black communities, by the way. But it’s always convenient to Leftists to play the race card.) Increasing atmospheric greenhouse gases, though, aren’t to blame. Water vapor (which causes the vast majority of the greenhouse effect), carbon dioxide (a distant second), methane (a far distant third), nitrous oxide (still farther), and several trace gases don’t cause asthma.

Some sharp reader is bound to think, “But what about ozone? It seems related to asthma — and it’s one of those trace greenhouse gases.” But it’s the ozone relatively evenly distributed around the globe that contributes to the greenhouse effect. That’s about 0.000004% of the atmosphere. (That compares with water vapor, about 0–4%, oxygen, about 20.95%, and nitrogen, 78.08%.) Ozone that seems to contribute to asthma is what hugs the ground in smog in and around major urban areas.

Does Global Warming Affect the Global South the Most?

There remains that last justification for the demonstration: “Global patterns of disparity compound this: Communities in the Global South are on the frontlines of climate change, hit first and worst, even though they have done the least to cause climate change.”

Note first the term disparity, a common sign that what’s really going on is politics, not science. It’s the politics of egalitarianism, which confuses equality with justice. These are “social justice” warriors, not people driven by hard science. And as I demonstrate in Social Justice vs. Biblical Justice: How Good Intentions Undermine Justice and Gospel, social justice = injustice.

Still, are “Communities in the Global South … hit first and worst”? Well, actually, the hard data show, as greenhouse theory predicts, the opposite. The Northern Hemisphere is warming twice as fast as the Southern. And the polar regions are warming faster than the equatorial region.

A Quest for Socialism, a Recipe for Poverty

So what’s really driving Sojourners and YECA? The same thing that’s driven Sojourners founder Jim Wallis since his days as a 1960s radical. It’s the quest for socialism. Once it was driven by the hope that it would provide better for the poor. That hope was dashed by history. Now it’s driven by the hope that it will solve climate change. That hope, too, will be dashed if it’s tried.

And the truly sad thing is that the people most hurt by what Wallis and his friends want done — rapid switch from fossil fuels to renewables like wind and solar — will be the very “least of these” about whom they profess to care so much. They’ll be trapped in poverty for generations to come for lack of the abundant, reliable, affordable energy indispensable to lifting and keeping whole societies out of poverty.

Calvin Beisner, Ph.D., is founder and national spokesman of The Cornwall Alliance for the Stewardship of Creation.