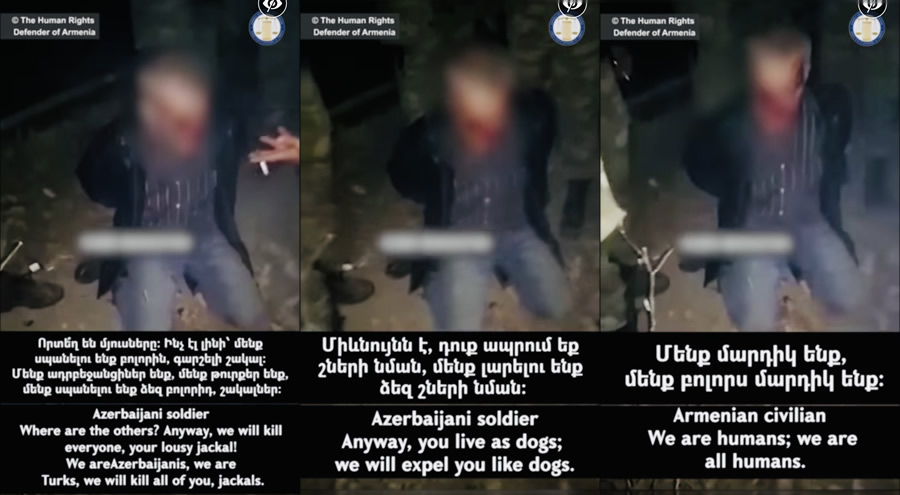 Two Lebanese-Armenian sisters, Maral and Ani Najarian, moved from Lebanon to the Armenian Republic of Artsakh (Nagorno-Karabakh) in the South Caucasus in September following the Beirut blasts in August of last year. They hoped for a peaceful life but instead found themselves in the midst of a violent war.

Ten days after they moved to Artsakh, in the early morning hours of September 27, armed forces of Azerbaijan, a Shiite Muslim nation, with the full support of Turkey and the involvement of Syrian mercenaries, launched a full-scale attack against Artsakh.

In an interview with the news website Hetq, Ani said that the two sisters were staying in a hotel in the town of Berdzor in Artsakh when Azerbaijan started bombing the town. They had to leave behind their suitcases and flee to Yerevan, the capital of Armenia, for safety.

Azerbaijan’s attack against Artsakh was suspended following a ceasefire agreement signed on November 9 by Armenia and Azerbaijan and brokered by Russia.

When Armenians were ordered to leave parts of their ancient homeland as part of the agreement, Maral decided to take the belongings she left behind. She was accompanied by her friend, Viken Euljekdjian. On their way, both were kidnapped and arrested by occupying Azerbaijani forces. Maral was released from prison on March 10 after being held unlawfully for four months by Azerbaijan. Vicken is still held hostage by Azerbaijani authorities — alongside many other war hostages.

During the war, Azerbaijan carpet bombed Artsakh for 44 days, hitting homes, hospitals, churches and other civilian targets. Tens of thousands of Armenians were forced to flee their ancient homeland. The Azeri military has continued targeting Armenians even after the November ceasefire and posted videos of their own crimes against Armenians such as beheadings and mutilations.

Following her release, Maral was flown home via Istanbul after an 11-hour layover in Turkey. She remained fearful of being kidnapped again during her entire time in the country, the International Christian Concern reported.

The door which never opened for me finally opened, she said in an interview following her arrival in Beirut. I do not know how I left [prison], but when I did, I looked back and said, ‘dear God, whoever is imprisoned here after me, don’t let them be tortured like I was. Let them leave fast.’

In another interview, Maral described how Azeri soldiers treated Vicken when they were first arrested:

Within moments, eight soldiers surrounded Euljekjian and tied his hands behind his back. They began to kick him as Euljekjian, fearing for his life, yelled that he was forced to fight in the war.

They [Azerbaijani soldiers] beat him all over his entire body and repeatedly told him that he used a gun against them and needed to be punished. I remember there was blood all over Viken’s face. He and I were both yelling out that he didn’t want to go and fight and I was trying to push the soldiers off of him, but they shoved me aside so that I wouldn’t get beaten too, recalled Najarian, unable to hold back tears as she described this painful account.

She said the soldiers then covered Euljekjian’s head with a hood. With hands tied, both were forced into a 4×4 jeep and headed to a military prison camp about 30 minutes away.

The Human Rights Ombudsman of the Republic of Artsakh has been issuing comprehensive reports documenting Azeri war crimes against Armenians. One report details civilian casualties caused either as a result of targeted strikes or in Azeri captivity. The report also reveals cases of torture and mutilation of corpses. Some examples include:

Alvard Tovmasyan, 52, from the region of Shushi, suffered from mental illness. Her body was found on January 13 during a search in her village. An examination of the body revealed obvious signs of torture; her left ear and tongue had been cut off.

Arsen Gharakhanyan, 45, lived in Hadrut. His body was found on January 19 during a search for corpses in the city. According to a preliminary report after a forensic examination, Arsen died as a result of torture and the gunshot wounds on his body were posthumous. Prior to the discovery of his body, two videos with Arsen in them were uploaded to an Azerbaijani internet site. On January 14, the European Court of Human Rights ruled in favor of an interim measure. Arsen had entered Hadrut to evacuate his father; but they were captured by Azerbaijani armed forces.

Ellada Balayan, 61, lived in the town of Martuni in Artsakh. On September 27, Azerbaijani troops attacked the town. Ellada was killed after being hit by shrapnel near her house. Her neighbor’s nine-year-old daughter, Victoria Gevorgyan, was also killed in the same explosion. Two-year-old Artsvik Gevorgyan, Anahit Gevorgyan and her neighbor Manush Avanesyan were injured.

Lyuba Mamunts, 64, was standing in front of a shop in the Martakert town with her son David Khachatryan, husband Hrant Khachatryan and sister Larisa Mamunts when the Azerbaijani army started shelling the town. Lyuba, Larisa, and Hrant were killed on the spot by shrapnel on September 30. David was seriously injured.

Calling for Release of Prisoners of War and Civilian Detainees

After bringing so much death and destruction to the indigenous Christian Armenian community of Artsakh, Azerbaijan is still holding many Armenians as prisoners of war (POWs).

Public reports indicate that as many as 200 Armenian detainees remain in Azerbaijani custody, their March 16 press release read. Under the Geneva Conventions and the November 9, 2020 tripartite statement signed by Armenia, Russia, and Azerbaijan, all parties have an obligation to release prisoners. Armenia has fulfilled this obligation, while the Government of Azerbaijan continues to misrepresent the status of these POWs in an attempt to justify their continued captivity.

It is unacceptable that more than 100 days after the end of the war in Nagorno-Karabakh, hundreds of Armenian service members and civilians remain in Azerbaijani custody, where little is known of their condition, treatment, or well-being, said Rep. Schiff. Azerbaijan has an obligation to release these prisoners immediately — the longer the delay, the more it demonstrates their disregard for human rights and international law. Azerbaijan is already guilty of grave atrocities committed during the recent war, and this compounds the problem.

Reports of inhumane treatment of these prisoners, as well as misrepresentation by Azerbaijani authorities to justify their continued capture, makes clear this is an issue of both human rights and international law, said Rep. Valadao.

In addition to unlawful detention, we now know that Azerbaijan has subjected those in its custody to violent and humiliating treatment that shocks the conscience, said Rep. Speier. In the most extreme cases — as documented by a Human Rights Watch report — Azerbaijan engaged in the extrajudicial execution of captured civilians including 79-year-old Eduard Shahkeldyan, who died of a blunt brain injury while imprisoned in Baku, and Arsen Gharakhanyan, who was shot in the head by his Azeri captors in January. The U.S. must do everything in its power to pressure Azerbaijan to release all prisoners of war and captured civilians to their families, pursuant to the agreement signed over four months ago, and must hold Azerbaijan accountable for its blatant disregard for international law.

Planning for a Genocide

Dehumanizing, murderous hate speech against Armenians has become systematic in Azerbaijan. During the war, for instance, Azerbaijan’s President Ilham Aliyev said in a televised address: “This is the end. We showed them who we are. We are chasing them like dogs.”

As these crimes were being committed against Armenians, Turkish and Azerbaijani soldiers participated in a military “victory parade” in Azerbaijan’s capital city of Baku on December 10. The parade, organized to celebrate the countries’ joint “military victory” over Artsakh, was attended by Turkish President Recep Tayyip Erdogan and Azerbaijan’s President Ilham Aliyev.

During the “victory parade,” Erdogan delivered a speech in which he praised Enver Pasha, one of the planners of Ottoman Turkey’s 1914-1923 Christian genocide, which took the lives of around 1.5 million Armenians and at least one million Greeks and Assyrians. The Ottoman military march was also played during the event.

Today is the day when the souls of Nuri Pasha, Enver Pasha and the brave soldiers of the Islamic Army of the Caucasus are blessed.

By glorifying the organizers of the 1914-1923 genocide, Erdogan made it clear that the intentions of Turkey and Azerbaijan in Artsakh are also genocidal.

If we do not count the persecution of the tiny Armenian community in Turkey and the continuous destruction of their cultural heritage, the Turkish participation and support to Azerbaijan in the genocidal campaign against the Armenians of Artsakh in 2020 was the first time in almost a century when Turkey, without showing a scintilla of remorse about its criminal past, openly engaged in a yet another attempt of annihilation of Armenians as a group living on their ancestral land.

During and after the war, the Azerbaijani authorities have and continue to violate international human rights standards by failing to return all of the prisoners of war, and by refusing to reveal the true number of captives in their custody.

By labeling them as ‘terrorists,’ they have made a mockery of international human rights laws, and have revealed themselves for what they really are: a rogue state.

The international community, lest it wish to continue in the role of an enabler, must impose severe sanctions to halt Azerbaijan’s sense of being untouchable and above the law.

For years now, hatred and enmity towards Armenians have been sown in Azerbaijan at the highest state levels. Hatred, which is not only based on ethnicity, but also laced with overtones of religious hatred.

While Azerbaijani authorities have continued torturing and treating Armenians in their custody inhumanely, as evidenced by their own publicizing of videos depicting malice aforethought, studies and reports by Arman Tatoyan, the Human Rights Defender of the Republic of Armenia, and the joint reports by the ombudsmen of Armenia and [the] Nagorno-Karabakh (Artsakh) republic, and the recent report by the Human Rights Watch, indisputably show that the hatred preached at the highest levels of the Azerbaijani government was carried out during the war by the despicable acts of monstrosity against Armenians without impunity.

Needless to say, the perpetrators of these crimes against humanity, both at the individual and state level, must be brought to justice.

If the world does not wish to see a repeat performance by these actors, and if it’s to prevent the commission of such crimes in earnest, there must be consequences meted out. Failing to act will breed impunity, and in turn, impunity will breed new and more heinous crimes against humanity.

Uzay Bulut is a Turkish journalist and political analyst formerly based in Ankara. Her work focuses mainly on human rights, Turkish politics and history, religious minorities in the Middle East, and anti-Semitism. Follow her on Twitter: @bulutuzay_