Does Jesus Want Georgetown to Side With Pagan Persecutors of the Church? Ask Fr. James Martin. 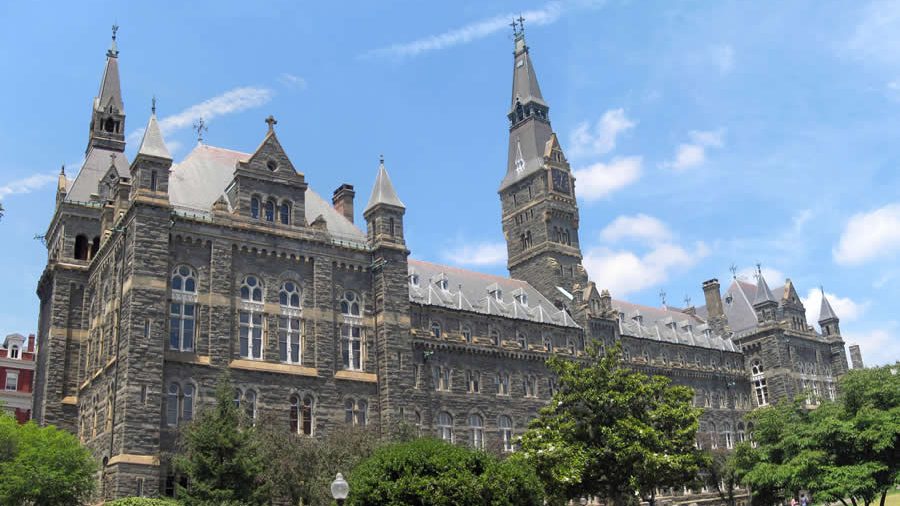 What would we think of an historically black college that promoted racism? That suppressed student civil rights organizations? What if the school were doing that in the 1930s, when civil rights causes were widely unpopular? When the law was often perverted to prosecute their advocates?

We would accuse that school’s leaders of selling out. Of betraying its founding mission. Of placating an immoral culture. Now imagine if it were the first historically black college in the country, and one of the most prestigious.

Why that would be quite a scandal. Wouldn’t it?

Something quite parallel might be happening right now. At Georgetown University. It’s the first Catholic college in the United States. It’s run by the once-elite Society of Jesus (the Jesuits). We will soon find out if the school is so intolerant of the church’s teaching on marriage, that it’s willing to ban student groups that support it.

A pro-marriage student group at Georgetown University is in danger of being defunded and barred from campus facilities, after fellow students have petitioned that it be recognized as a “hate group.”

The Hoya, Georgetown’s student newspaper, reported on Oct. 20 that Love Saxa, a student organization promoting Catholic doctrine regarding marriage, will undergo a Student Activities Commission hearing on Oct. 23, to defend itself against charges that the group fosters hatred and intolerance. The hearing is a response to a petition filed by a student-senator in the Georgetown University Student Association, and supported by leaders of gay pride student organizations at Georgetown.

Lova Saxa’s student-president Amelia Irvine told CNA, “I believe that Love Saxa has the right to exist, especially at a Catholic school. We exist to promote healthy, loving relationships at Georgetown.”

In a Sept. 6 column in The Hoya, Irvine wrote that “we believe that marriage is a conjugal union on every level – emotional, spiritual, physical and mental – directed toward caring for biological children. To us, marriage is much more than commitment of love between two consenting adults.”

Leaders of gay pride student organizations at Georgetown denounced this language as “homophobic,” and claimed it violated university standards.

The university’s Student Organization Standards state that: “Groups will not be eligible for access to benefits if their purpose or activities … foster hatred or intolerance of others because of their race, nationality, gender, religion, or sexual preferences.” Love Saxa is accused of fostering hatred and intolerance, because of its support for Catholic teaching regarding marriage.

In an Oct. 20 editorial, The Hoya’s editorial board advocated for Love Saxa’s defunding. The editorial board wrote that Love Saxa fosters intolerance by “actively advocating a limited definition of marriage that would concretely take rights away from the LGBTQ community.”

Since the narrowly decided Supreme Court decision Obergefell v. Hodge, LGBT advocates have moved quickly. They’ve worked to equate support for traditional marriage with white racism. You see, the Supreme Court has declared same-sex marriage a fundamental right. One that flows from human dignity. So those who oppose it even for religious reasons are enemies of equality. Just like the Klan.

Supreme Court dissenters such as Chief Justice John Roberts warned us. They were right. LGBT activists are threatening religious liberty. We have seen state governments prosecute florists, bakers, and wedding planners for declining to take part in such weddings.

In a widely publicized column in September, Rev. Martin called those who criticize his LGBT advocacy the “Catholic alt-right.” So he lumped the likes of St. John Paul II and Benedict XVI with torch-wielding racists like Richard Spencer.

Within Christian churches, LGBT advocates try to leverage the vast power of official government legal doctrine. How? To condemn orthodox believers as “bigots.” Remember the universal teaching of almost every Christian church circa 2000 or so? It is now a “hate” stance. A number of liberal Protestant churches have embraced same-sex unions. And LGBT activists in Catholic churches have tried aggressively to link those who oppose them to disgraced white racist views.

And one of the loudest is Rev. James Martin. He’s a Vatican advisor. A member of the same Jesuit order that runs Georgetown University. In a widely publicized column in September, Martin referred to those who criticize his LGBT advocacy as the “Catholic alt-right.” So he lumped the likes of St. John Paul II and Benedict XVI with torch-wielding racists like Richard Spencer. This at a time when universities are muffling the free speech of students. When schools ban or hecklers silence visiting lecturers. When Antifa thugs openly call on their members to “punch” those they consider “Nazis.”

But maybe we shouldn’t be shocked that a Jesuit university seems poised to join in Caesar’s persecution of the church. At least if Rev. Martin is any gauge of the Jesuit order. Read his interview with the official Jesuit magazine America. He talked about the Martin Scorcese film Silence which he advised and promoted. It tells the fact-based, tragic story of some Jesuit missionaries in 17th century Japan. These men buckled under torture and renounced Christianity. To spare their skins, they publicly abused icons of Christ. They accepted positions with the pagan government. These priests broke their vows by marrying. They adopted Buddhism. Some actually helped the intolerant pagans hunt down more Christians for persecution.

Is Jesus Asking You to Persecute Christians?

But Fr. Martin told America magazine that the priests depicted in the film acted correctly. In fact, they were following what Jesus Christ asked of them.

You might think I’m twisting the priest’s words. But here they are, in context:

Only in the end, after several searing experiences that include his own physical suffering and witnessing the torture and execution of others, after long periods of agonizing prayer and, in particular, after hearing the voice of Christ in his prayer, does Father Rodrigues apostatize.

He apostatized not simply because he wished to save the lives of the Japanese Christians, but because this is what Christ asked him to do in prayer. Contrary to what some Christian critics have concluded, it is hardly a glorification of apostasy.

Confusing as it seems to some Christian viewers, Christ requests this contradictory act from his priest. It makes little sense to anyone, least of all to Father Rodrigues, who has assiduously resisted it for himself. Yet he does it. Because Jesus has asked him to. [emphasis added]

Do the Jesuits at Georgetown think that Jesus is asking them to do this? To renounce the Church’s timeless teaching on marriage and sexuality? To go a step further and help our pagan state punish and (ahem) silence believers? Does Rev. Martin think that he and his fellow liberal Jesuits are secret moral heroes? That Jesus wants them to side with billion-dollar corporations and viciously anti-Christian pressure groups and the U.S. federal government? Against Catholic college students? Does Fr. Martin support the free speech of faithful Catholics even at a Jesuit university? Will he say so, publicly. Does Georgetown want to continue as a Catholic university in any sense whatsoever? If it does, then it must rein in its student government and support this student group.

Which Is the Smallest and Most Rejected Minority in America? Ex-Gays