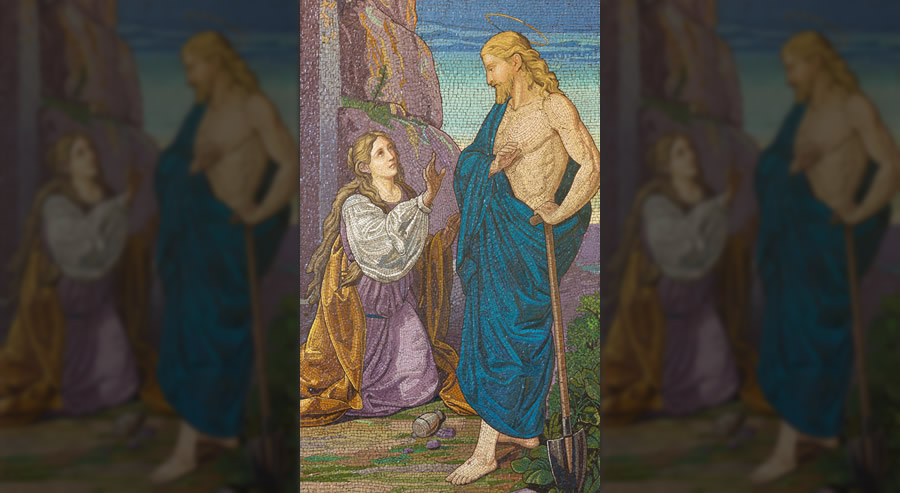 The Christ's Appearance to Mary Magdalene, designed by C.T.G. Formilli (1927 – 1932), is seen in the Brompton Oratory (Immaculate heart of Mary) Catholic church in London, England.

Jesus has many titles. He is the Son of God; the Son of man; the Lamb; the Messiah; etc. But seldom do we call him the gardener. Mary Magdalene mistook Jesus for a gardener when she went to the tomb on Sunday morning and couldn’t find Jesus’ body. She asked him where the body had been taken so that she could attend to it. He revealed himself as the resurrected Lord. But there is a real sense in which her mistaken assumption was correct: that he was the gardener.

Adam was the first gardener. He was created by God to manage the Garden of Eden with a view to expanding to the whole world. It has always been God’s intention to rule the earth through his human partners — one garden at a time. We are all too familiar with the story of how Adam and Eve sinned and were exiled from the Garden. A curse came upon all the earth because of their sin, and the garden of the earth felt the effects of neglect, including all societal structures.

Later, God chose the descendants of Abraham as his partners and gave them a land to manage. They too sinned and were exiled into Babylonian captivity. Then, God sent his Son. He appeared as the final Adam, and as corporate Israel, to accomplish what neither of them could. After he had paid the cost of their failure, he arose from the dead — in a garden, as the first fruits of a new creation. Those who are “in Him” are assigned to manage the new garden.

While with his disciples before his death, he had shown them what it looked like. He sent them out into the villages to herald the arrival of the Kingdom of God. Since he sent them, they had his authority to heal, cleanse and deliver. He spent 40 days after his resurrection with various disciples speaking to them about the nature and implementation of the Kingdom. Then he ascended to the right hand of the Father. Finally, there was a man (God-man) ruling God’s creation.

It has been testified somewhere,

“What is man, that you are mindful of him, or the son of man, that your care for him? You made him for a little while lower than the angels; you have crowned him with glory and honor, putting everything in subjection under his feet.”

Heralding the Presence of His Kingdom

After his ascension, the disciples were sent to the whole world to herald the presence of the Kingdom of God. This is the mission of the church in our day. It is what we do in the meantime based on what Jesus has already done while we wait until we receive resurrected bodies in the culmination of the new creation.

We are working in his garden under his loving rule. We are privileged to be his partners sharing in his life and mission. We live with confidence in him though we face daunting tasks while living in a world that reels from the chaos of sin. The great news is that He is already on the throne and no one rivals him. He wins, and we share in his victory. As we glimpse at the garden through the eyes of John, the human author of The Revelation (chapters 21-22), we see the garden in the final form.

Let’s identify our personal gardens and get to work.

The Problem With a Symbolic Resurrection