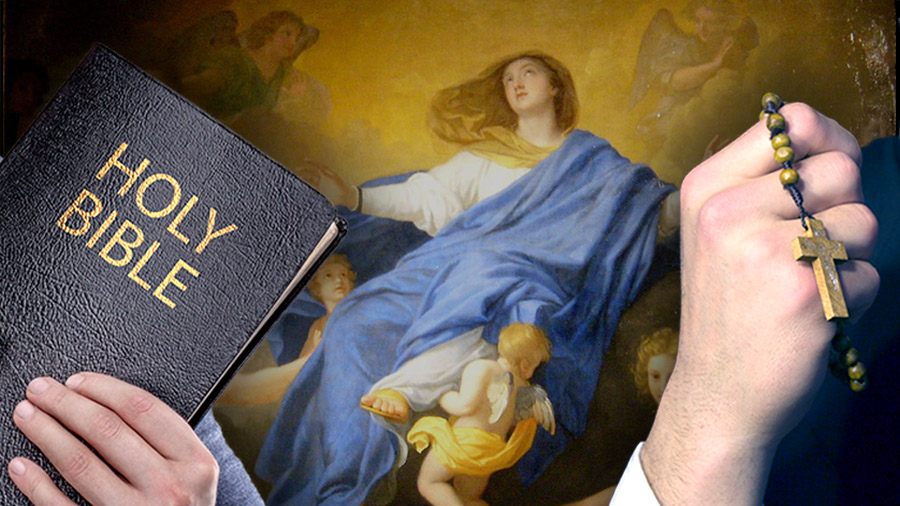 Yesterday was a very special day for hundreds of millions of Christians. Catholics, Orthodox, and Anglicans celebrate the last days of the Blessed Virgin Mary, and her passage to heaven. For Protestant readers who may find this … exotic … here’s a brief explanation.

We believe Mary was the first and the most faithful Christian. She was with Him at His conception, to which she freely assented when an angel announced it. With only St. John among the apostles, she watched His slow death on the Cross. She was the only woman present at Pentecost. It’s not clear if she watched as He ascended into heaven.

We believe that she enjoyed special graces. Specifically, God cleansed her of original sin from conception through the grace of the future death of her Son. That grace was so profound that she lived her entire life without offending God, which is what the angel meant when he called her “full of grace.” God also crowned her last days with the fate He’d intended for Adam and Eve. Instead of a painful death and foul corruption, she was raised directly to God, like the prophet Elijah.

If death and corruption really weren’t part of God’s plan for Adam and Eve, but they and their descendants were meant to “be fruitful and multiply,” how exactly would that have worked? Would they have burst the bounds of Eden, and filled the earth with billions and trillions of deathless humans, till Earth was as thickly peopled as Hong Kong or midtown Manhattan?

None of this is directly recorded in the Bible. But Christians clearly believed there was something distinctive about Mary’s conception and last days from very early on. Missionaries carried these ideas with them to every nation they evangelized. We find ancient prayers in liturgies from India to Armenia and Ethiopia reflecting beliefs like these. So if the Church got that wrong, it did so early on, before it had drawn up the canon of the New Testament or clarified the divinity of Christ.

Why No Profitable Relics of Mary?

If you’re of a more cynical turn of mind, consider this: Catholics are crazy for relics, for tangible pieces of bodies we know will be glorified in heaven. Shrines grew vastly wealthy and popular touting the bones of this saint, or the liquefied blood of that one. Since Jesus rose body and soul, that rules Him out. The next most attractive candidate would be His mother. No bingo game or indulgence could rival that as a financial opportunity. But no chapel, however corrupt, in Church history made a claim to have Mary’s body, or any part of it. That shows how far back the belief in her mysterious disappearance must go.

But why should this matter to us? Well, there are countless theological implications, of course. The part I find most helpful: The Assumption offers an answer to a question Genesis raises. If death and corruption really weren’t part of God’s plan for Adam and Eve, but they and their descendants were meant to “be fruitful and multiply,” how exactly would that have worked? Would they have burst the bounds of Eden, and filled the earth with billions and trillions of deathless humans, till Earth was as thickly peopled as Hong Kong or midtown Manhattan? That doesn’t sound Edenic, even to a New York native like me.

The Assumption offers an answer. Or so I deduced at age 17 as I listened to the great Christian historian Jaroslav Pelikan at Yale. “If Adam and Eve had remained sinless, as Mary did, maybe they’d have been taken up into heaven as she was.” Or so I speculated. At the lecture’s end, I shoved up to the world famous scholar and trotted out my theory. His kind old face lit up: “Young man, that is exactly what medieval theologians said, too.”

In any event, the Feast of the Assumption has always been popular in Poland, and that fact made a big historical difference. Most of us know about the Russian Revolution. What few remember today is that it almost spread west and conquered all of Europe, in the chaos after World War I. Germany was torn apart by civil war between Communists and nationalist Freikorps. A simple push in the form of an invasion by the Red Army would have turned Germany Bolshevik. Hungary had already endured a Communist revolution. We almost had the Eastern bloc 25 years early.

What stood in the way was Poland. The same long-suffering nation that had only just won its independence, and would someday lead the revolt against Communism in the 1980s, Poland saved Europe in 1920, too. As I wrote a few years back, the Red Army, led by Leon Trotsky

nearly captured Warsaw and spilled into central Europe, whence it might well have conquered a prostrate Germany, Austria, and Hungary – just for starters. The heroic Polish defeat of the Soviet forces will always be known in that land as the “Miracle of the Vistula,” since the battle raged in the octave of the Feast of the Assumption, and many Polish soldiers claimed that they saw Our Lady appear over the battlefield, which spurred them on to fight.

Just 19 years later, also in August, Poland’s short-term fate would be sealed, when the Nazis and Communists signed their 1939 alliance, the Hitler-Stalin pact. Its secret provisions arranged for a joint invasion of Poland, which sparked the Second World War. Read Ryszard Legutko’s essay on this moment of totalitarian solidarity against both faith and freedom.

Mary’s Free “Yes” to God, and the Communist “No”

Pope Pius XII knew a thing or two about totalitarianism. Even before he was pope, he’d tried to stop the Nazis and Communists. He warned U.S. Ambassador Joseph Kennedy that Hitler was possessed by Satan, and no one to make any deals with. He traveled to the U.S. to silence Father Charles Coughlin, a powerful radio priest who quoted Nazi propaganda to millions of voters. And all through the war he labored to save Jewish victims, rescuing (according to Jewish sources) some 800,000 persecuted Jews. He ordered convents and monasteries to hide them by the thousands. Pius issued phony baptismal certificates so they could pose as gentiles. He even used Vatican couriers to transmit messages among the men plotting to assassinate Hitler.

After the war, he saw the Communist monster occupying half of Europe as not much of an improvement. He ordered bishops to stand strong, and refuse collaboration with the occupying governments. And to bolster the faith of the common folk, he emphasized devotion to the Blessed Virgin Mary. One way of doing that? Pius took the widely-held theory that Mary was physically assumed into heaven and confirmed that it was true. In 1950, he declared it a dogma. Few remember it today, but that declaration brought together the Catholic world, and sparked celebrations from Warsaw to Manila. But I have another theory, which I lay out in my first religious humor book, The Bad Catholic’s Guide to Good Living. Remember that by 1950 the Sputnik program was well under way. Pius XII was trying to beat Stalin into space. As I say in the book, Pius

could see the progress of Soviet technology, and the preliminary steps towards space exploration. … What better way to trump the scientific pretensions of atheistic Communism than to demonstrate that the Vatican possessed a superior technology, a simpler and more elegant way to enter the heavens — and that its first pioneer in space had ventured there 1900 years before.

This interpretation of the mystery was inspired by meditation upon an image of the Assumption drawn by some well-meaning nun in the 1950s. … It depicted a streamlined, aerodynamic Mary shooting up from the ground, leaving vapor trails as she passed. … We think that nun was onto something. And Pius XII was way ahead of his time; he beat the Sputnik program by seven years!

And if that doesn’t convince you, see the video I produced below: