Jesus in the Desert: A Christian Approach to Trauma 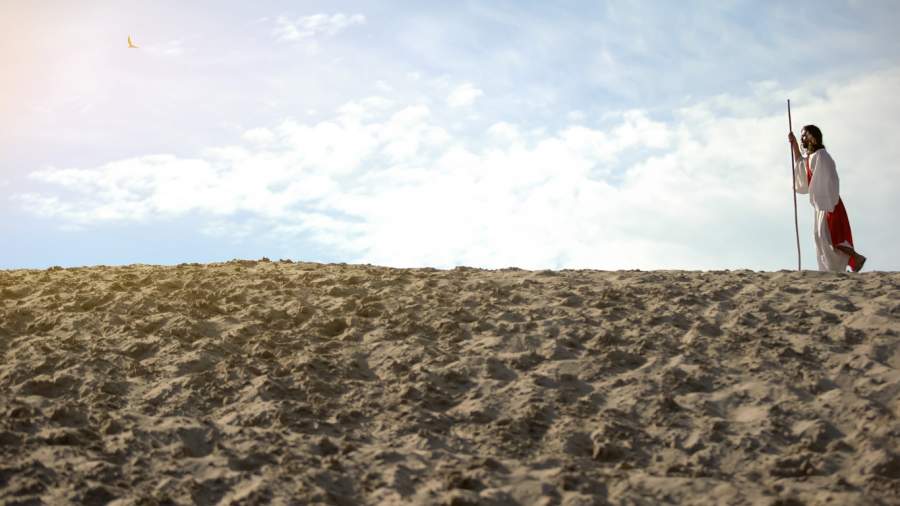 To an outside observer it must have seemed like a suicide attempt. I had been diagnosed with cancer, gone through chemotherapy, and survived. I’d driven from my home in Washington, D.C. and to a hotel on the Eastern Shore of Maryland. It’s a place I had spent summers at as a kid.

One night at around three a.m. I woke up and slipped into an old pair of blue Birdwell surfing shorts. I humped across the beach, and went into the ocean. I’d swim a few yards, wading deeper into darkness, and tell myself to turn around. But the heart-racing thrill of doing something dangerous made me keep pushing. The lights of the shore became small and distant.

In the water, I was completely at peace — gently treading water, enveloped in darkness, and my breath low and steady. I felt both infinitesimal under the starry dome of the sky and powerfully embodied as I floated on the water. I felt connected to God and the healing power of Christ.

I was not expressing a death wish, but treating symptoms of post-traumatic stress disorder. PTSD is something that happens not only to soldiers and victims of natural disasters, but to cancer survivors, among others. Months of IV tubes, chemotherapy, and vomiting — not to mention huge bills — had left me anxious and depressed. I was on edge emotionally, burdened with shame and prone to quick explosions of anger. I experienced dissociation, when my mind would, for a moment, go blank. PTSD sufferers can get addicted to adrenaline highs. It was an attempt to feed that need for speed, not just dumb thrill seeking, that led me to go swimming in the ocean in the middle of the night.

My journey over the several years since my successful treatment has led me to explore ways for a Christian to treat trauma. The research has been rewarding. One thing that has been key is the concept of Christian mindfulness.

Christians can practice mindfulness, but it’s not the same mindfulness associated with Buddhist and New Age practitioners. Mindfulness is defined in the dictionary as “a mental state achieved by focusing one’s awareness on the present moment, while calmly acknowledging and accepting one’s feelings, thoughts, and bodily sensations, used as a therapeutic technique.” It’s a practice that in recent years has become hugely popular in the West.

Hindu or Buddhist mindfulness tends to treat the material world as an illusion one must transcend. My experience in the ocean, in contrast, focused on the beauty of God’s nocturnal world and a belief that Christ could salve my wounds. Its raised my awareness that the world, though fallen, is still a place charged with the grandeur of God.

“Test and approve what God’s will is — his good, pleasing and perfect will.”

The best term for what I experienced, and continue to practice, is what the theologian Charles Stone calls “holy noticing.” In his book of that title, Stone argues that the original mindfulness is not New Age, but biblical. He defines it as “the art of holy noticing – noticing, with a holy purpose, God and His handiwork, our relationships, and our inner world of thoughts and feelings.” He then goes on:

Should Christians embrace [mindfulness] just because everyone else is doing it? No. Much about mindfulness in popular culture has nothing to do with God, Jesus, the Bible, or Christianity. And ‘Christianizing’ the latest fad dilutes the faith and can lead us astray.

The second chapter of Stone’s book shows how the Bible and church history support the discipline of holy noticing. There are almost 200 biblical references throughout the book. Passages like:

The Focus Stays on Christ

In her book Christ-Centered Mindfulness, Kathherine Thompson goes through the history of Christianity to reclaim a Christian mindfulness practice where the focus is on Christ. Like Stone, Thompson cites many passages from the Bible to support her argument about ancient Christian references to mindfulness. She holds that Christ-centered mindfulness is actually “a form of prayer that dates back hundreds of years.”

Christian mindfulness or meditation is based on “contemplative prayer,” the silent prayer, in which you seek to focus your mind on God. Such were the exercises of St. Teresa of Avila, St. Ignatius Loyola, and Thomas Merton. Teresa of Avila’s The Interior Castle is a detailed contemplation about entering the heart of God.

“Contemplation is the highest expression of man’s intellectual and spiritual life,” as Merton, a Trappist monk, wrote:

It is spiritual wonder … . [S]pontaneous awe at the sacredness of life, of being. It is a vivid realization of the fact that life and being in us proceed from an invisible, transcendent and infinitely abundant source. Contemplation is, above all, awareness of the reality of that source.

God Is With Us

“Christian mindfulness practice is rooted in the most basic witness of Jesus: God is with us, right here, right now.” So Amy G. Oden observes in her book Right Here Right Now. “Jesus proclaims, The reign of God is at hand! here, now, available for all, if we pay attention. Or, as Jesus says, if we have eyes to see and ears to hear. If we are mindful.”

One of the most rewarding experiences of holy noticing can come during intense physical activity, which is a key part of PTSD treatment. In his book The Body Keeps the Score, Dutch psychiatrist Bessel van der Kolk argues that trauma has nothing to do with rational cognition. It “has to do with your body being reset to interpret the world as a dangerous place.”

Van der Kolk believes that “the single most important issue for traumatized people is to find a sense of safety in their own bodies.” In interviews he has also spoken about a spiritual experience when he was a teenager. He was hitchhiking through France when he passed a monastery. He heard the chanting of monks and was so taken with the sound that he asked the driver to let him off. Bessel spent the rest of that summer at the monastery, then returned two more times. Shortly after, his medical interests took him to the University of Hawaii.

There Is No Panacea

The Body Keeps the Score explains how most PTSD patients benefit from some combination of treatments. This “menu” of healing includes yoga, EMDR (Eye Movement Desensitization and Reprocessing), psychomotor therapy, neurofeedback, and theater and dance, among other things. Van der Kolk is big on yoga, whose intense posing can help patients reconnect with their own body.

Christians are divided on yoga, which I have found helpful simply as a form of exercise without spiritual effects. (Some disagree, and warn that it entails Hindu worship.) I also enjoy more intense sports like biking and skateboarding. PTSD sufferers often have become addicted to adrenaline highs, and fun physical activity can feed that need in a healthy way.

Several years ago I interviewed Army Chaplain Justin David Roberts, who has served time in Afghanistan with the No Slack division of the 101st Airborne. (Its motto: “No breather from work, no relief from combat, no request for respite”). Roberts directed the documentary No Greater Love, which explores not only the trauma of battle, but the exhilaration.

Many of the soldiers interviewed talk about the “high” they got from being in combat. “You don’t really realize the physiological affect,” Roberts said. He recalled that when he returned from Afghanistan he “was really craving” a fist fight. He finally realized that he wasn’t craving the fight, but the adrenaline that comes with it. “You get that rush. I couldn’t find it at home.” Roberts told me that’s why so many returning soldiers buy motorcycles and engage in other physically and emotionally charged and dangerous hobbies.

It was that kind of craving that led me out to water that night. Like Christ in the desert, it was a way to be present, grounded in my own body, and focused on the holy noticing of God’s world. By his wounds I was healed.