Speaking at AIPAC 2019, conservative Christian leaders share how anti-faith, anti-Israel voices are working to gain influence — even in red states like Texas and West Virginia. 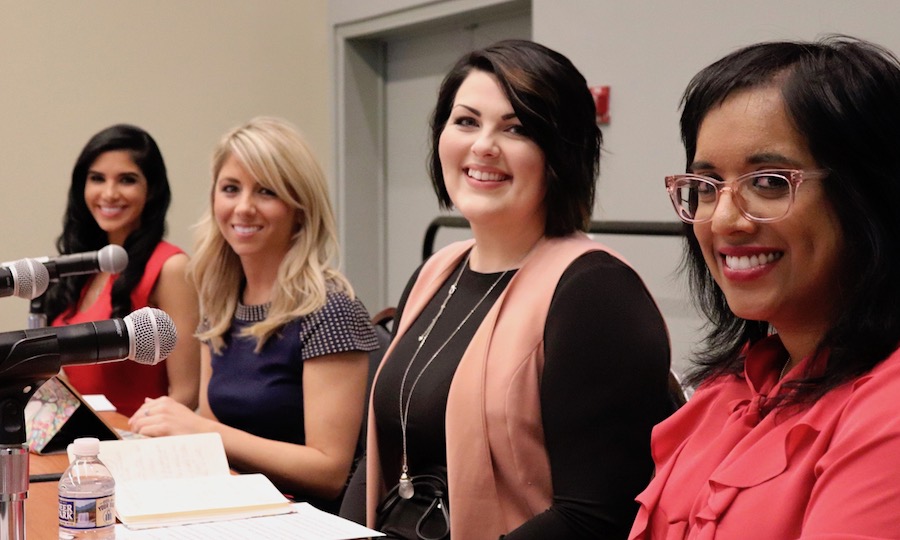 One Sunday afternoon breakout panel featured three young women leaders. They discussed how their views of the Bible and Christian theology drive their countercultural support for Israel.

“Millennials tend to have a liberal interpretation of Scripture, which is concerning,” said Nicole Hudgens, senior policy analyst at Texas Values. “Older generations have an understanding of the Abrahamic covenant. They know when God makes a covenant, as he did with Abraham, it lasts forever. That covenant with the Jewish people is tied specifically [to] the land of Israel.”

Kayla Kessinger, a state legislator in West Virginia, cited a 2017 study conducted by LifeWay Research to explain further. “76 percent of Christians ages 65 years or older have a positive view of the nation of Israel,” said Kessinger. “Yet four in 10 Christian millennials have no opinion at all on Israel and whether it has a right to exist.”

Online news sources and celebrities drive millennials and Gen Z, stated Kessinger. “Our generation are social media, social justice warriors,” she continued. “A lot of them listen to the BDS movement and groups like Christ at the Checkpoint. Those groups portray Israel as an oppressor and human rights violator.”

Her fellow panelist contended that miseducation on Israel begins much younger.

Hudgens recounted events this past November in the Texas State Capitol. “As Texas goes, so goes the nation,” she said. “What we do when it comes to education impacts other states. When we’re creating our standards, it impacts the curriculum essentially nationally.” As textbooks were set to be revised, working groups proposed changes to U.S. history. The Board of Education meetings became a statewide cause when Texas parents learned what would be coming in their children’s curriculum.

“Currently, children are taught key historical figures who influenced our nation’s founding. These include Moses, known as the first lawgiver.”

A former Congressional staffer, she mentioned marble busts of lawmakers displayed in the U.S. Capitol. Whereas Justinian, Napoleon and others are featured in profile, Moses is seen face forward — reflecting his prominence. Beyond excising Moses, proposed changes touched other significant chapters.

“In the name of streamlining, the Holocaust was being taken out in certain parts of history,” said Hudgens. “When it came directly to how the nation of Israel was formed, the wording of proposed standards [cast] Israel in a negative light.”

“This unelected working group recommended several inaccuracies. In the name of streamlining, the Holocaust was being taken out in certain parts of history.” – Nicole Hudgens

Watching the vote of the State Board of Education, Hudgens recalled her thinking. “I’m seeing how they vote on our other issues—this should be no problem,” said the Texas Values policy analyst. “Vote by vote, it came to where it wasn’t clear [whether] accurate language on Moses and the nation of Israel would prevail.”

“It came down to a tie-breaking vote, with the chair making the decision,” concluded Hudgens. Her side was victorious in the end. “As a Texan, it is extremely concerning because how this conversation is framed impacts the next generation.”

The clash of ideologies has not been confined to education. Kessinger has served in the House of Delegates since 2014. Daughter of a Baptist minister, her West Virginia roots run deep. “I’m from a long line of coal miners and moonshiners — salt of the earth folks!” said Kessinger. “In church, I was taught that the Jewish people are God’s chosen people. It wasn’t until I got involved in politics that I realized some Christians do not share that belief.”

In 2017, she ran for a statewide position as Republican National Committeewoman. The race followed an educational tour she took to Israel. “My life had been so changed by that trip, I gave a little presentation on it to my Republican colleagues,” she said. “I told them my plans to introduce a resolution opposing the BDS movement.”

“Many people stated they supported it,” she said. “Then I mounted the campaign. Now, I could give you a list of reasons to criticize me. But I never in a million years thought my support for Israel would be a reason to oppose my candidacy.”

“I could give you a list of reasons to criticize me. But I never in a million years thought my support for Israel would be a reason to oppose my candidacy.” – Kayla Kessinger

Following protocol, the candidate called every committee member. One exchange stands out for reasons she would rather forget.

“I dialed this gentleman representing southern West Virginia, which is Bible Belt country,” said Kessinger. “He picked up the phone and berated me for a half-hour on my support for Israel and opposition to the BDS movement. It really caught me off guard to hear this from a self-proclaimed Christian. But if supporting Israel causes me to lose as committeewoman, then I don’t want it.”

Yet Kessinger fought for every other committee member vote and won the seat last March. She and other delegates will represent their state party at the Republican National Convention in 2020.

Fighting Misinformation On Left and Right

Both sides of the political aisle are often misinformed on Israel, asserted Hudgens. “In Texas, most members running for office say they are conservative Christians,” she said. “But that does not guarantee support for Israel.”

In West Virginia, Kessinger noted that policymakers with a libertarian perspective tend to be less supportive of the U.S.-Israel relationship. Security aid funding in partnership with the Mideast nation remains contentious.

“Those individuals look at government spending as handouts,” said Kessinger. “I have tried to combat that by emphasizing this funding as saving lives. We see a real return on investment when we partner with Israel. It is vitally important when it comes to not only Israel’s safety, but America’s safety.”

On February 15, President Trump signed a budget bill increasing security aid to Israel by $200 million dollars. However, his announced exit of U.S. troops from Syria has been criticized by pro-Israel leaders in both nations. Such complex issues reveal the need for informed citizens.

At the Washington event, panelists strategized how to educate millennials. AIPAC has made increasing inroads with the next generation, they noted, with 250 student body presidents from all 50 states present. They praised groups such as Passages, which sponsors Christian trips to the Mideast, and Christians United for Israel.

“This issue of Israel’s existence is not the only one in which there is a generational divide among Christians, but this one is very real and relevant,” said Hudgens. “It’s because they are not educated on these issues. We need to be able to fill that void.”

Explore The Stream’s complete coverage of Israel, and sign up to receive top stories every week.