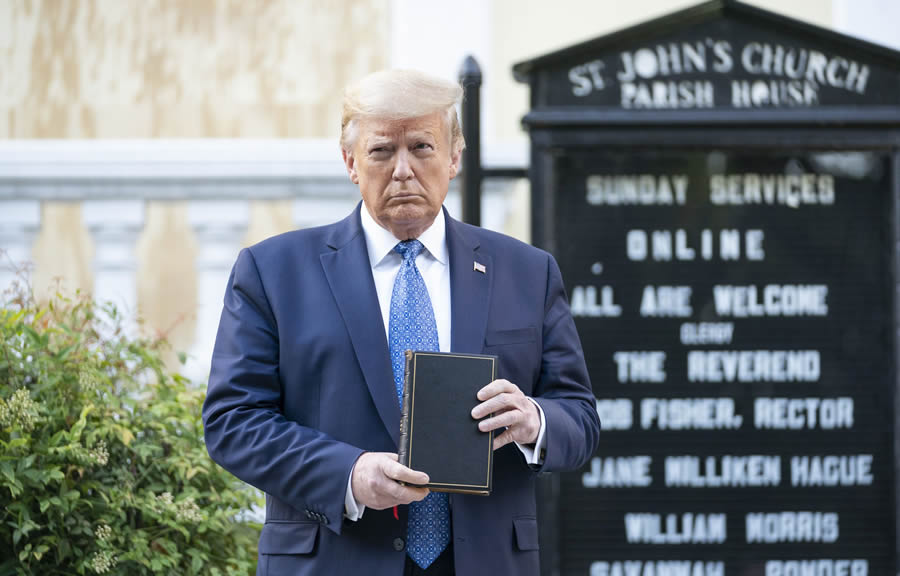 If you can believe this, a group of Christian Republicans is warning other Christians and Republicans not to vote for President Trump in the 2020 election. An ad entitled “Trump is Using Us” was released on Tuesday on the Republican Voters Against Trump YouTube channel.

Like many, I’m perplexed by the divide in the Christian community over President Trump — but I’m not surprised. The media is fueling lies, and the world is listening. And many of those coming against our President are what are commonly called liberal Christians. They love to quote scripture out of context when it supports their narrative. It makes one wonder what is truly leading them: worldly mandates or biblical principles. They rail against supporters with questions like:  “How can you follow Jesus and Donald Trump?”

What Direction is the Country Heading?

Trump is not using us. If anything, we are using him (and I mean that in the right way). We are not following a man. We are in fact shaping his movement.

A better question to be asking is: “What direction is the country heading?” If a leader lacks Christian character but is pointing the nation back to God, is that a bad thing? And if he opposes murdering babies and nods to godly values, is that a scandal? If he stands as a terror to terrorists and makes America secure, is that a danger? If he honors hard work and minimizes free handouts, should we reject that? If he respects law enforcement and punishes rioters, must we scorn him? God doesn’t judge a nation based on the character of one man.  He judges it based on the spiritual health of her people. Never forget that.

The Media is Using Us

I’m equally alarmed at how many progressives and liberals who use Trump’s past against him. Let’s thank God that He doesn’t hold our past against all of us. Scoffers also look to the secular news media for information. But the majority of news outlets spin everything (yes, everything) to put President Trump in a bad light. Their hatred for him trumps the truth. Their agenda is simple and clear: remove him from office at any cost!

In actuality, our media are using many so-called “Christians” to fuel the flames. And I hope you realize this: they are really coming after you, me, and our Christian values. If the truth be told, the video title mentioned earlier should actually read, “The Media is Using Us.” It wields more power to do that than Trump does.

Movement Back to God

Most critics don’t care what the facts are. Their hatred for the president overshadows their desperate need for humility. Let this sink in: innocent children are being protected, godly counsel is surrounding President Trump, terror is being restrained, good judges are being selected, socialism is being resisted, families are being encouraged via employment (black employment is at an all-time high), prayer is being brought back in schools, God’s wisdom is being sought, and on and on it goes. So again, we are not following a man. We are revitalizing a movement — a movement back to God. I’m more concerned with our nation’s character than I am with the president’s personal character.

An analogy that I often use will bring this point home. The head of a neighborhood watch program, who took the late-night watches, had previously had an affair. He was occasionally gruff and impulsive, and sometimes his words were crass and offensive.

But he watched over the neighborhood diligently each night. Each week he invited church leaders into his home to pray for him and his family and to seek their advice. He often stood against others on the committee who wanted to enact policies harmful to the neighborhood and to the children. For instance, an open-door policy where residents were required to allow anyone into their homes at all hours of the day for handouts.

Is this not the kind of person you would want leading your neighborhood watch? Does his past or his demeanor matter more than the results he is accomplishing? If you are intellectually honest, the answer is not difficult. In the same way, the answer is simple for America. Again, we are not voting for people based on how godly they are. We are choosing the future direction of America. We’re choosing the right to life, the elevation of God’s Word back to its proper place, the appointment of conservative judges, securing America and her borders, creating jobs and improving the quality of life for all Americans.

Granted, President Trump is far from perfect. (Aren’t we?) But is he improving, learning, and growing? Is he looking out for the American people according to Romans 13? Be careful: much of what we hear about Trump is actually designed to mislead us. He has an incredible team around him offering spiritual advice on a daily basis. Can you imagine having people like Jack Graham, Jim Garlow, James Robison, Jack Hibbs and countless others speaking into your life or the life of our president? We should be extremely thankful. I find it ironic that many of the never-Trumpers fail to take this into consideration. We should be shouting with joy rather than having sour looks on our faces.

I’ve said the same thin numerous times from the pulpit and with the pen. President Trump is growing and maturing as a leader. God often uses broken and flawed vessels. Based on their reasoning, my past just a few decades ago would disqualify me from becoming a pastor! I struggled with dyslexia and reading disabilities and graduated high school with a 1.8 GPA.

So I should not be writing op-eds on the national level or speaking to tens of thousands on the radio and other media outlets. My critics will laugh at me, but many others will be encouraged (i.e., if God can use Shane Idleman, He can use me, too, if I repent and turn to Him). I am flawed, broken and utterly dependent on God, and I’m not ashamed to admit it. My strength actually comes from my weakness (2 Cor. 12:9-11).

To reiterate, we are not supporting President Trump’s past lifestyle. We are supporting a movement back to God. God will use unlikely candidates to accomplish His purposes. We can’t have our cake and eat it too — there is no middle ground for Christians today. You can choose a president who will destroy the America we know and lead us down the primrose path of socialism — or worse. Or you can choose to back President Trump. There is no Plan B. Find more at ShaneIdleman.com.