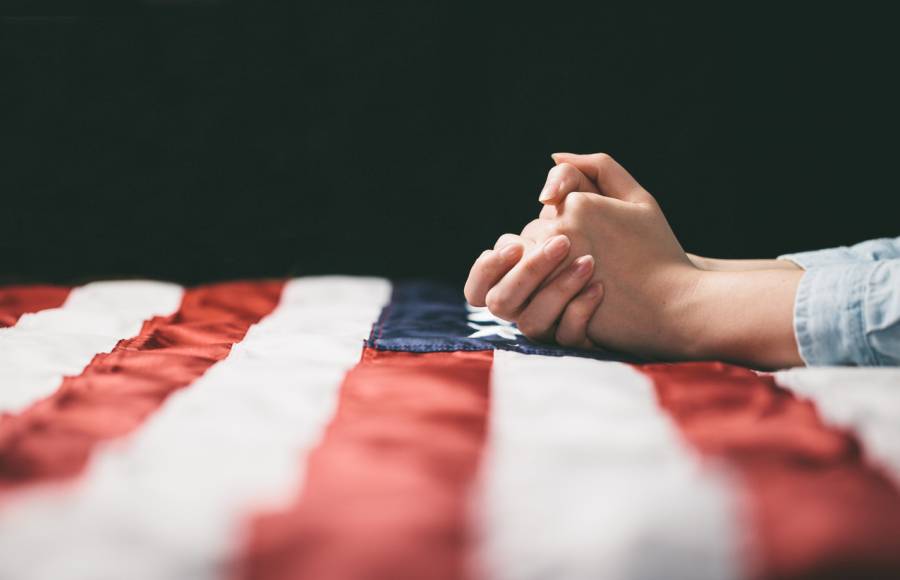 It’s been said that we live in the greatest country in the world, but the success we cherish is not the result of chance. Many early Americans understood that in order for a nation to thrive and prosper, God’s Word must provide the basis for the government and the welfare of society.

Just as water rapidly eroded the banks of the mighty Colorado River and created a vast Grand Canyon, America’s current belief system (relativism) has eroded her foundation and has created a moral void.

Is this foundation worth fighting for? Absolutely, but I’m not talking about physical violence; I’m talking about a spiritual upheaval. Sadly, our gun safes are full but our prayer closets are empty. The battle for our nation will be won only on our knees. Humility will guide us, brokenness will prepare us and perseverance will sustain us.

Interestingly enough, the stability of America is one of the top concerns on the minds of many today. There was a time in recent history when America felt secure in knowing that the most formidable enemies were abroad. Not so today. While we are wisely concerned with terrorist attacks and the rise of China, a greater threat is the corruption within.

America, like the mighty Roman Empire that collapsed centuries ago, is crumbling from within. There are people and groups who are strongly committed to the destruction of anything rooted in our nation’s Christian heritage. They attempt to be “one nation ‘above’ God,” rather than “one nation ‘under’ God.” Scripture identifies this as foolishness, self-exaltation, and arrogance — the downfall of nations. The silence of many churches and pastors is not helping our cause. Silence actually speaks volumes.

There is a saying that one generation plants trees for the next generation. I’m concerned that instead of planting, we are removing and destroying the very covering that protects us. As a result, our legacy as a great and noble nation has all but been forgotten. For instance, most schools no longer teach students about the spiritual foundation that has guided America throughout her history. Consequently, America’s moral and religious heritage is often deleted, grossly distorted, or completely revised.

Students often miss the critical connection between America’s unparalleled greatness, her rise to world leadership, and the spiritual foundation that made it possible. This should concern us. The ideas of the classroom in one generation will create the ideas of government within the next.

Don’t Give Up, Look Up

Before we change policy we must change hearts and seek the heart of God. Before we focus on initiatives we must initiate prayer. Our hope is not in an elephant or in a donkey, but in a Lamb.

There is a large group of Christian leaders who are looking up rather than giving up. I was on a very encouraging zoom call this week led by Brooke L. Rollins. She made a huge impact when she joined the Trump White House to serve as the Director of the Domestic Policy Council. In her words, “The policies we developed were in line with the ideas I had spent two decades pursuing in the public square: restoring hope to American communities, reviving American entrepreneurship and industry, and returning a governing voice to the American people.”

She added, “Men and women of every race, every faith, every ethnicity, every origin, every station — who were the backbone, hope, and sustenance of our republic since its creation benefited from these policies.” As a result, the America First Policy Institute was launched on April 13th, 2021. Check out the very encouraging video in the link above.

The Institute will conduct research in everything from healthcare policy, to national security, to job creation, to criminal justice, and beyond on behalf of the American people. Praise God for bold leadership!

When the Loyalty of the Soldier is Proved

As Daniel Webster rightly noted: “There is no nation on earth powerful enough to accomplish our overthrow. Our destruction, should it come at all, will be from another quarter. From the inattention of the people to the concerns of their government, from their carelessness and negligence.”

As the moral and cultural war rages between our shores, the need to be awakened from our spiritual slumber has never been greater. It’s been said that, “Where the battle rages, there the loyalty of the soldier is proved.”

So, you tell me, is this battle worth fighting for? Absolutely, this battle for the soul of our nation and the future of our children. It’s our choice, do we stand or fall?

Special Note: Most of these points came directly from my book, One Nation Above God. I also recently became so broken over what we are leaving the next generation that I began a lengthy water fast, not knowing that it would be one of the hardest things I’ve ever done. I’m planning to post my experience in May 2021. You can hear about the outcome and join me in fasting by subscribing to my YouTube channel here. Additionally, my new book, 40 Days to Reset Your Life, is scheduled to be released in June. This book demonstrates how prayer and fasting can reset your life and change your spiritual course as well as the course of the nation. You can find my last few articles on sparking a national awakening here.