Is Robert Barron a Bishop of Baal?

Did God punish Elijah for destroying the prophets of Baal, as Bishop Barron suggests? John Zmirak has an answer. 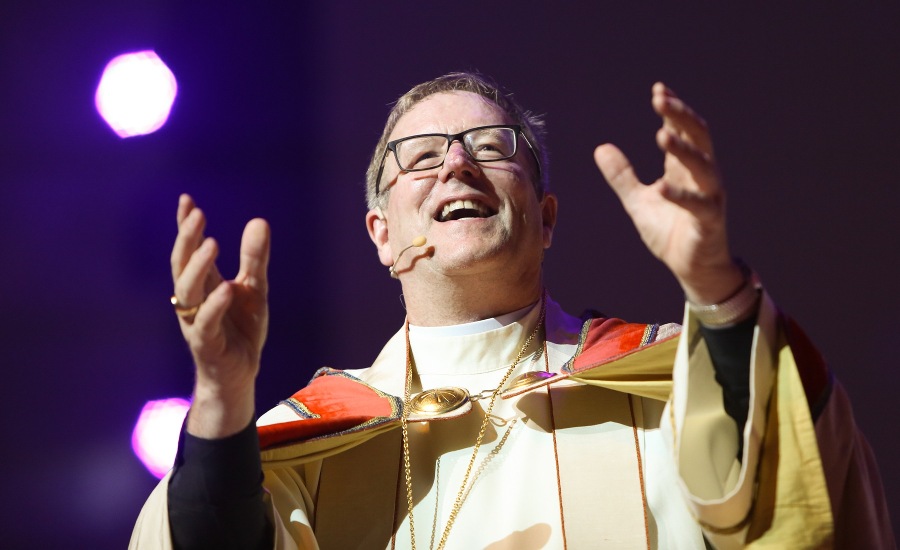 A classic satirical poem, “The Vicar of Bray” describes an all too well-known religious type: a reed who sways in the wind, a pastor who trims his sails to whatever prevailing fashion, with the pretext that his compromises are necessary to his mission.

In the poem, an Anglican vicar goes from High-Church royalist to quasi-Catholic absolutist to Low-Church Whig liberal, without ever missing a beat or expressing a real conviction. His one firm principle he admits in the poem’s chorus:

And this be law, that I’ll maintain until my dying day, sir
That whatsoever king may reign, Still I’ll be the Vicar of Bray, sir.

As a Catholic, I’ve been shocked at many people whom I thought solidly orthodox and faithful when the doctrinally sound Pope Benedict XVI reigned. With the accession of Pope Francis they promptly transformed themselves into liberals. Many used as a pretext the claim that they’re “just following the pope.”

But our church does not demand that believers abandon apostolic moral principles just to suit a faithless pope. I think it far more likely that these “professional Catholics” are just following the money and the power. They are also conveniently shedding Catholic stances that would make them unpopular with our increasingly intolerant Oligarchy.

As Saturday Night Live’s “Church Lady” might have said, isn’t it convenient that Pope Francis (and his countless Vicars of Bray) is shoving aside or obscuring doctrines that attract the hostility of the U.S. government, billion-dollar Woke corporations, globalist power-brokers, Ivy League universities, and social media monopolies?

The P.T. Barnum of the Catholic Church

One of the most blatantly opportunistic public figures in my church has been Robert Barron. When John Paul II and Benedict XVI were pope, he assiduously cultivated an image as a defender of traditional faith. He raised tens of millions of dollars from well-meaning believers who bought into that image, and got himself named a bishop. But as soon as Francis took power, Barron’s skin instantly changed color to match his new environment. As Jason Jones wrote here:

He is all things to all popes, it seems.

Out of the hundreds of thousands of words that emerge annually from Barron’s personal media empire, I have strained to hear him speak anything prophetic on behalf of the weak, the abandoned, the desperate. This bishop with so much influence, who appears on network TV shows, doesn’t talk much about the unborn. I didn’t hear him defend David Daleiden, when the state of California (where each of them lives) decided to persecute Daleiden for exposing Planned Parenthood. When Barron appeared in a video with Ben Shapiro, who challenged him to evangelize for Christ, Barron demurred. He pretty much shrugged, and said that there were other paths to salvation.

The reason I bring up Barron is that he is useful, in the same way a weathervane is. Such a man is keenly attuned, with senses like a cheetah’s, to which way the wind is blowing. If you see him pointing one way, you can be certain that it’s the direction where the powerful want us to walk. It’s the destination marked out for us by Caesar, Mammon, and Sodom. And we ought to run, not walk, in the opposite direction.

When You Attack the Priests of Baal, I Take That Personally

The latest pastoral reflection from Robert Barron might shock the reader, assuming he hasn’t been jaded by the experience of trying to remain Catholic under Francis. In this talk, Bishop Barron (get ready) denounces the prophet Elijah.

That’s right. According to Barron, when Elijah made a fool of the priests of Baal by showing them up as powerless (their sacrifices didn’t catch fire, while Elijah’s to Yahweh did), that was good. That was inspiring. But then Elijah went wrong. He engaged in shocking “violence.”

He allowed his followers to slaughter those false priests and prophets. And that was wrong, according to Barron. It angered God, who promptly “fired” Elijah and replaced him with Elisha. As a punishment and a warning to future prophets, apparently. Here’s the video posted by Barron’s own media company:

Bishop Barron says Elijah was “fired” by God for slaying the prophets of Baal pic.twitter.com/q6G7o8qFQm

Your Punishment: A Flaming Chariot to Heaven

Now, have any of you ever been taught that God rebuked Elijah? Probably not, because it’s not in the text. After his victory, Elijah must flee for his life, but only because the evil queen Jezebel (conduit for foreign idolatry in Israel) commands her servants to massacre Elijah and his followers. In the wilderness, God speaks to him, in the form of a “still small voice.” There is no hint of God reproving him.

But Elijah is old, and it’s time for him to go to his reward. God guides him to Elisha, who willingly takes on his mantle. Then Elijah is … assumed into heaven on a flaming chariot. If that’s how God “fires” errant servants with whom He is angry, I wonder what He does for those who don’t offend him! Furthermore, Elijah is privileged to appear along with Moses flanking Jesus at the Transfiguration.

The Sacred Name of LGBTQMYNAMEISLEGION

Over and over again throughout the Hebrew Bible, God calls idolatry the most fundamental sin, and commands His people to root it out … if necessary by violence. The worship of Baal was especially repugnant, as a fertility religion that sometimes entailed child sacrifice and male prostitution.

So why would Bishop Barron take the time and bandwidth to condemn perhaps the greatest prophet of the Old Testament, for implementing the punishment God explicitly demanded for idol-worshipers?

I can’t read minds, especially ones as slippery and shifting as Robert Barron’s. But a bishop determined to stay on the side of those in worldly power might well find it opportune to condemn … not the sacrifice of innocents (abortion) or sexual perversion (LGBTQMYNAMEISLEGION).

Instead, he’s much safer decrying religious zealotry, repeating the narrative of the Biden Pentagon that traditional believers are incipient “extremists,” Christian Nationalists, insurrectionists, and Election Deniers.

In my columns here, I’ve repeatedly called the promoters of Woke ideology and servile, accommodationist Christianity “Priests of Baal.” I think it’s our job to mock them gleefully, and crush them politically. But then I wasn’t looking for job at the court of Ahab. Bishop Barron is clearly interested in a chaplain’s position there. And I have faith that he’ll get one.

Caesar, Mammon, and Sodom Unite in the Great Reset of Churches