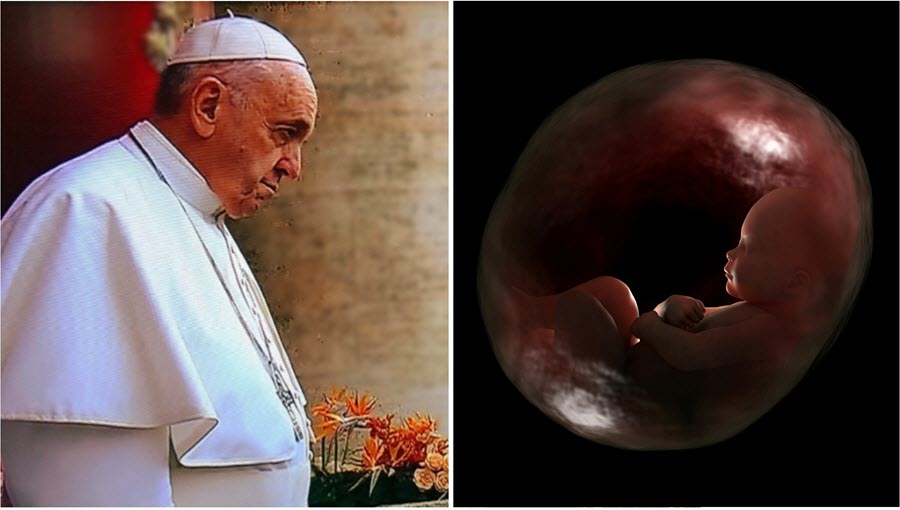 Pope Francis appears to be preparing the Catholic Church to abandon its historic opposition to abortion for the sake of his geopolitical agenda, as recent events indicate.

On May 7, Cardinal Luis Ladaria issued a letter from the Vatican discouraging American bishops from preventing elected officials who support abortion to receive Communion. Ladaria, prefect of the Vatican’s Congregation for the Doctrine of the Faith, is the highest authority on Catholic theology after the pope.

Ladaria released the letter after several bishops publicly said Joe Biden, who supports abortion, should not receive Communion. San Francisco Archbishop Salvatore Cordileone even wrote a forceful pastoral letter on the subject, without mentioning Biden. But other bishops, such as Cardinal Wilton Gregory of Washington, D.C., said they would welcome Biden at Communion.

A church-going Catholic, Biden was denied Communion by a priest in Charleston, S.C. while campaigning in that state in 2019.

The Catholic catechism describes abortion a “moral evil,” calling it and infanticide “abominable crimes,” and demands excommunication for anyone involved in “formal cooperation.” Catholic canon law states that Catholics “persevering in manifest grave sin are not to be admitted to holy communion.” Catholics who “are conscious of grave sin” can’t receive Communion “without previous sacramental confession.”

But Ladaria’s letter not only appears to contradict canon law. It de-emphasizes abortion as a moral benchmark.

Ladaria wrote that any policy the American bishops develop “would best be framed within the broad context of worthiness for the reception of Holy Communion on the part of all the faithful … reflecting their obligation to conform their lives to the entire Gospel of Jesus Christ as they prepare to receive the sacrament.”

“It would be misleading,” Ladaria continued, “if such a (policy) were to give the impression that abortion and euthanasia alone constitute the only grave matters of Catholic moral and social teaching that demand the fullest level of accountability on the part of Catholics.”

Moreover, Ladaria describes those who support abortion as “pro-choice.” His letter could be the first official Vatican document to use the partisan term.

Why would Ladaria take such an approach? Because Francis wants environmental sustainability and economic justice to define his papacy.

One week after Ladaria issued his letter, the Vatican held a one-day conference, “Dreaming of a Better Restart.” The conference featured sessions on “Financial and Tax Solidarity” and “Integral Ecological Sustainability.” John Kerry, Biden’s climate envoy, delivered the keynote speech for the second session.

For the pope, achieving his geopolitical goals means embracing the humanist vision of utopia promoted by non-governmental organizations and their corporate sponsors. But that vision includes abortion as necessary to control population worldwide.

One of that view’s most prominent advocates is economist Jeffrey Sachs. He called abortion “a lower-risk and lower-cost option” to prevent the birth of “unwanted children” in his book, Common Wealth: Economics for a Crowded Planet.

Legalizing abortion “reduces a country’s total fertility rate significantly, by as much as half a child on average,” Sachs wrote.

Sachs not only drafted the United Nations’ Sustainable Development Goals. He also became one of Francis’ key advisors.

Vatican speaker Jeffrey Sachs has called abortion “a lower-risk and lower-cost option” to prevent the birth of “unwanted children.”

The Vatican’s recent conference on health care provided numerous signs of Francis’ relaxed attitude toward abortion, as The Stream detailed. Moderna, which produces a COVID-19 vaccine using experimental mRNA technology, provided major funding. CEO Stephane Bancel, spoke on how the technology can be used to treat other diseases.

But Moderna used aborted fetal cells to produce the spike protein in its vaccine.

Francis’ bishops promote his priorities. Bishop Marcelo Sanchez Sorondo, the chancellor of the Pontifical Council for Sciences and Social Sciences, even praised China during diplomatic negotiations in 2018.

“Right now, those who are implementing the Church’s social doctrine the best are the Chinese,” he said. “They search for the common good and subordinate everything to the general welfare.

Sorondo noted China’s use of Laudato Si in “defending the dignity of the person” and “assuming a moral leadership that others have left.” Those comments referred to the United States’ withdrawal from the Paris Agreement on carbon-dioxide emissions.

Never mind that China ranks among the world’s worst air polluters, performs between 10 million and 23 million abortions a year — many forced by the government — and persecutes Christians who worship outside of state-approved churches. China even profits from human organs stolen from living Uyghur prisoners of conscience in concentration camps.

But Francis is no outlier. He’s the logical product of the Vatican’s embrace of globalist materialism, which began at the Second Vatican Council in the early 1960s.

“All things on earth should be related to man as their center and crown,” declared Gaudium et Spes, a pastoral document focusing on politics and economics, which made no mention of then-expanding Communism. Therefore, societies must provide “everything necessary for leading a life truly human, such as food, clothing, and shelter.”

Two popes later expanded that call by advocating centralized global governance. To achieve what he called “a full-bodied humanism,” Paul VI called for international agencies to manage the world’s economic and political development.

“Such international collaboration … certainly calls for institutions that will promote, coordinate and direct it, until a new juridical order is firmly established and fully ratified,” Paul wrote in his 1967 encyclical, Populorum Progressio. “We give willing and wholehearted support to those public organizations that have already joined in promoting the development of nations and we ardently hope that they will enjoy ever growing authority.”

A Global Government “With Real Teeth”

In 2009, Benedict XVI went even further. In his encyclical Caritas et Veritate, Francis’ predecessor demanded that the U.N. govern international and domestic economics.

“There is a strongly felt need … for a reform of the United Nations … and, likewise of economic institutions and international finance, so that the concept of the family of nations can have real teeth,” Benedict wrote. “To manage the global economy … to bring about integral and timely disarmament, food security and peace; to guarantee the protection of the environment and to regulate migration: for all this, there is urgent need of a true world political authority.”

Such a body, Benedict wrote, must “have the authority to ensure compliance with its decisions from all parties” in its quest to “establish the common good.”

A Global Redistribution of Wealth

What is that common good? A “directed” global economy that will “open up the unprecedented possibility of large-scale redistribution of wealth on a world-wide scale,” Benedict wrote. That goal includes “a worldwide redistribution of energy resources, so that countries lacking those resources can have access to them,” he wrote.

“Reflecting the (teaching authority) of Pope Benedict XVI, and specifically his encyclical Caritas et Veritate,” Winters wrote, “concern for a just economy might have received a more fulsome treatment or at least placed higher on the list.”

If a Catholic commentator reached that conclusion, then the pope certainly has.