Is God Making a Comeback? 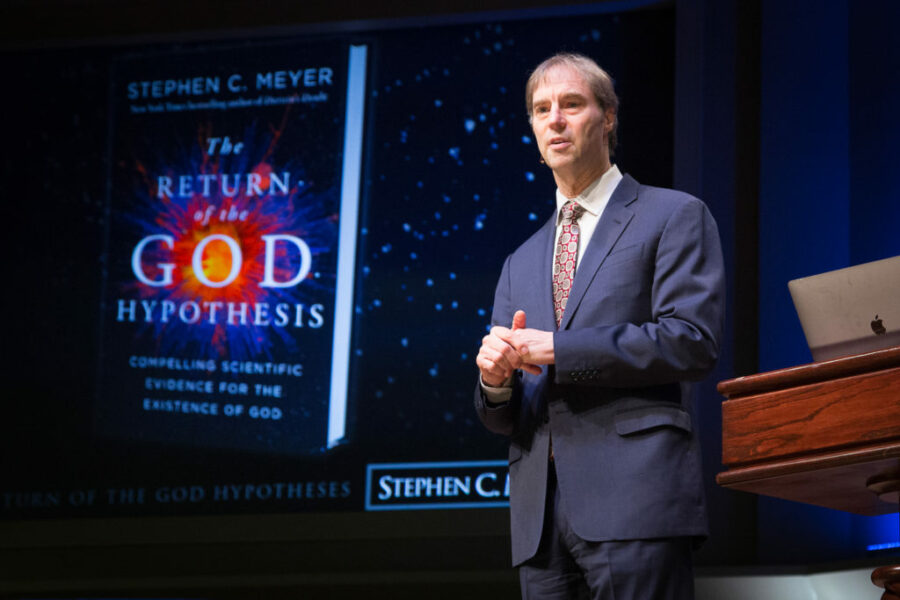 Is God making a comeback? Philosopher of science and Discovery Institute fellow Steve Meyer thinks so, and he’s written a new book to explain why. Readers can now get their own copy of Return of the God Hypothesis wherever books are sold. To celebrate the release, I sat down with Steve for a deep dive on behalf of Evolution News, to be published as a series exclusively on the ENV website. Meanwhile, Stream readers can enjoy a sneak peek right here.

If God is making a comeback, where has He been all this time? Well, literally speaking, He didn’t go anywhere. He’s just been banished from the landscape of respectable “scientific” discourse.

But if one takes the long view of history, this dramatic banishment happened very recently indeed. It wasn’t so long ago that even notorious freethinkers like Voltaire took God’s existence as a matter of course. But with the rise of methodological naturalism and the wide acceptance of naturalistic frameworks like Darwinism, a new consensus gradually formed that God had been put out of a job.

Theism became a fringe view, something “serious” academics didn’t entertain in public if they wanted to be “respectable.” If the word “God” pops up in a physics book, like Stephen Hawking’s Brief History of Time, it’s understood to be metaphorical, a place-holder word for the ultimate all-explaining mathematical principle.

What happened? The status game changed. “We’ve become very guild-oriented in science now,” Meyer says, “where only people within the particular guild are allowed to think about particular problems. And … within those insular guilds, you can develop a group-think based on certain sets of presuppositions that may or may not need to be challenged, but sometimes are destructive of real progress and understanding things.”

With Return of the God Hypothesis, Meyer wants to issue just such a challenge. Poking at presuppositions across the sciences, he builds and expands on his arguments for intelligent design as developed in Signature in the Cell and Darwin’s Doubt, but with a key difference: He now openly puts the name “God” to the designer.

Inference to the Best Explanation

Popular atheists like Richard Dawkins, or even pioneers like Crick and Watson, have been known to float some openly “out there” theories in the past. For example, panspermia, which, as Wikipedia defines it, is “the hypothesis that life exists throughout the Universe, distributed by space dust, meteoroids, asteroids, comets, planetoids, and also by spacecraft carrying unintended contamination by microorganisms.”

In other words, we’re not saying it’s aliens. But…aliens.

Yet Meyer doesn’t just laugh off the aliens hypothesis, or any of the hypotheses in cosmology or biology that have gained currency to explain things like the origin of the universe, the origin of biological life, or fine-tuning. Instead, he takes the gauntlet Richard Dawkins throws down when he says that “the universe has exactly the properties that we should expect if at bottom there is no purpose, no design, no evil, no good, nothing but blind pitiless indifference.”

“Well,” said Meyer in our discussion, “blind, pitiless indifference is a shorthand for saying materialism, strict materialism. So he’s a scientific materialist, and he thinks that the properties that the universe possesses are exactly what you’d expect if you were a scientific materialist and not what you’d expect if you were a theist or a deist or something like that. And so that’s, in a sense, a beautiful framing for the discussion: Is that the case?”

The Cabin In the Woods

Meyer told me he believes the most important chapter of the book may be Chapter 11, in which he introduces a new way to frame his argument that God is indeed the best explanation for everything. We might intuitively sense that the God hypothesis beats the aliens hypothesis, but how could we model this mathematically? And can we do it without having exact numbers to put to everything? The answer, known in the philosophical literature as Bayesian inference, is named after the Reverend Thomas Bayes (1701-1761).

To introduce the technique, Meyer uses an illustration for which he credits Western Michigan University philosopher Tim McGrew, who acted as a technical consultant on this portion of the book. Suppose you’re hiking in the forest, and you come across a ramshackle old cabin. Is it inhabited or not? Your first guess will reasonably be “Probably not.” But as soon as you walk in, another picture emerges. There’s a kettle on the stove, dishes in the sink, and a shower running in the background. Your hypothesis is due for an update, it would seem.

In our interview, Meyer stressed the key point that “before going in, he couldn’t have quantified what the exact probability would be of finding a steeping cup of tea on the table, or dishes in the sink, or any of those things. But, once seeing them, he knows that given the hypothesis of the cabin being inhabited, the ‘cabin inhabited’ hypothesis, given that evidence, is much more probable than the ‘cabin not inhabited’ hypothesis. And so the relative probabilities are obvious, even if you can’t put specific numbers on both the numerator and the denominator. That’s the point.”

This is particularly helpful when it comes to questions like the origin of the universe, where nobody could say in advance exactly how probable it is that God would create our universe discretely in time. “But,” Meyer explains, “once you understand that there was a discrete beginning, it is certainly more likely to have been the case given theism than given materialism, which says that the universe is eternal and self-existent.”

“At the end of the day,” he summed up to me, “there is a way to refute the God hypothesis, but only at the expense of losing the reliability of the human mind and therefore science. So you can have God and science, or you can have no God and no science, but you can’t get no God.”

One Power or Two?

Of course, it’s easy to blame secular materialism for everything. But unfortunately, too many Christians have followed academic fashion in their own way, proposing that while God might have “frontloaded” all the information necessary for the universe in one massive beginning explosion, He wouldn’t have intervened after that one fantastic billiards shot. 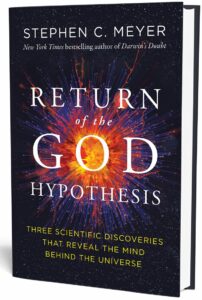 Meyer carefully addresses and rejects this sort of “soft deism” in the book as well. He argues that legendary scientists like Isaac Newton and Robert Boyle would beg to differ. They “affirmed what medieval theologians called the two powers of God, the potentia ordinata, the ordinary power that was responsible for the regularities that we observe, and also God’s fiat power, or the potentia absoluta, his ability to act as an agent within the orderly concourse of nature he otherwise sustains and upholds.”

Meyer believes this “robust theology of nature” is what we so desperately need to recover as Christians who do science, or, in his case, philosophy of science.

Unfortunately, “Today, many modern religious believers, in particular biology professors at Christian colleges, under the press of the naturalistic framework for doing science, are loath to affirm the second power of God.”

Might this change? Sociologically, the prognosis may be dim, but objectively, Meyer makes a strong case that Newton and Boyle are not out of fashion. Indeed, they are more fashionable than ever.

What about people who aren’t elite academics? Are they asking these questions anymore? Are they really interested in having conversations about whether God exists, or whether Jesus rose from the dead?

British theologian Alister McGrath doesn’t seem to think so. “Rational proofs of God’s existence—I mean, who is asking that question anymore?” he says in an interview with Christianity Today. “Logical proofs of the resurrection? Who’s asking?” He suggests, “We must move away from truth in the Enlightenment sense. People are interested in hearing about the difference faith makes to real life, rather than bald statements about truth.” “My faith brings me hope,” he says, “and yet I hardly ever hear an apologist talk about hope.”

I asked Meyer how he would reply to this. He says first of all, it’s simply not true that people are no longer asking these questions. He personally encounters them constantly, from older and younger people alike. But second of all, by downplaying the importance of “bald statements about truth,” Meyer pointed out that McGrath implicitly falls into a pragmatic mode of speaking, emphasizing the utility of Christianity over the question of whether the truth claims underneath it are a useful fiction or a “true myth” (to quote C. S. Lewis, ironically one of McGrath’s heroes).

In fact, Meyer counters, the “enervating” realization that one is just “indulging in a fantasy” without the connection between objective truth and pragmatic “truth” is “what leads people not to be interested in religious questions.” God as a concept, he maintains, confers no hope. “Only the reality of God confers hope.”

Fortunately, we don’t have to live in fear that we have banked on a fantasy. The reality of God is as decisively evident as it always has been. This Easter season of all Easter seasons, that’s some good news.