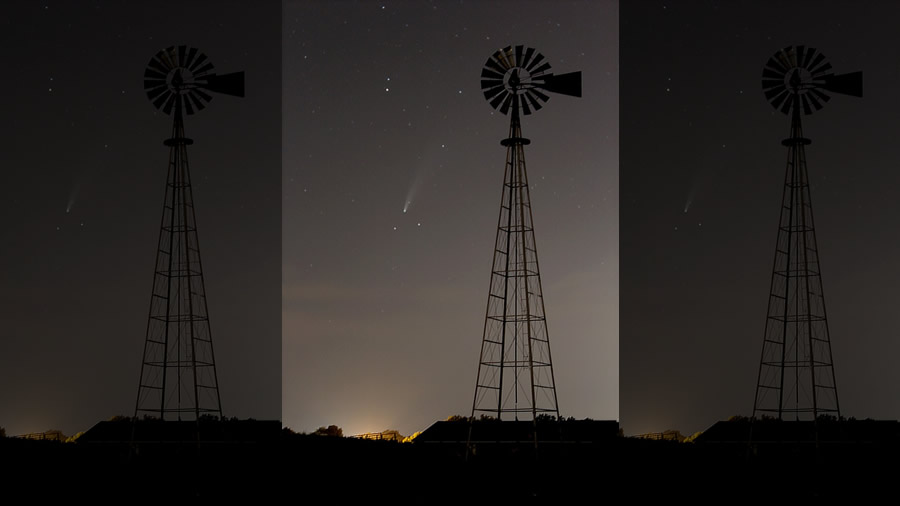 You may have missed the great comet of the last century, Hale-Bopp, in 1997. If so, right now you have another chance to see a comet. Comet NEOWISE slipped into the evening skies a few days ago, and it has been climbing steadily above the dusk glow every night since. It becomes visible to our eyes only one every 6,800 years. The last humans to see the comet lived 2,800 years before Abraham left Ur of the Chaldees.

Dark moonless skies have given even casual observers great views, and photographers have produced stunning pictures. I observed it the last couple nights away from city lights and could see its tail with my naked eye. (I took the picture accompanying this article.)

If you want to photograph it, you will need to mount your digital camera on a tripod, set the ISO to at least 800, and take at least a 20 second exposure. Look towards the northwest between the horizon and the Big Dipper at least 30 minutes after sunset. You can check out the finding charts here.

The visitor is fading, however, and the moon returns to the evening skies mid-week, overwhelming the light of the faint comet. So, the next few nights will likely be your last chance to spot it. If you have a pair of binoculars or a telescope, you can continue to follow it through August.

In ancient times, astrologers and others viewed eclipses and comets as harbingers and omens. They tried to divine messages from these omens and deliver them to their rulers. The Jewish scholar Josephus, for instance, believed that the apparition of a comet (Halley’s) in 65/66 AD, which appeared as a sword over Jerusalem, foretold the destruction of Jerusalem in 70 AD.

Given this history, it’s hard not to notice that 2020 has also been an eventful year — to say the least. Many countries have shut down their economies to deal with a pandemic. Violent riots continue not just in the US, but around the world. Historic churches burn in France and the US. The most famous church in history, the Hagia Sophia, has been converted into a mosque. Millions of Christians speculate that the end is near. And this wild ride isn’t over yet.

Genesis tells us that God created the heavenly bodies, at least in part, “for signs and for seasons and for days and years.” So, you might wonder: Is comet NEOWISE a sign of these and other dreadful events still to come? Is God trying to tell us something with this comet?

We should be careful about trying to read too much into this.

First of all, comets are, by themselves, ambiguous signs. We’re more likely to read meaning into their appearance, rather than out of them.

After all, comets follow a regular schedule. These cosmic snowballs are all members of our Solar System. They orbit the Sun with the planets and asteroids. They just have elliptical orbits that send them into the outer regions far from our host star. As a result, we see them only when they visit our neighborhood in the inner part of our Solar System. They might seem to appear at random, unlike the moon and other planets. But they still keep a regular schedule.

Second, they’re not all that rare. Bright comets visit our skies several times a century. Hale-Bopp was one of the brightest comets of the last few centuries. It likely was the most observed comet in human history.

Comet Halley’s 1985/6 apparition was not as impressive, though it’s 1910 apparition was a good one. Historically, 1997, 1985/6 and 1910 were not all that noteworthy. Of course, one can go back and scour the headlines and associate any event with a bright comet. But that would be cherry picking.

There’s also the danger that if people believe a comet is a portent of doom, then they may do harmful things they might otherwise not have done. For example, the 1910 apparition of Halley’s comet added to the unrest just prior to the Xinhai Revolution in China.

Third, reading omens from regular celestial events can easily pass over into the occult, especially if we use them to guide our actions. In fact, the Bible prohibits the practice of interpreting omens (Deut. 18:10-12). So, we should be careful in looking for signs where they don’t exist.

Of course, God can and does use celestial events as signs. The Star of Bethlehem is our best example. Some scholars think it was a comet. But in its details, it provided a unique sign, a pointer to the coming messiah, not an omen.

The Glory of God

In general, Christians should resist the worldly temptation to use the sky to foretell the future. It makes sense that comets, eclipses, and the like sometimes terrified our ancestors. But in most cases, we should read these events not as omens, but as highlights of the heavens “declaring the glory of God and “proclaiming his handiwork” (Psalm 19).

Indeed, the heavens do that even in a very bad year.

Guillermo Gonzalez is an astronomer and Senior Fellow of the Discovery Institute. He received his Ph.D. in astronomy from the University of Washington, Seattle in 1993. He is also co-author, with Jay W. Richards, of The Privileged Planet: How our Place in the Cosmos is Designed for Discovery.