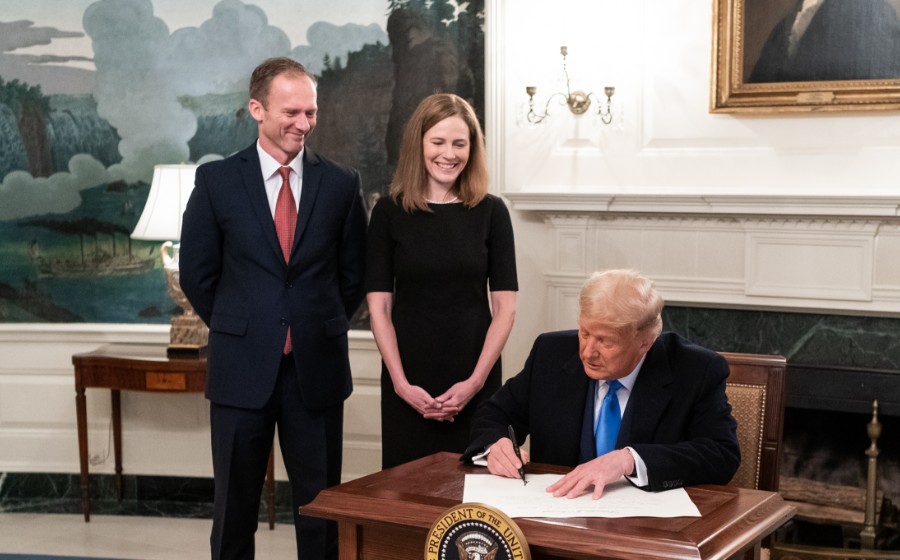 The new associate justice of the Supreme Court, Amy Coney Barrett, has been portrayed as a submissive “handmaid” — a head hanging, meek little mouse, an object for men and a mute baby machine.

If her critics aren’t quite as harsh as that, they worry that, despite her stellar accomplishments and sharp intellect, she is in favor of keeping women “barefoot, pregnant and in the kitchen.”

Much of the criticism is based in Justice Barrett’s unashamed Christian faith and her participation in the People of Praise community. Critics accuse Christians of keeping women in bondage. They point to a key passage from St. Paul’s letter to the Ephesians:

That clinches it doesn’t it? Women are supposed to be subject to men and second rate citizens.

St. Paul is certainly reflecting the standards of his day in the Roman Empire two thousand years ago, but when we know more about the historical context, the passage actually reveals early Christianity’s remarkably liberal attitude to women.

In his enlightening study of Roman civilization, the sociologist Rodney Stark tells us how women were treated in the Roman Empire in the time of St. Paul. In his book, The Rise of Christianity: How the Obscure, Marginal Jesus Movement Became the Dominant Religious Force in the Western World in a Few Centuries, Stark explains that women were married off by their fathers for a good price at around the age of twelve or thirteen. Regarded as just one step above a slave by the strictly hierarchical system, most girls were destined to a life of drudgery and child bearing.

In his book Dominion: How the Christian Revolution Remade the World, historian Tom Holland relates how the male Roman citizen had no concept or what we would understand as marital fidelity. He considered it his right to have sex with anyone he fancied. That a Roman male should be sexually faithful to his wife was unheard of. She was there to provide legitimate children, not necessarily to be loved or to be a faithful partner and friend. Neither did she have any rights. The man could divorce her at will and send her packing.

Given this context, Christian teaching about men, women and marriage actually liberated women in a radical new way.

Breaking the Old Order From the Inside Out

St. Paul’s typical style of teaching was to break the old order from the inside out. He picked up on the Roman custom of women being subject to their husbands, but expands the idea to give it a new dimension of meaning, then goes on to plant a seed that would break that image from the inside out.

Paul does say women should be subject to their husbands, but he establishes this principle to illustrate a Christian’s relationship to Jesus Christ. The symbolism is easy to understand: Jesus is like the bridegroom. We are the bride. This imagery dates back to the Old Testament and to Jesus himself, who used marriage imagery in his stories and called himself “the bridegroom.”

So rather than simply affirming the submission of women, St. Paul uses that existing custom to illustrate the Christian’s relationship to Jesus Christ. Then he pushes the symbolism into a totally new territory.

He goes on to say that the husband should “love his wife as Christ loved the church and give himself up for her.” According to Christian theology, Jesus died for us. Therefore Paul is saying the husband must give himself up in total, loving service for his wife — even to the point of death!

In the Roman society of Paul’s time, this was totally unheard of. It was a radical departure from the customs of the day, and one which served to liberate women from the virtual slavery of the Roman time period.

That Paul’s teaching was not demanding slave like submission of the woman to the man is confirmed at the end of the passage where he says simply, “However, each one of you also must love his wife as he loves himself, and the wife must respect her husband.” In other words, a Christian marriage is built on mutual self-giving, respect and equal dignity.

We know the implications of Paul’s radical teaching bore fruit in the early church. In the Acts of the Apostles, we learn of women leaders in the church — the teacher Priscilla with her husband Aquila, Dorcas the hostess of a house church, Mary Magdalene and, most of all, Jesus’ own mother Mary, who Catholics hail as the holiest and most powerful of God’s creatures.

Rodney Stark points out that the radical new understanding of marriage and women’s rights in the young Christian movement was one of the most attractive aspects of the faith, and one which drew many converts. Put simply, Romans locked in the old way, of cruel submission of women to men, saw how the Christian couples loved and respected one another and said, “I want some of that! Where can I sign up?”

Have Christian men failed to live up to this high calling down through the centuries? Yes we have. The record of Christian men oppressing women and taking St. Paul’s words in Ephesians out of context to force women into submissive roles is out there. This is an abuse and a misunderstanding of the Christian teaching.

It seems that Ms. Barrett and her husband work together as a team. With mutual respect they support one another professionally and within their large family.

However, there are also countless examples of Christian marriages which are full of love, mutual respect and dignity for both husband and wife. If appearances are realities, Justice Amy Coney Barrett and her family are an example of how things should be.

It seems that Ms. Barrett and her husband work together as a team. With mutual respect they support one another professionally and within their large family. They would seem to bring out the best in one another — the wife being submissive to the husband’s love and the husband loving the wife with the gift of total self-giving.

Are such arrangements always blissful and perfect? Of course not. And I expect the Barrett family would tell you of all their frustrations, trials, temptations and failures to live up the high ideal. But at least the ideal is in place. The Christian ideal is not one in which the woman is a sniveling, submissive doormat yielding to the husband’s every whim — but it is a relationship of mutual respect, admiration and self-sacrifice.

Fr. Dwight Longenecker is a Catholic pastor in Greenville, South Carolina. His latest book Immortal Combat-Confronting the Heart of Darkness explores the tensions in modern society.